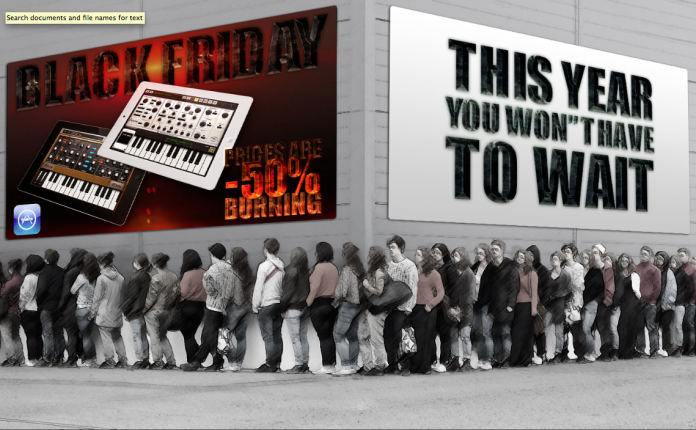 The iOS market keeps flourishing and Arturia have made 2 very nice additions for tablet based synths. You won’t even have to wait in line for this one.

Music software and hardware company Arturia is pleased to announce that it is offering generously discounted $4.99 USD/€4.49 EUR sales pricing on each of its critically-acclaimed iMini and iSEM soft synth apps for Black Friday from Friday, November 29 through to Sunday, December 1…
iMini is an authentic recreation of the 1971-vintage MinimoogTM * monosynth for Apple’s all-conquering iPad. It is based on the TAE® (True Analog Emulation) synthesis technology found in Arturia’s award-winning Mini V soft synth, meticulously modelling the distinctive tones and analogue nuances of the legendary MinimoogTM. Moog changed the musical world with the MinimoogTM and Arturia helped change the music software world with the Mini V. And Arturia subsequently succeeded in broadening its appeal still further by introducing iMini to transform any iPad (2 or above) into the ultimate classic analogue synth emulation. Those timeless three oscillators and that 24dB per octave fabled filter can all be seen and heard in iMini. Today, thanks to the iOS 7-supporting INTERAPP AUDIO TRANSPORT feature found in V1.2, users can connect and control other similarly-supportive apps with the greatest of ease, letting them concentrate on what they do best — making music whenever and wherever the mood takes them!

Like Arturia’s award-winning Oberheim SEM V desktop (or laptop) software solution before it, iSEM also uses TAE® to faithfully reproduce the analogue warmth and ingenious interface of the 1974-vintage Oberheim Synthesizer Expander Module® (SEM) to which it owes its inspiration and name, but brings it all kicking and screaming to this day and age in the most musical and ingeniously interactive ways possible by making the most of latest developments available to its iPad host. The dual-oscillator SEM was originally conceived as a way of beefing up weaker-sounding compatible analogue monosynths of the time before becoming a sought-after sound in its own right — so much so that its American creator came up with a series of successive SEM-based keyboard instruments, including the Two Voice, Oberheim’s first self-contained compact, duophonic synthesizer in 1975, and enormous Eight Voice (eight SEMs set across two tiers together with the trailblazing Polyphonic Synthesizer Programmer) in 1977. On the surface, anyone at all familiar with the original Oberheim SEM will immediately feel right at home when launching iSEM since the majority of its MAIN screen mirrors the layout and associated controls of Oberheim’s hardware, yet iSEM offers a whole lot more besides, including inbuilt Inter-App Audio, allowing users to send MIDI commands and stream audio between apps on the same device, and a voice programmer that makes simulating Oberheim’s original Eight Voice hardware heavyweight a breeze. Get iSEM and get back to the future of that still-sought-after Oberheim sound with Arturia!
Today, then, there’s really no excuse for not taking those history-making MinimoogTM or Oberheim SEM sounds anywhere anytime with iMini and iSEM — all the more so with those generously discounted $4.99 USD/€4.49 EUR sales prices for Black Friday calling out your name! Now’s the time to act, though… this time-limited offer ends after Sunday, December 1.

Appropriate iPad owners can purchase and directly download iMini and iSEM for $4.99 USD/€4.49 EUR apiece between November 29 through to Sunday, December 1 from Apple’s App Store here: https://itunes.apple.com/fr/artist/arturia/id549089551 (Thereafter, they revert back to their regular $9.99 USD/€8.99 EUR pricing, respectively.)