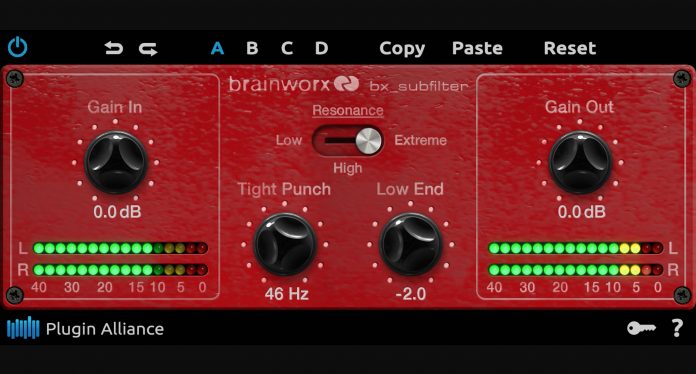 Plugin Alliance makes incredibly useful tools for mixing and processing. Just look at bx_Console (Review HERE). Now low end can be tamed and shaped easily in just one easy tool. I’ve already installed it and threw it on bass and kick drum and the results are surprisingly quick and DEEP.

SANTA CRUZ, CA, USA: Plugin Alliance, a new ‘Über-standard’ supporting all major plugin formats and uniting some of the best-known international audio companies under one virtual roof, is proud to announce availability of bx_subfilter — an AAX Native and DSP-, AU-, VST2-, and VST3-compatible sub-shaping, punch-pronouncing processing plugin perfect for bringing clarity and definition to tracks that have troublesome low frequencies — fresh from founding partner Brainworx as the sixth addition to Plugin Alliance’s altruistic FREE category, as of April 11…
Polishing a mix’s low end can be tricky. Trying bass guitar DI tracks can sound ‘mushy’ and kick drum tracks can lose their ‘pop’. Put it this way: everything below 100Hz can sometimes become such an undifferentiated ‘soup’ of noise that it is difficult to know just where to start. So why not start with bx_subfilter.
By borrowing from the Filter section of its bigger bx_subsynth sibling, recently released by Plugin Alliance to considerable critical acclaim alongside artistic admiration from the likes of producer/remixer/DJ Dave Audé (Mark Ronson, Sting, Beyoncé), bx_subfilter is the perfect fit for anyone interested in bx_subsynth’s subharmonic strengths when it comes to unique low-end filtering but with no need for its subharmonic synthesis capabilities. Cleaning up troublesome low frequencies need not break the bank, nor need it be an overly-complicated EQ’ing exercise, thanks to bx_subfilter.
But bx_subsynth is a unique processing plugin built around the digital heart and soul of the (discontinued) dbx 120XP Subharmonic Synthesizer, using founding Plugin Alliance development partner Brainworx’s M/S (Mid-Side) matrix technology to control the stereo field and add sub, punch, and saturation to sounds; so what is bx_subfilter? It is actually a carefully crafted resonant high-pass filter that changes dramatically with frequency, designed by none other than Dirk Ulrich — owner of Brainworx — to solve the specific problem of tightening a sound’s core while removing unwanted muddiness from the low end. Ease of use and addressing the need for speed comes courtesy of its intuitive interface implementation, featuring four knobs only. Of those, Tight Punch controls a resonant high- pass filter that is specifically formulated for cutting problem frequencies in bass-heavy tracks while the Low End control applies a post-Tight Punch shelving EQ to achieve a perfect frequency-balanced sound. Self-explanatory Gain In and Gain Out controls are available for level matching and preventing clipping.

Clearly, then, bx_subfilter shares the same awesome analog-style filtering present in its bigger brother, but boasts an added bonus of selectable (Low, High, and Extreme) peaks for Resonance, rendering further flexibility for dealing with sources of varying bass content and production needs. Needless to say, eliminating subharmonic rumble and noise while emphasizing the ‘sweet spots’ in bass-heavy tracks, like bass guitars or kick drums, comes quickly and easily with bx_subfilter. But best of all… it is available for free from Plugin Alliance!