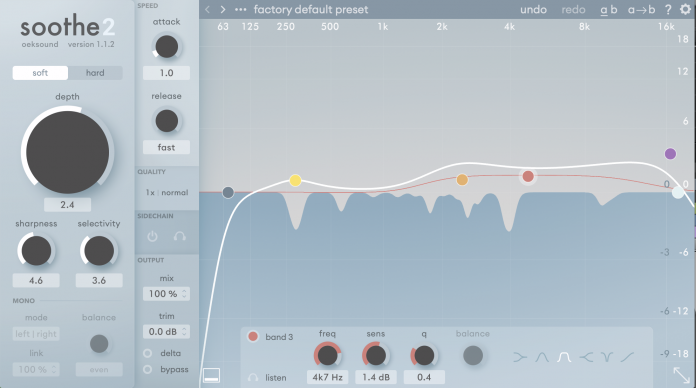 Yes, Everything Recording is a little tardy to the Oeksound party, but we’re a small operation over here. Better late than never, right? Either way, huge names in mixing have been singing Soothe’s praises (then probably using it to correct the harshness in said praises). Either Oeksound has some serious dirt on several well-known mix engineers (we know how NAMM is), or Soothe2 is the real deal. Let’s get to it.

Expensive Hardware Can’t Fix It All

Every person creating and recording music knows the pitfalls of audio all too well. This is why Everything Recording exists – you are on an existential “Eat Pray Love” virtual trip around the world of audio, and we are mere tour guides. If there is one thing my journey has taught me, it’s this – expensive hardware can’t fix everything.

A vintage Telefunken U 47 run through a Neve 8068 and into a Rev H 1176 can’t fix a nasally singer or someone strumming too hard with that drink coaster they call a pick. How do I know this? Well, I’ve recorded on that very signal chain, and when I hit certain notes, sounded a little harsh. I was also nervous being at a world-class facility and strummed way too hard tracking acoustic guitar. Yes, the dream signal chain will make the audio easier to tame, but sometimes even the best can’t fix your problems. On the opposite end of the spectrum, that MXL mic run through your red budget interface is going to pose its own problems for even your best performer. Either way, sometimes you need to bring in a ringer, and Soothe2 is just the man for the job.

That’s a rather convoluted question. Coined by Oeksound as a “dynamic resonance suppressor,” it seems to be part EQ, part dynamics processor, and part spectral shaper. The goal of Soothe2, however, is simple: to quickly and easily take the problematic frequencies out of your audio while minimally affecting the rest. Taming these problem areas is no simple task; many times, EQ and compression aren’t enough. Alternatively, the current lineup of advanced tools employs an airplane cockpit worth of dials and controls, leaving you mentally exhausted digging through the operation manual and tutorials. For the record, Soothe keeps the primary controls in the single digits.

Repeat After Me, “This is not an EQ.”

Although the interface looks like it, Soothe is not an EQ. Rather, it has commissioned “EQ-like” controls to impact the problem audio. Soothe 2 comes with six bands, or “nodes,” as they call them (high pass, low pass, and four parametric bands). When you select each node, controls at the bottom appear for the different types. The filters have specific slopes, and the four remaining nodes have six additional types from standard, shelving, notch, to tilt bands. The frequency and q do the same things that EQs do, but this is where the similarities stop.

To understand Soothe, you have to take the concept of EQ and flip it on its head. Turning up a band on EQ will boost the frequency,  but with Soothe, it does something slightly different.  Turning up the “sens” control increases the resonant suppression and, therefore, decreases the harsh stuff for that specific band. Basically, when you see the band on the graph turned up, it’s handling more of the problem areas. While the knobs at the bottom are great, you can just as easily grab a node and adjust that way. You can even tweak the q by Command (control for Windows) clicking the band, and pulling up or down on the node. You’ll see exactly what Soothe is removing in the spectrograph. The gray notches in the blue show what’s being taken out.

Repeat After Me Again, “This is not a Compressor.” 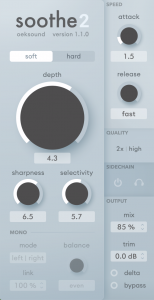 Yes, the interface has “compressor-like” controls but is not quite a compressor. The above-mentioned nodes work in tandem with the five knobs in the depth and speed section to control just how Soothe will handle your problem frequencies. The depth knob serves as the main control for how much overall processing should be applied to all boosted nodes. Just above the depth knob are two choices for different modes of processing. These two modes determine how the depth control will affect the audio, with each name being pretty self-explanatory.

Sharpness and selectivity expand on the depth control and help dial in the perfect amount of suppression. A higher sharpness will make for narrower notches, and a lower will work for more broadband control. Selectivity makes Soothe more choosy, and a higher value only suppresses the most resonant of frequencies. Finally, the attack and release work similar to a compressor with the attack controlling how long it takes for the suppression to reach its max value, and the release for how long for Soothe to return back to nominal.

Soothe has additionally packed a few more tools to further assist with both understanding exactly what the plugin is doing to your audio as well as cater to more particular situations. Soothe comes with the usual side-chain, blend control, mid-side operation, and trim; but it’s the delta and quality control that break the mold.

The quality control is a Godsend for your CPU meter, with a separate mode for online and offline operation. If your session is taxing your CPU, you can set your realtime oversampling and resolution lower, while leaving the offline to higher settings. That way, when you go to bounce the track, you’ll get the most precise processing while still saving a few overloads during playback.

If you’re still scratching your head on what exactly Soothe is doing, the delta control will shed a little light. When engaged, the delta will let you hear what it is removing from your audio. This is where the “aha” moment of “this is not an EQ or a compressor” makes the picture clearer. Things will sound fairly washy but you’ll get a clear picture of what Soothe is taking out of the equation. Using the delta while adjusting settings also helps to tweak reduction to taste and in some cases, can even work as an effect in itself. Try it, it does sound cool pushed really hard.

Using Soothe 2 is like having cheat codes. What used to take a chain of plugins and hours of listening to looped parts of audio is fixed within minutes and very few mouse clicks. In most cases, the default preset will get you 80% there. If the default preset is not enough, Soothe has an impressive library of tailored presets by engineers like Jaquire King, Greg Wells, and Dave Pensado. The one trick to learn early on is balance. Sometimes using soft mode aggressively will do the trick and with others hard mode used sparingly gets the job done. Like anything in life, practice makes perfect.

The only small complaint I had involved the preset menu. I wish once you selected a preset, the menu would close; but I suppose that was carefully thought out to cycle between presets. After all, the majority of the time, the presets need very little tweaking.

Soothe is certainly the real deal. There is a great deal of sorcery going on under the hood of a plugin that at its core is very easy to operate. This plugin will easily become the Franks Red Hot” of plugins – you’ll want to put the s*** on everything! Whether it’s de-essing or a shrill overhead track on drums, Soothe has you handled.

For more information, and to purchase, visit https://oeksound.com/plugins/soothe2/

Soothe 2 Rundown:
5 / 5 Reviewer
BUY
Pros
- Very easy-to-use interface
- Extremely powerful tool for removing problem frequencies
- Very transparent
Cons
- None
Summary
No one wants to spend hours fixing a harsh track. Soothe 2 borrows controls from compression and EQ and takes every bit of guesswork out of taming unruly frequencies. Give it your worst - Soothe can handle it.
Rating
Affiliate