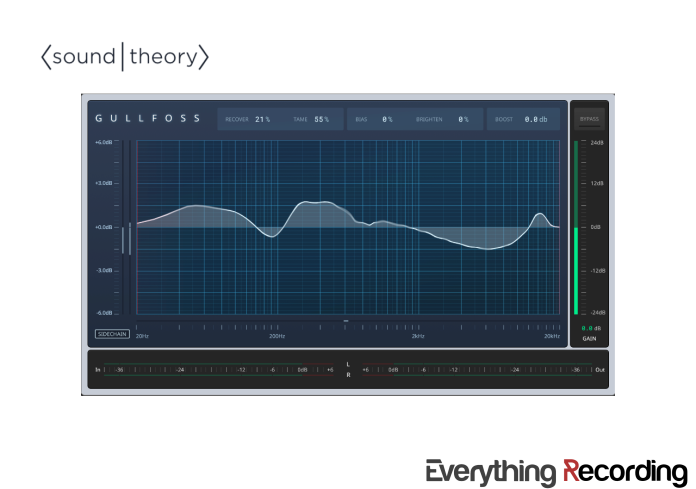 Hey everyone, Bryan here. I’d like to introduce Everything Recording’s newest writer, Dave Willis. Not only is he a great writer, but he also is the executive producer of Tabitha Rasa, a project featuring the best unknown female vocalists from around the world. From time to time, Dave will pop in, featuring reviews, exclusive articles, and whatever he sees fit to post. Enjoy!

Equalizers! There are so many kinds — parametric, passive, graphic, and even dynamic. Well, now there is one that claims to be intelligent. I’m all for boosting the level of intelligence on my side of the mixing desk, so I decided to give this new plugin from Soundtheory a spin. Say hello to Gullfoss.

The Latest In a Long Line of “SoundGoodIzers” 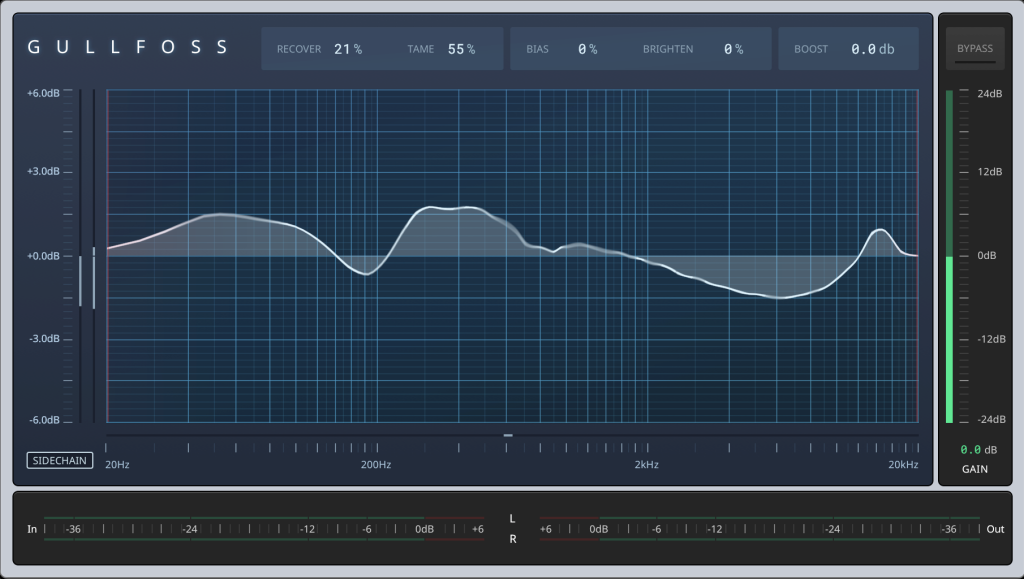 Gullfoss is a plugin “to improve the clarity, detail, spatiality, and balance” of your sound. Bold claims! As humans strive for the perfect sound recording and reproduction, from the beginning of wax recordings to the latest digital, there have always been the class of “soundgoodizer,” those plugins and devices come along and claim to improve the recorded sound.  As digital perfection reached its current apex, everyone is now going to great lengths to go backward in technology and recreate the analog sound of 50-60 years ago… by using digital plugins. And by buying actual analog gear to run their digital signal through. We’ve seen many traditional DSP methods used to improve our mixes, but Gullfoss brings us something brand new.

Rather than an old Aural Exciter or BBE Sonic Maximizer approach of frequency-dependent phase shifting and harmonic synthesis, Gullfoss listens to your signal 300 times per second and adjusts the EQ in real-time. This is a much more responsive approach than a dynamic EQ or multiband compressor since it’s changing what it’s affecting all the time.

They Did the Research So You Don’t Have To

OK, interesting. But for me the big question is: what is it changing it to? My mix is unique and I don’t want someone else’s taste forced on my sound. Soundtheory spent 14 years researching to gain deep insights into “how the human brain processes sound,” and to create a program that would “analyze sound the same way a human would perceive it.” That sound like it’s going to be awesome or utter marketing nonsense geared towards noobs looking for one plugin to replace years of work.

But hey — I make music for humans! Let’s try it out.

Installation was easy and painless, and requires an iLok. One small thing was that the installation on a Mac didn’t ask what to install. That means AAX was installed even though I do not use ProTools. Not a big deal, but it’s nice to be able to decline things I won’t use.

Because it’s new and not obvious as to what it does, I broke with longstanding tradition and actually read the manual! (Please don’t judge me!) It’s readable, short, and clear and explains how it’s different.

Using Gullfoss — Do You Need Recovery or Taming?

I put it on my master buss to see if it thinks my mix is fit for human ears. The one and only window looks like any other EQ, but that’s where the resemblance ends. There are two main controls: Recover and Tame. Gullfoss is designed to reveal masked signal elements, and it can do so by either recovering elements that are masked or dominated by other elements, or by taming components of the signal that are too dominant. I like that they chose active verbs to describe this process, since producers/musicians think in terms like that. Because we care 🙂

Recover and Tame are adjustable from 0 to 200%. It’s very easy to hear the difference it makes, even though it’s sometimes extremely subtle. Higher percentages = stronger effect. It’s designed so that if you push Recover up and it boosts certain frequencies, it also cuts other frequencies so that the perceived loudness remains the same. Ooh, I  like that. One necessary skill in mixing is being able to A/B changes you’re making, and this makes it super easy to do since neither A nor B will sound louder.

When I put a control at < 50%, Gullfoss was only making adjustments of 3 db or less. When pushed further, it adjusted up to 6db. Adjustments are heard instantly without lag. And in Logic, there was no noticeable CPU hit on my 2017 iMac Pro.

I liked what I heard. There were no phase issues, no added harmonics, and even at extreme settings, there was no harshness or brittle high end. (It’s fun trying to make a plugin sound bad!)

Since Recover and Tame operate on different frequencies, you can use them both at once. (Hello, Pultec!) In fact, I found myself using a combo of the two for most purposes.

Now I tried the secondary controls, Bias and Brighten.  Bias tells Gullfoss which one of the two main controls, Recover or Tame, to work on more frequencies than the other. It goes from -100% to +100% with the positive numbers giving Recover more power, and negative values giving Tame more oomph between the two. (Recover and Tame still control how much of those frequencies they affect.) Brighten controls the perceived brightness by telling Recover and Tame whether to prefer higher or lower frequencies. While messing with this control, I was impressed how the perceived loudness never changed, even though the tone did.

Lastly, there is the Boost control. It is independent of all the other controls and goes from -50 db to +50 db. Positive values will emphasize the bass frequencies of a signal while reducing the mid frequencies, and negative values the opposite. I never found this control useful although I imagine it could come in handy if doing a quick and dirty mix so you didn’t have to dig out other plugins.

All the controls are intuitive and easy to adjust, and encourage twiddling.

Before getting this plugin, I watched one reviewer complain that he liked it, but didn’t want it affecting certain frequencies. He didn’t read the manual, which explains the handy ability to high pass or low pass what Gullfoss processes from within the plugin. This is super handy and something mixers will want control over. (Did I mention I read the manual?

Gullfoss includes two other versions: Live for using it in live situations with low latency, and Master, which is optimized for the “highest possible quality and even lower noise floor.” It has a higher CPU hit, finer control, and a more precise listening model. For reference, my recorded samples use the standard version.

My Learned Opinion Which I Learned While Using Gullfoss

So, did my mix sound more pleasing to the human ear? Yes, to mine. You can judge for yourself in the samples below.

I found I had plenty of control over the effect with the four main controls. It definitely added clarity, opened it up, and made the bass less muddy. Could I have achieved that without Gullfoss? Yes, but it would’ve taken a lot more time. And more importantly — I’d have to be aware of those issues to be able to make the changes in the first place.  Which brings me to another use of Gullfoss that I found very valuable: insight. By seeing what Gullfoss does to a track, it can alert you to an issue with the mix you might not have been aware of. I always send my mixes to a friend to check, but sometimes friends aren’t available at 3:00 a.m., those selfish bastards!

I personally do not have a ton of gear, but I try to get high quality with what I’ve got. On the theory of “he who buys cheap buys twice,” I’ve got a few Universal Audio devices to run their high-quality plugins with, and also sprung for Altiverb, an expensive convolution reverb plugin that emulates everything from a Yamaha SPX 90 to a Pharaoh’s tomb inside a pyramid. (Seriously.) So my perspective is to go for the highest quality I can on my budget, and buy fewer and better tools. I look at plugins from the point of view of:

Does Gullfoss Earn a Place in My Plugin Arsenal?

I am a decent mixer, but half the time I send my material out to a third party mixer when I feel my skills aren’t up to the task. With Gullfoss, I can save money on those third party mixers who get at least $300 if they’re any good.

I found I liked the algorithm it’s using to sense what human ears like, and this would have earned it a place in my arsenal for analysis purposes alone. As for utilizing it for its EQ adjusting powers, I’d like to think that my skills will someday allow me to make the perfect mix without it, but for the foreseeable future it’s just too fast and too good for me to pass up. That being said, I found the best results were when I had the Recover and/or Tame controls at 40% or less. Others may disagree, but I think if you need to adjust more than that, then you’ve got bigger problems in your mix!

BTW, Gullfoss is the name of a famous waterfall in Iceland, and since everyone loves the sound of a waterfall, they bestowed the name upon their plugin. A bold move, indeed, but the name certainly fits. 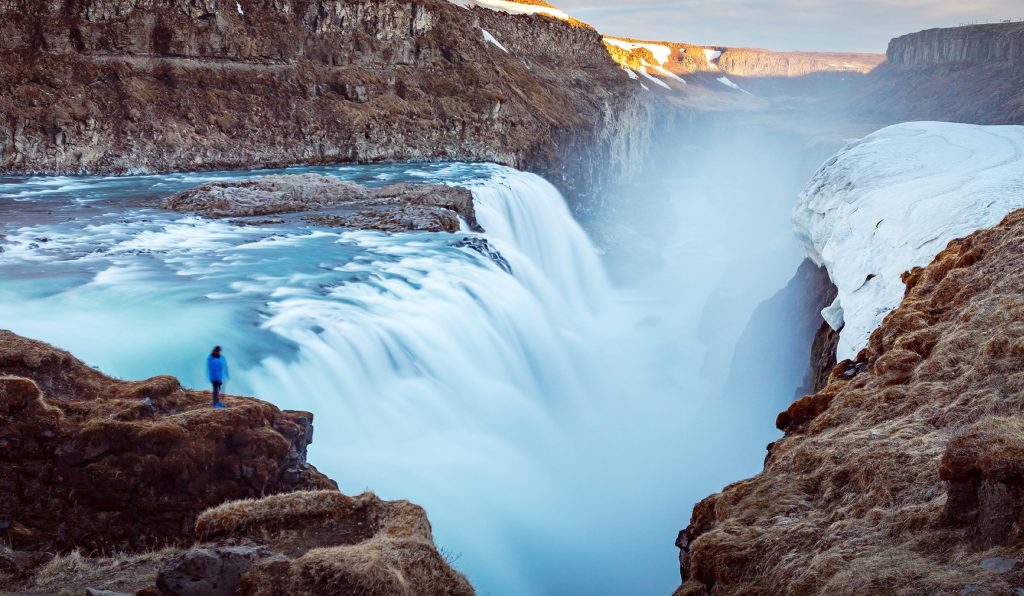