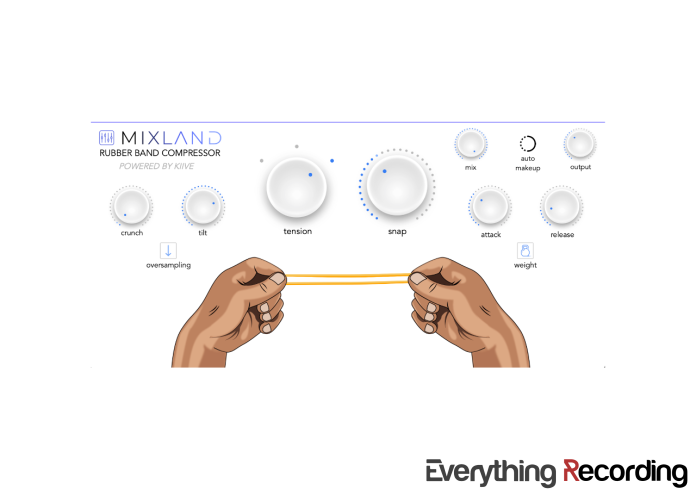 For as long as I can remember, I’ve had one constant in my mixing workflow – the Waves RVox goes at the end of virtually all of my vocal tracks. Then comes along the Rubber Band Compressor by MIXLAND.

New Kid on the Block

It is a veritable crapshoot when a new plugin press release shows up on my desk, especially the debut plugin from a company. Some inspire while others slowly drain the desire to type out a review (i.e., oh great, what’s this? another Neve EQ clone that you’ve perfectly matched the RAF Blue Paint scheme as the original in Trent Reznor’s collection? (*screams into some Auralex). Fortunately, MIXLAND falls in the “inspire” category and isn’t another Neve clone (seriously, everyone, stop with the Neve stuff. You’ll never beat KIT’s Neve clone).

First impressions are essential. Although founder Jesse Ray Ernster may be new to the plugin scene, he isn’t new in the world of music. Working with everyone from Doja Cat to Kanye West, Jesse has figured out what works and what doesn’t for his process. In that discovery, he’s taken what he likes about dynamics and combined them into his first plugin, Rubber Band. It also doesn’t hurt that he’s got a sense of humor when it comes to hype. Not taking yourself too seriously will get you much further than trying to cultivate a “Steve Vai” mystique.

Before I even clicked install, the Rubber Band Compressor had my attention. So many times in writing, you’re reaching for a metaphor to describe a compressor, and MIXLAND drops it right in your lap. VCA compressors are snappy and quick, much like a rubber band, so the comparison works. MIXLAND takes the concept a step further by adding graphic representation right in the GUI.

So, a little background on Rubber Band. It is a VCA-based compressor that features “exponential, dual-stage resistance.” The concept creator Jesse Ray Ernster was going for mimicking what audio would sound like if pushed through a rubber band (without the “boiiinng” sound you get, of course, although that might be a unique sound for a reverb). The result is an interesting and easy-to-use plugin. A lot of the heavy lifting is done behind the scenes, leaving you the energy to use your ears instead of tweaking many knobs.

Snap into a Slim Jim

The interface is spotless and straightforward. At the center of the UI, you have the main controls for Rubber Band: tension and snap. Although there is much more going on behind the knobs, you can think of tension as your ratio control and snap as your input drive. Like most other compressors, you have attack, release, mix, and output.

Additional tricks abound in the form of three separate controls: crunch, tilt, and weight. The crunch control pushes some modeled Class-A saturation into the input stage, adding a little or a lot of dirt into the track. On top of saturating your signal with crunch, a tube-modeled tilt EQ injects either a sparkly top end or a rich low-end foundation to the signal. Both work pre-compressed and provide dual-purpose: enhancing the sound and hyping the detector stage to whatever harmonics and frequencies are added by each. Lastly, weight places a high pass filter into the detector circuit to let the lows slide on through, giving back more “oomph” to the compressed signal.

Rounding out the interface, you also have a mix knob, auto makeup, and oversampling. The oversampling feature helps to remove aliasing and is especially useful when giving audio the business with heavy compression. Fewer artifacts are always better but do cost in the form of DSP.

“Bands a Make Her Dance”

Finally, I have a relevant excuse to use this song as a heading – thanks, MIXLAND. Rubber Band Compressor makes your audio move. It can bring an incredible ambience to drum tracks when a fast release and crunch are used. You almost don’t need a short reverb. Reach for the mix knob and blend the compression to taste or place Rubber Band Compressor on a bus and set the attack to the fastest setting. Instant ambience. This plugin also does the “pop vocal” sound masterfully. Consonants stand out, and you get that incredible clamp for the rest of the syllable. Stir in a bit of tilt eq to bring in the air, and your vocal track is mixed.

Following the sage advice of the aforementioned lover of this plugin Michael Scott, I will offer my constructive compliments. I don’t have many, and most come strictly out of curiosity. I want to be able to move the crunch and tilt after compression. In some cases, a little spice after compression can be just what the doctor ordered. I’d also like a little more control over the detector circuit, like pushing the fundamental frequency of, say, the human voice more into compression. I’d also mention the lack of presets, but I’ve been told that those will be coming in the next update so that one is solved. Overall, no deal breakers at all.

All too often, we spend countless hours and plugin slots trying to “set” a vocal into the mix. Rubber Band does it in a few mouse clicks. After using Rubber Band on several mixes, I found myself replacing Waves Rvox completely. We all know there is some magic going on with that plugin, but Rubber Band Compressor does it differently and better. Say hello to your new “finishing” compressor.