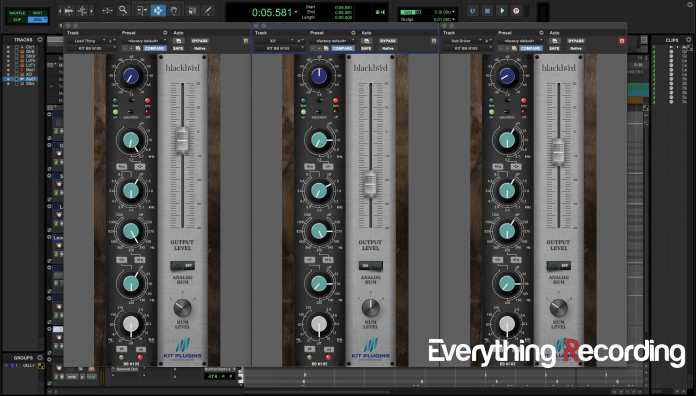 The Neve 80 Series are some of the most sought-after consoles in existence. While the differences between each model in the series vary, the sentiment remains: There is some form of voodoo between the input and output jacks that transforms audio. For some unexplainable reason, even simply being in the same room as these monoliths creates certain electricity in the air. This could, in part, be due to the parade of music that has passed through the console or documentaries worshiping its mere existence.

Either way, there is something magical about recording through a large format console. I, too, fell under the spell of NRG Recording’s 8068, which led to researching gear and led to me creating Everything Recording.

Needless to say, Neve holds a special place in Everything Recording’s history. So when KIT Plugins and Blackbird Studio contacted us about a review of the new BB N105 channel strip, we jumped at the opportunity.

The Neve 31105 EQ module is often overlooked in the plugin world. Most manufacturers go for the standard 3 band 1073 / 1084 variant, most likely due to the familiarity. If my recollection serves me correctly, the only plugin similar to the BB N105 is UAD’s 31102 / 31102 SE plugin; but that still only has three bands of EQ. For those who wanted the extra band of EQ, there were virtually no plugin options. That is, until now.

I’m sure during a Google binge search of gear you only dream of owning, you’ve stumbled upon Blackbird Studio’s website. At the heart of Blackbird Studio A is a Neve 8078. While there are still several 8078 consoles still kicking around, this one is unique. Blackbird Studio owner John McBride took this exemplary specimen and carefully restored it while adding unique modifications to bring it into the modern world.

Ever the humanitarians, John McBride and KIT plugins wanted to share the magic of this console with the world. Hence, they painstakingly researched the board’s schematics and sampled a channel of the 8078 all the way through “master bus b” using John’s favorite A/D converters. This process left no stone unturned. The team went microscopic with sampling and research, breaking down every nuance that gives this console its unmistakable sound and dimension.

The plugin comes in VST3, AU, and AAX versions.

Going off of pure assumption, the “BB” probably stands for Blackbird, “N” for Neve, and “105” most likely alludes to the 31105 EQ strip the console incorporates. While it may look like a standard console plugin, there is more than meets the eye.

A quick overview of the plugin reveals a preamp/line section, saturation, four EQ bands, Hi / Lo-pass filters, and output section. You’re even given the option of adding some good ole’ fashion analog hum with three different volume levels to choose from. Sidebar: isn’t it crazy that what engineers wished was removed from the console finally is, but now it’s realized that these nuances attribute so much to vibe in modern in-the-box production?

Starting at the top section of the GUI, you will see two switches just under the dark blue knob. The switch just under that knob selects between Line or Mic mode. By default, the Line section is selected. This would be just like running through the console’s line amps. If you really want to have some fun, switch over to the “Mic” setting. This engages the preamp section and your two new best friends: the Preamp Sensitivity control (the dark blue knob) and the Saturation switch.

Don’t think of the Sensitivity control as run-of-the-mill gain control. Twisting this knob to the right not only increases volume in 5 dB increments, but it also invites some compression and harmonics to the party – and boy does it. Audio loosens its tie and opens up a little. Flip the Saturation switch to the left and crank the Sensitivity, and the lampshade goes on the head. You’ll hear subtle open dimension in lower quantities, and as you increase, the audio gets some teeth. Although you’ll love the preamp section with the saturation, make sure you’re level matching with that fader on the right.

Feel free to argue with me in the comments if I’m wrong (spoiler, we don’t have comments), but a three-band EQ sometimes is not enough for modern mixing. Lucky for you, the 31105 EQ module has you covered. I will say, this particular EQ on the 8078 consoles is very flexible. Each of the four band controls has stepped frequencies you can choose. The low and high bands have five frequencies to choose from, while the High-Mid and Low-Mid have ten. Needless to say, options abound. If you can’t work with that many choices, odds are you’re mixing wrong.

The first teal knob is your High Frequency. You have stepped increments of 3.3kHz, 4.7kHz, 6.8kHz, 10kHz, and 15kHz with ±15dB boosts or cuts using the center gain control. This band additionally gives the option between a peak or shelf control.

The Low control works similarly to the High band with the selection between a shelf or peak with the mode controller. The low band has selectable frequencies of 33Hz, 56Hz, 100Hz, 180Hz, and 330Hz.

Finishing out BB N105’s controls is a Phase button (the “ph” button at the bottom), and an EQ enable/disable button (eq button at the bottom) as well. On the right side, you have an output gain fader that you’ll definitely be reaching for when using the preamp/saturation section of the plugin. Lastly, you can enable the Analog hum switch and select from three levels of hum.

Let’s Put it to Use

We have used too many Neve-based plugins, and they all sound fairly similar. I can say with confidence that the BB N105 is a whole new monster. Just placing the plugin on an insert causes audio to jump to attention. I particularly like using your typical catchwords, but the plugin adds dimension. Your fader moves in your DAW not only feel like they’re raising or lowering the level, but with BB N105, the track feels like it’s moving backward and forward in the spectrum.

While the line switch does its thing well, the preamp section is where it’s at. At a bare minimum, I add just a pinch of sensitivity to the track. The same goes for EQ – a small move goes a long way. Of course, there’s always the nuclear option, and BB N105 can do that with its hands tied behind its back. Even at moderate amounts (with the fader in play for dialing back the level jumps), you feel in control. The plugin always sounds musical.

Every Rose has its Thorn

Sonically, there are absolutely no issues with BB N105. Functionally, there are a couple of things I’d like to see addressed. I would like to see a rough gain compensation linkage. The Sensitivity knob is, well, sensitive, and you’ll quickly be grabbing for the fader. It gets loud quickly, and a linked knob would be a godsend. Lastly, I’d like an easier way to hear a gain-matched difference between adjusted preamp settings and line amp selection.

Let’s Cut to the Chase

Simply put, if you own one “Neve-based” plugin, make it the BB N105. With multiple plugins released every other day, most can be compared to others, but this plugin, like the actual Neve 8078, does something others just can’t.