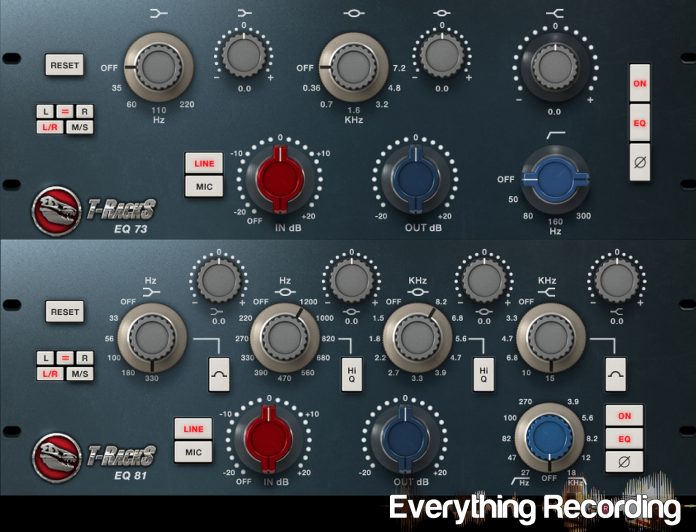 The old military spec paint, the iconic combination of red and blue Marconi knobs with grey fluted concentric knobs – even people who aren’t in the business of recording can recognize the design. There is no doubt that these colors represent one of the biggest names in recording and thanks to Dave Grohl and his incredible movie, he has driven the price of the hardware sky high. Yes, we all know the movie was great and his intentions were pure, but now this British staple in the pro audio world is even more out of most people’s price range than ever. On the other hand, the popularity has caused plugin developers to take a long hard look at the gear and design emulations. This brings us to IK Multimedia’s T-Racks EQ73 and 81.

These channel strips IK Multimedia have painstakingly modeled began as big consoles during the golden age of recording, when you needed a versatile preamp and EQ section spread out over many channels to accommodate live sessions. Due to wear and tear over the years combined with multi-track recording, where instruments are tracked one at a time, these channel strips have been chopped from their large format consoles and sold individually or in sidecars (lower track count versions of the original made for tracking drums or summing mixes through). The 1073 and 1081 are two of the most searched items online for analog enthusiasts the world over, many of them building their own interpretations of these channel strips. IK Multimedia has increased their lineup of Custom Shop plugins with their versions of these two historic pieces of gear.

As part of the T-Racks Custom shop, these plugins are easy to install and come in all of the popular formats including AAX-32 and 64. Each plugin offers both mono and stereo operation with both standard and Mid-Side versions to take your classic rendition of this channel strip to new areas. This allows for you to add the analog sound and make room for centered tracks. It’s the best of both worlds with IK Multimedia. I will say so far from my experience to go easy on throwing these things all over your session because they will eat up resources fast. I’ve put 8 of them on a blank session in Pro Tools 11 and quickly started getting the high sign from Avid that I’ve run out of native processing power, even on my i7 Retina Macbook with 16gigs of RAM. Another issue I’ve come across is the graphics. It seems on most Retina screens that the plugin is just a little fuzzy and takes a little getting used to.

Seeing as these are recreations of the original, the controls are fairly straightforward. I did find myself trying to adjust the gain of each band using what I thought was the inside concentric knob on the frequency section. I don’t understand why the developers decided to place some parts of the controls concentric, while not making the gain controls for each band the same. It takes a little getting used to if you’re used to using the Universal Audio counterpart, but it doesn’t affect workflow too much. I just wish IK Multimedia would have made the layout more uniform in design. So other than the DSP issue and some nit picky design opinions on my part, lets get on to the individual plugins.

The EQ73:
The 1073 was the first iteration of the channel strips built into the A88 console in Wessex Studios. This console came about due to a change in the way the recording industry ran. In the beginning, the record companies would control every aspect of the recording down to the engineering of equipment. This has developed some great gear such as the hardware that shaped the sound of the Beatles, but as the record companies placed a tighter grip, the engineers soon started independent studios and needed gear. This is where Rupert Neve came in, designing what we know of as the 1073 channel strip.

In a day in age where you see EQs with countless banks of surgical bands, it’s nice to see a company getting back to what made music great. The EQ73 holds true to the traditional layout, giving you 3 bands of EQ, with the stepped low cut filter. IK has even gone as far as to emulate the gain staging of the input and output controls, giving you the ability to choose between the input or mic circuit, allowing you to push each individually for a more classic analog sound. You even get the same burning type break-over the original would give when pushed beyond its limits. This makes throwing a little dirt into the kick and snare on a set of drums easier than ever. It seems the mic option saturates the signal a little more, giving it a more loose sound and the input being faster with transient content. The EQ73 is definitely the minimalist sweetener that gives tracks the character they deserve. Drums seem to eat the gain staging up, enjoying being pushed just a little beyond its boundaries while acoustic guitars saturate to just the right amount. The bands of the EQ are very forgiving and not overbearing in the least, making most changes in frequency content broad and coherent to the rest of the content. Along the same lines, you will not be using this EQ to necessarily carve frequencies out of a mix. Just like all other versions of this piece of hardware, it is more used for character to add all of those catchwords everyone uses for analog pieces of gear. I found myself using a parametric EQ before this plugin to clean up some of the rough edges and using the EQ73 as a broad brush to reiterate the good parts, and it does that in spades. But what if you wanted to have your cake and eat it too with the EQ73? Well you’re in luck because IK Multimedia has also modeled the EQ81, the bigger brother to the EQ73.

The EQ81
The 1081 came about when engineers wanted more options to the already great 1073. This led to more EQ bands as well as filters, giving you everything the ole ’73 had but subscribing to the adage that more is… well… more. IK Multimedia have taken that approach one step further with the EQ81. This EQ is a little more involved and perfect for applications where you need a little tighter interaction with your signal. It features the same input and output section, low cut filters, but adds a concentric knob around the low cut to incorporate a high cut filter as well. You have also been upgraded with 4 bands of EQ that are stepped and selectable, taking your high EQ section from the 73’s 10K band to 15K. The mod bands also feature a button to narrow out your EQ bands for those times where you need to just cut or boost a smaller section of the band. The outer bands feature either the shelving or peaking, giving you even more tone sculpting powers. This EQ is perfect for drums and guitar signals where you need the tone of the EQ, but also want to get in there and pull some select frequencies out. I found myself using it a lot on acoustic guitars and bass, pulling out those annoying resonances but opening up the bands that count.

So overall I like them. They do exactly what you would expect out of an EQ that emulates an analog classic. The EQ81 even allows you to get slightly surgical in your mixing by narrowing the bands and cutting what you need. It’s good sometimes to get back to the basics and mix with a plugin that doesn’t give you a graphic interpretation, forcing your ears to do the deciding. Pushing the drive on the input is a nice added feature that is fairly unique to these units. I know the Scheps73 does it as well but this is a more scaled down, utilitarian version. I just wish I could put it across more tracks without my session running out of resources. I know modeling takes a toll on DSP, but when AAX coding is supposed to free up the pipelines, this particular plugin needs to run just a little more efficiently. I’ve had the pleasure of actually working on a few Neve consoles and channel strips and I can say these behave very similar to the ones I’ve used. I’ll definitely be putting these two on as many tracks as I can possibly manage in my sessions and welcome the added vibe these plugins place on tracks. I have no doubt that anyone that buys these plugins will be reaching for them once they place them on just about any given track for the first time. Out of all of the Neve type plugins, I like the EQ73 and 81 the best.
For more info visit http://www.ikmultimedia.com/products/treq81/ & http://www.ikmultimedia.com/products/treq73/