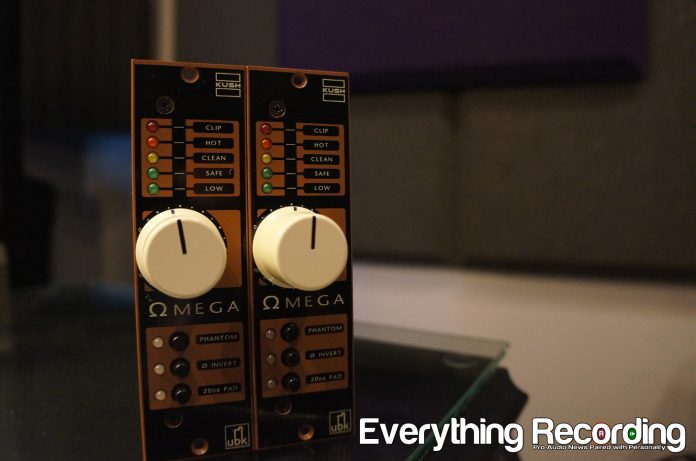 What if you could have the power to decide what type of preamp you want to track with long after you’ve recorded the audio? Who wouldn’t want to be able to choose between, a transformerless preamp, a Neve, or API weeks after the guitar player left? This has long been the dream of engineers who have “recorders remorse” after using the flavor of the month pre and weeks later regretting it all together. Those days can now be behind you.

Kush has returned with a new piece of hardware and accompanying software that essentially creates a multiverse of analog / digital goodness. Omega is a 500 series preamp that can work in conjunction with Kush Audio Transformer plugins to give the character and tone of a couple of staples in the vintage gear world (with more “Transformers” coming down the pipeline). On the surface it would appear this is a symbiotic duo, but even though each have been designed to work in tandem, they can also function completely independent of each other. Let’s peel back the layers of Omega together shall we?

Let’s start with the preamp. Omega has been bathed in all of the lush brown 70’s glory that makes Kush Audio hardware stand out from the crowd. This 500 series module contains very clearly labeled metering, one big knob, and a few buttons – no extraneous controls. Below the volume knob is a Phantom Power, Phase Button, and a 20dB Pad. One thing I did miss was a high pass filter. Although software can do this, there’s something about a fine tuned resonant “butterworth” filter that can both cook and clean the signal at the same time, but maybe that’s a subtle hint from UBK that this preamp would go good together with an Electra. One thing that stands out is how the metering section coaches the user as to the impact of the source audio on the preamp with clearly labeled “Low, Safe, Clean, Hot, and Clip”.

Omega is transformerless in order to grab as much unaffected sonic information as possible. Apart from giving a somewhat neutral, open sound, this supplies the “Transformer Plugins” a larger, clearer swath of data to work with to complete their intended task (which we will get into later). The transistor amp inside of Omega is the very same one featured in Gregory Scott’s highly modified VCA built into Tweaker. There is no DSP built into the preamp and the Omega doesn’t act as a dongle for the Transformer plugins. Omega is simply all analog.
This preamp has quite a bit of headroom too (around 75 to 80dB which is a TON) and can be pushed pretty hard without blowing out your signal. Judging by its creator, it is suspected that this pre was built to be very “Ribbon Mic Friendly” and is designed to handle transients very well with a somewhat neutral, open tone. Omega can actually be used on its own without any plugins to achieve was Kush Audio has considered optimal signal path. This preamp has been tuned out of the box to sit easily in a mix on its own but how does a neutral preamp have the ability to sound like a Neve? This is where the Transformer Plugins come in to play.

These plugins are available in AU, VST, and AAX and are built with certain preamps in mind. The idea behind designing plugins that interact with hardware is to track with a moderate amount of gain on Omega, and without clipping your converters, send this signal to your DAW and ultimately into a track with a Transformer plugin instantiated. At this point, the Transformer plugin takes the data optimized by Omega, and because the software was built with the design of the Omega preamp circuit in mind, degrades the signal and removes precise information similar to how analog gear signal path translates sound in the form of electricity. By removing key snippets of data using Kush Audio’s “Transient Harmonic Coupling” or “THC” (get it?), different transformers from different pieces of gear can be “modeled”. Once modeled, the affect of the “degradation” of the signal can be controlled and virtually “pushed” into saturation.

The plugin interface is very simple, the knob in the center controls the intensity of the “transformer” effect, the “phase” button will flip the polarity, and the -20dB button is a pad that will attenuate the input signal, and an output slider to trim the signal path on the way out. Any time a moderate amount of “saturation” is occurring within the plugin, the two green LEDs will illuminate and work as a visual guide. This doesn’t mean that the plugin isn’t in play when the lights aren’t flashing. Even with the intensity all the way down, Transformer is influencing the signal. When either the phase or the -20db button is engaged, the LED next to the control will illuminate green. The -20db button can be a bit misleading at first as this button doesn’t pad the output signal but almost works as a “sidechain” control for the intensity, thus allowing you to dial in just the right amount of flavor with gain compensation on the other side to volume match the signal. One issue I do have with the plugins is the amount of volume boost simply instantiating the plugin. This usually entails immediately pulling back the output slider to volume match the source audio with the affected. Just default the plugin to dial back the Output slider -3dB to account for the gain if volume becomes an issue.

At the time of the release of this review there are two Transformer Plugins: Model A and Model N but more are expected to come in the future. These plugins do not have to work in tandem with the Omega preamp either. Just about any source audio can benefit from the Transformer’s vibe, even on classic analog gear; but keep in mind –  to experience the full power of the models, the Omega preamp is needed to represent the true emulation of the target gear being modeled. The difference between the plugin being used with a preamp other than Omega is a whole other experience.

Omega Model A is based off of the sound of a Vintage API and is designed to bring source audio front and center with its clarity and punch. Omega Model N is all Neve. This model is designed with the lush, warm, heavy tone in mind that stays right where it needs to in a mix. Each Transformer Model gives very apparent results and neither sounds close to the other. Some emulations of these two pieces of gear from other companies sound pretty similar, not these two.

The concept and technical jargon is impressive no doubt, but words and ideas are just that. Omega backs up its bark with gusto. This is combo is the real deal. I tested Omega with the Model N Transformer up against my own Neve 1272 racked preamp and Omega was every bit of Neve as the original. I had to dial in the intensities just right to match exactly what I was hearing with the 1272, but as I was attempting this, I noticed myself leaning more towards the Omega’s tone. The intensity knob not only gives an option to sound like the Neve, it also can expand the vibe into a more enhanced Neve. Nuances can be fine tuned with the Transformer as opposed to just having a volume knob. Although I did not have an API preamp, I have worked with API quite a bit and Omega captures exactly what you want when you reach for an API. Tracks jump right out in front without being in the way. The transients pop and that analog sheen grabs you through the speakers. It’s crazy that this is all being gleaned from a fairly neutral preamp.

Having access to vintage preamps is a huge plus and kudos to Kush Audio for developing this, but honestly, on a lot of tracks, I ended up using the preamp by itself. It somehow is transparent with character at the same time. I put it up against my Millennia and preferred Omega almost every time. The tone hits the spot on almost every track from drums to vocals and everything in between. Don’t get me wrong, when I wanted attitude on a track, I would throw a transformer on, but there is really something special and unique about the preamp on its own. It is not simply a conduit for the plugins to work.

I ran everything through the Omega preamp. Acoustic guitars magically need less cleanup on EQ, electric guitars thrive on the open character, and virtual synths magically grow circuits and vintage vibe. Any studio tracking drums need a pair of these no questions asked, scratch that – anyone who runs their audio through a mix buss needs two of these. Coming in a $549.00, two of these are the equivalent of 6 separate preamps with the Transformer plugins – with more Transformers coming down the pike. The Transformers are only $29.00 a piece so even if you do not buy an Omega 500, these plugins will still add plenty of flavor to your tracks and are a steal.

One of the factors Omega has going for it is that it subtly adds character while allowing your microphones’ voice to come through, thus giving you a broad palette to work with. The Omega preamp is truly a balance of originality and subtlety – The Omega with Transformer plugins is a dead on replica of two great pieces of hardware.

What we are left with here is a “have your cake and eat it too”, a situation rarely accomplished by hardware and plugin manufacturers. There now exists a system that will allow you to track clean and swap preamps during mixing without running out of your DAW. It just took a company that makes both masterfully to put all of the pieces together. Give me a pair of these and a pair of Lauten Edens (Review HERE) and there is no situation I can’t handle. Well I’m now halfway there with a pair of Omegas in my rack. Bring it on world.
For more information visit, http://www.thehouseofkush.com/#!analog/cy7t

HELP: Maschine Will Not Connect To Controller