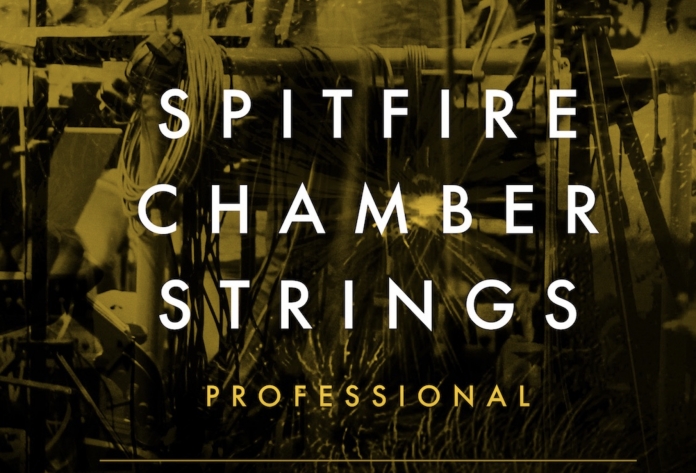 Spitfire Audio is proud to announce availability of SPITFIRE CHAMBER STRINGS PROFESSIONAL — a core patch-strengthening professional edition of the encyclopaedic super deep-sampled set of string articulations and techniques taken from recordings of 16 of the finest strings players playing the finest instruments via the finest signal path at Lyndhurst Hall within London’s legendary AIR Studios, served up with four additional microphone positions and three CPU-friendly stereo mixes by award-winning engineer Jake Jackson as an advanced sample-based virtual instrument for Native Instruments’ industry-standard KONTAKT PLAYER platform (compatible with the NKS® extended plug-in format allowing advanced integration with NI’s KONTROL keyboard controllers) to give a hugely diverse range of signals for all sounds.

For many musicians, the word ‘chamber’ can conjure up mental images of white wigs and harpsichords; however, in modern vernacular it simply describes a group of instruments that is smaller than a symphony orchestra — anything from a quartet to 40-odd players. Placed into the context of strings, it is generally taken to mean a medium-sized ensemble encompassing five sections — 1st violins, 2nd violins, violas, cellos, and basses.
By way of brief background, Spitfire Audio itself was basically built upon a (still-ongoing) chamber strings sampling project close to its collective heart. Why? Well, many musical friends, including A-list composers, complained that sampled strings were unwieldy, ill-defined, and too epic. For much of their musical output — from sensitive and achingly-beautiful quiet passages through to searing lyricism — they did not need huge numbers of players but rather attention to detail — difficult in a developing sampled world where an abundance of symphonic solutions more often than not tryingly tripled and quadrupled when playing lots of notes. Not an ideal scenario by any stretch.
So Spitfire Audio set about lending a helping hand by setting themselves the difficult task of recording a chamber strings range, which was then shared as part of a private project with its closest colleagues. Come show-and-tell time, considerable optimism and encouragement ensued. Even though it still sounded ‘kind of big’ to some, Spitfire Audio doggedly dug deeper into its chamber strings project, posing pertinent questions. Questions like: How small can we go before it no longer sounds like a string section? Turns out that 4, 3, 3, 3, 3 was the magic number — namely, four 1st VIOLINS, three 2nd VIOLINS, three VIOLAS, three CELLOS, and three BASSES, born out of a desire to create the finest chamber strings project to provide that sought-after Widescreen Hollywood sound with a clarity and ability that is harder to articulate with larger-sized string libraries. Small can be beautiful, after all.
By bringing together a uniquely intimate group of extraordinary players, putting them in one of the most extraordinary recording locations — London’s legendary AIR Studios’ Lyndhurst Hall, the stunning sampled results were made available for all to hear, purchase, and play as part of Spitfire Audio’s SABLE chamber strings series (R.I.P.). What was by then a four-year labour of love that had bloomed into a very detailed, difficult to maintain sampling project, 2016 saw SABLE being ‘put out to pasture’ only to be effectively ‘reborn’, rationalised and refreshed as SPITFIRE CHAMBER STRINGS.
Fast-forwarding back to today sees SPITFIRE CHAMBER STRINGS PROFESSIONAL enhancing and providing greater flexibility to the core patches from SPITFIRE CHAMBER STRINGS with four additional microphones available for all techniques (excluding ENSEMBLES), encompassing warm close ribbon (Cr), close stereo pair (St), and gallery (G) signals, as well as outrigger (O) signals on all techniques with the essential CTA (close tree ambient) for added warmth, creating CTAO for the ‘classic Spitfire’ setup. Saying that… that’s not all. Additionally, fine (F), medium (M), and broad (B) stereo mixes by award- winning engineer Jake Jackson are available for all techniques (excluding ENSEMBLES) for instant, great-sounding mixes with low CPU (Central Processing Unit)/RAM (Random-Access Memory) usage. This expansion contains over 150 GB of additional content to help users — professional or otherwise — make more of what was started with SPITFIRE CHAMBER STRINGS.
Saying that, those 16 star players performing in that magical ‘chamber’ configuration, sampled with over 244 articulations, including 38 Short(s), 53 Long(s), 19 FX, and 45 extraordinary Legato patches perfectly programmed by renowned UK composer Andrew Blaney are all present and correct in SPITFIRE CHAMBER STRINGS PROFESSIONAL. All are recorded with multiple round robins, dynamic layers, and now presented with seven versatile microphone positions. In addition to each individual section, Spitfire Audio has again seen fit to include a comprehensive selection of articulations and techniques presented as ENSEMBLES, designed for sketching and composing with ‘out of the box’ satisfaction guaranteed.
As far as Spitfire Audio is collectively concerned, its ever-evolving chamber strings project has always been worthy of attention, as anyone looking to stand out from the compositional crowd will surely testify. Thanks to SPITFIRE CHAMBER STRINGS PROFESSIONAL pushing things further forward, more ears will surely be opened up to that sought-after Widescreen Hollywood sound with a clarity and ability like no other.