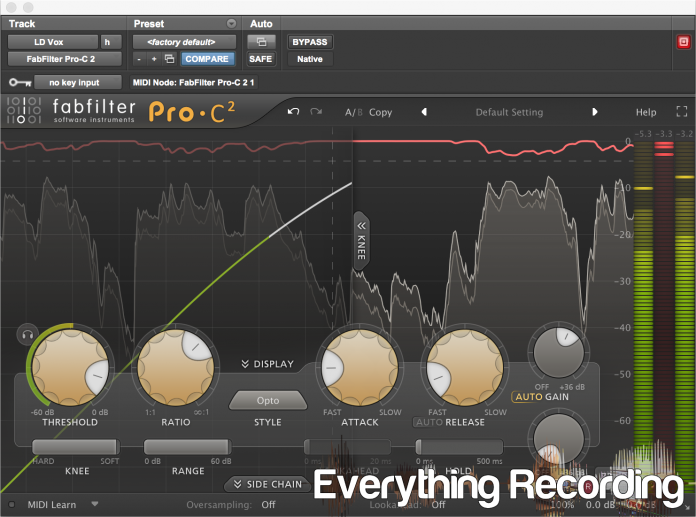 We need no introduction for FabFilter. We all know the pros use it. We even have reviews already published for Pro-MB (here) and Pro-Q 2 (here). We were very eager to get our hands on the second installment of FabFilter’s Pro-C. This dynamics plugin comes in all flavors for all DAWs in both 32-bit and 64-bit. For those unfamiliar with the original plugin, Pro-C1 is not your grandfather’s compressor. On top of doing all of the tasks a standard compressor can accomplish, it features 3 styles of compression, an intelligent graph displaying real time compression, basic side-chain EQ, and an easy to use interface- making it a favorite for beginners and experts alike. So if Pro-C1 is so great, why pony up the money to upgrade to version 2?

First off, you can have your cake and eat it too. FabFilter knows that change isn’t instant and still allows you to use Pro-C1 as well as Pro-C2, even in the same session. Unlike most upgrades that force you to “get with the times”, Pro-C2 is its own install, that will even allow for use of version 1 presets. Just be warned that your Pro-C1 presets may sound a little different due to updates under the hood.

A lot has changed since the original incarnation of Pro-C and Fabfilter has recognized that and given Pro-C2 a facelift. The interface now supports both Retina and High DPI screens, is re-sizeable to small, medium, large, and even has full screen mode. No more squinting at controls and numbers. It’s good to see plugin manufacturers breaking free of the old standards of interface size and allowing for the option to consume more screen real estate. This couldn’t come at a better time for Pro-C2 especially given the massive overhaul of the display sections. Better use of the background of the window as well as adopting FabFilter’s “floating main controls” featured in Pro-MB and Pro-C2, version 2 has become a powerhouse with every single facet of dynamics all at an easy glance in one window. Pro-C1 definitely lacked in this department, making you click between side-chain and level display.

Speaking of the side-chain display, Pro-C2 has expanded on the basic hipass and lowpass of version 1, giving you an additional mid band that can be cut or boosted with either a bell, notch, shelf, bandpass, or tilt shelf. To make matters less complicated, the only time the side-chain is in use is when it is visible. The only issue with this is the screen can get pretty big at times and it would be nice to be able to hide it sometimes. A simple color change of the side-chain button would’ve done the trick.

The knee display has also been updated, giving you the ability to see the source audio travel up the knee with a small green line. The knee can go from a hard knee to a 72 dB soft knee option, which can add more analog flavor and character to the audio on top of compressing. With more space freed up by using digital “feng shui” of the interface, the input, output, and compression meters have a little more room to stretch out and cover more area. If all of this is just too much visual, the knee and level displays can go away with the click of a button, leaving you with a very compact and classic looking compressor. Sometimes it’s nice to take a vacation from all of the info and just turn knobs ‘till it sounds right.

As great as all of the visual upgrades are, FabFilter didn’t stop there. The engine has been tuned and a slew of new features have somehow been packed into the interface without overcrowding. Up to 4X oversampling is now featured on version 2. Oversampling can help combat the false frequencies caused when aggressively compressing audio. This is especially a great help when using very fast attack times and running heavy handed on the compressor, but in exchange, Pro-C2 will need more processing power and will introduce latency.

Across the floating control bar are your standard threshold, ratio, attack, release, and gain makeup. The threshold knob has a nice ring around it to show incoming audio levels in relation to the threshold control. Knowing when the compressor will start gain reduction is as simple as turning the knob to the exact spot where you see your peaks on the ring. If that’s not enough, audition triggering can be used. The little headphones next to the threshold can be clicked and you can hear exactly what is audibly causing gain reduction based on the threshold. It’s the best of both worlds allowing you to use both your ears and eyes to precisely handle audio. What’s slightly different to other compressors is how wet and dry signal is balanced. Instead of featuring a mix knob, dry compression can be added separate to compressed audio to achieve gain change up to 200% and instead of having to add your own gain makeup after compression, an “auto gain” button has been added. Although it’s not exact science, auto gain can get you very close to matching input levels with the compressed output. An auto release works similarly as well to monitor overall compression and release the compressor accordingly. While most of these settings are standard to most plugin compressors, FabFilter added a few more to help tip the scales in their favor. However it is lacking one particular knob which would be extremely useful given the sheer power of the plugin… an input level knob to drive content into the compressor.

Next to the adjustable knee slider is a new “range” slider, which will work to limit the overall maximum gain reduction. The right two sliders features an adjustable “look ahead” slider that can scout transients up to 20ms. This helps to preserve the transparency when catching transients but just like the oversampling, will introduce a little latency. The very last slider is a very intriguing one. A “hold” slider will prolong the peak reduction up to half a second. If used sparingly, hold can help make compression a little less apparent but if used heavy handed, can even give the track a rhythmic pumping. While we’re on the subject of pumping, FabFilter has taken its intuitive midi learn capabilities and has added the ability to trigger the compressor using midi. This takes creative compressing to a whole new level by allowing rhythmic effects to be created by using your own hands. Just imagine taking a boring synth pad and triggering pumping effects by using an electronic set of drums or an MPC pad.

On top of the 3 styles of compression already featured in version 1, Pro-C2 now has 5 more to choose from that cover just about any scenario you can throw at it. There is the original “clean”, “classic”, and “opto” styles that cover a fairly broad uses ranging from utilitarian and clinical, to more analog and vibey. However FabFilter decided that more is better adding Vocal, Punch, Pumping, Bus, and Mastering to the mix. Each setting is fairly explainable in the name giving you the option of a clean, fast mastering compressor, one that will glue tracks in a mix bus, a punchy analog type compressor, another that will aggressively pump for EDM and pop music, and one tailored exclusively to keep vocals right where they need. What is unique about to vocal setting is that all of the hard work of tweaking the right ratio and knee has already been taken care of, leaving you only to have to choose the right threshold. I found the Bus perfect on my drum mix and punch makes an acoustic guitar sing. Adding pumping with the midi triggering was the most fun and I was able to do what usually took cutting and pasting kick tracks in place in about half the time.

There is pretty much isn’t anything you can’t do with Pro-C2. The improved side-chain section is somehow both powerful and easy at the same time. The options are limitless on how you want to tame stereo tracks. You can process left separate from right, mid, separate from side, side separate from mid and trigger the compressor with just about any combination in between. On top of the staggering amount of control you have over content, you can see exactly what is going on at any given stage with the multitude of visuals all somehow cleanly displayed in one window. What FabFilter seems to understand is even though you have the options to see ever little thing, sometimes it’s best to be able to simplify and scale back. Pro-C2 does this very well. On top of visually seeing exactly what is happening in any stage of compression, this tool can help train newcomers to understand the basics compression by actually seeing feedback on the screen in combination with the help menu popups that show up when hovering over buttons. FabFilter has truly made a powerful compressor that spans all user levels and music styles. My only complaints involve the side-chain not being able to be active while hidden, the lack of an input level knob, and the sheer DSP usage this plugin wields. I get that quality sometimes needs quantity in the CPU area but sometimes my session would overload very quickly when I started throwing it on tracks (like you’re going to want to do). I found hiding the visuals to help a little but would still like the option of putting this plugin on every track I can without taxing the system too much. This only speaks to just how great of a dynamics plugin Pro-C2 is.
For more information and to buy, visit http://www.fabfilter.com/products/pro-c-2-compressor-plug-in