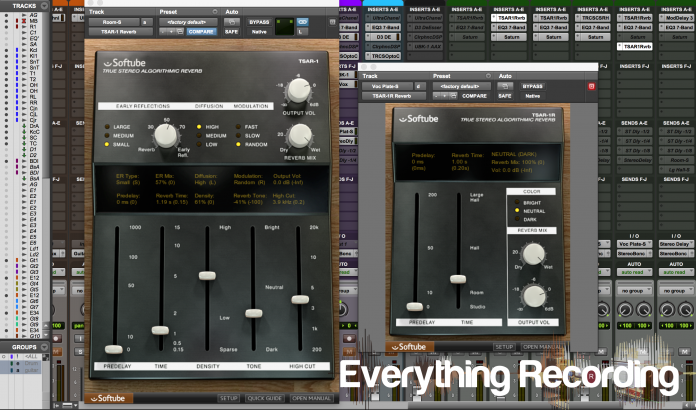 The reverb market either seems to be an afterthought for plugin developers or an exercise in control gluttony. On either end of the spectrum, you will get a bunch of modeled spaces that lack control or so many controls and graphs, you stick with the presets and never really explore. There is a small majority of plugins that balance both functionality and power, but Softube saw an opportunity to topple the existing regime with a powerful reverb that also encourages easy interaction.

TSAR-1 stands for TRUE STEREO ALGORITHMIC REVERB Model 1. It comes is all of the usual AAX, VST, and AU formats and installs via Softube’s Plugin Installer. Installation is very easy due to the update Softube made to the installer that encompasses all formats in one file. As was stated before, Softube is an algorithmic reverb. Unlike convolution reverb that models spaces with impulse responses, TSAR uses an algorithm to create space. This is especially helpful when you want the size of a certain room but not necessarily the color or tone. The room can also be easily altered to different sizes and depths. How TSAR stands out immediately is in what’s under the hood. While most reverbs use an engine for the left side and the right side, or even one engine per both, TSAR knows that in order to be true stereo like the name implies, you need 4 engines. Not only do the 4 engines work independently per side, they also work together to affect the other side uniquely. This allows for better depth and control over all parameters in a way that won’t wash out your source audio.

Not only is the reverb engine impressive, the interface is easy on the eyes as well. TSAR-1 takes on a similar look of some of the hardware units from the days of yore. It is extremely easy to use, with everything laid out in a very logical fashion. Unlike other reverb plugins, TSAR wanted to create a space that encouraged interaction and the interface really speaks to that. I mean, who doesn’t want to move faders around? The displays screen actually serves more purpose than just giving you numbers for each parameter. Each knob, slider, or LED has a display either above or below the control that gives instant feedback as to the value changed, but this display actually does more than that. A quick look to the right of the value of each control, you will see another in parenthesis. This value is your previous setting and can be accessed by clicking on the corresponding display. Once the setting is changed to the previous, the existing then swaps over to the parenthesis and can be toggled back and forth for comparison. This function is one of those “how did everyone miss this” features that I can’t believe hasn’t been used in more plugins and has become a must for my personal workflow. Another great feature the display gives you is a calculated Reverb Time that will take all current parameters and estimate the time the reverb tail will drop 60dB. Although this is not a hard and fast tool for calculating reverb, it is best to still rely on your ears and gut. On top of all of the other visuals in the display, TSAR-1 features an input and output meter on the left and right of the display to help tailor levels to taste.
Either Above or below to display, the controls sit. From the top you have your early reflections type and mix. Not only does TSAR-1 give a very simple choice of reflection size, it also allows a direct mix between reverb and reflections via the ER Mix knob to the right of the reflection size. One of the concepts at TSAR’s core is to readily give all of the tools to create both natural and other worldly reverbs and Softube believes that the key to a good reverb lies in the amount of control over the early reflections. This is apparent in the layout and Softube has laid these controls out in a very straightforward manner while giving them the spotlight in the interface. Next to the early reflections is the diffusion and next to that you have a modulation control. Fast and slow modulations will give a chorusing effect while random is used to give off a more natural sound. Finally at the top right is the output volume and reverb mix. Below the display are the faders that control predelay, reverb time, density, tone, and high cut. One thing to make clear is that the tone adjusts the color of the reverb tail while the high cut will affect both the early reflections and the tail. Using these together you can really dial in very detailed environments that add dimension to the track.

The presets are a perfect starting point and some are essentially just set and forget. You are given the choice between modern units, which are set at a -6dB reference level, and presets that take after some of the great vintage units. Softube even went as far as using the unit’s name in the preset so as to really make it clear the effect being achieved. One thing I wish I saw on this unit is the presets menu built into the interface. Of course this is no problem with most DAWs but with other sequencers like Maschine, who do not have a presets menu, all of the great starting points are lost. Of course this isn’t Softube’s fault but I bet there is a little room in the display for a menu. Also as a warning, it is advised not to gradually change parameters using automation because this will cause the unit to mute reverb due to how TSAR-1 handles noise suppression in artifacts. Although not being allowed to make automation changes in reverb isn’t a big deal, it would be nice to have the option for more creative ventures. Another enhancement that would’ve made this reverb absolutely perfect for me would’ve been a knob to add saturation. Softube has an incredible saturation knob and having it in this reverb would save a lot of hassle having to pull out another distortion plugin after the reverb.

In use, I found TSAR-1 to be one of the easiest reverb plugins to use. I was relying less on presets like I do in most reverb plugins and simply making my own. Softube has made a plugin that is very easy to achieve the exact space you are hearing in your head. TSAR-1 doesn’t have a setting that sounds remotely bad. Turn the knobs in just about any combination and you have a space that is useable in many situations… it may not be the current situation but you will find yourself saying, “I need to remember that one” quite a bit. It really is great to have a reverb plugin that “just works masterfully”, but Softube didn’t stop there…

TSAR-1 has a companion in TSAR-1R. Softube wanted to take ease of use even further than TSAR-1 and made an interface with even less controls. TSAR-1R has the same brains behind it that TSAR-1 has but the predelay has been cut to a max of 200ms. This is due to TSAR-1R being more of a tool to achieve natural spaces easier and most natural reverb sounds do not use more than 200ms. If you are having trouble dialing in the predelay, reflection, density, and decay time, TSAR-1R has one knob that does the work for you. The relation between the 4 parameters is handled internally to take the guesswork out of achieving the perfect sound for the decay time you want. Of course you can still manually trim the predelay setting just to the left of the time fader. You are also given the color control to dial in the perfect tone. Softube has somehow crammed an entire plugin perfectly into 5 controls. Amazing!

Simply put, TSAR-1 has become the first reverb I think of when going for a mix. It was referred to me by an engineer I know so I tried it out and was blown away. I can’t go back to the others. Sure they may have a control for every single concept of reverb but why should I have to think so hard and have a degree in acoustic theory when I’ve got twenty thousand other decisions to make in a mix. Why not take a few off and pick up TSAR-1 or TSAR-1R. You wont regret it.

TSAR-1 comes standard with TSAR-1R or you can buy TSAR-1R separately. Conversely, TSAR-1R comes standard with Focusrite interfaces as well. So why not go buy a Scarlett interface (review here) and get TSAR-1R for free along with some of Softube’s other great plugins. Once your foot is in that door, you’ll want the rest.
For more information, visit http://www.softube.com/index.php?id=tsar1