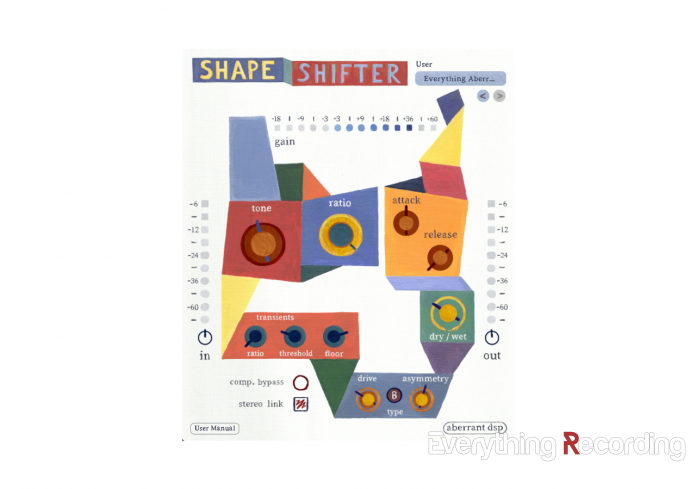 Since it’s summer, I wanted to take a vacation… away from reviewing the latest digital version of whatever classic piece of gear the internet has deemed their “Grail” (I’m starting to hate internet lingo). Of course, there’s nothing wrong with those plugins; it’s just we get a LOT of those requests.

Anyways, pilfering through Reddit, I took a wrong turn at r/audioengineering and ended up in r/edmproduction. After reading way too many posts on Zomboy and checking the results of a “Do I use a Legit copy of my DAW” poll (that I may or may not have created 😏), I dug into one of their favorite topics, the “OTT Compression” preset of Ableton’s in-house multiband dynamics tool. After scrolling through a cavalcade of “crayon-addled manifestos” about how to re-create it on different plugins, I saw a commenter suggest Aberrant DSP’s Shapeshifter (probably the smartest guy in that whole sub). So I kindly bid the subreddit adieu, went over the Aberrant’s site, and purchased the plugin.

A Lesson in the Up’s and Down’s of Compression

A little backstory before continuing. For those unfamiliar, Ableton’s “OTT” preset uses a combination of “upwards” and “downwards” compression to create a unique sound. Your standard compressor pushes down audio by a certain ratio once audio climbs above the set threshold. This is “downward” compression due to the way the compressor handles the audio – clamping down. “Upwards” compression is the exact opposite. Any audio that falls below the threshold will be brought up. It’s basically expansion. Why are we talking about this? Simple, Aberrant uses both of these techniques in Shapeshifter.

The dictionary defines “aberrant” as “departing from an acceptable standard.” I like this company already. When you’ve seen as many “milquetoast” plugins, anything but the ordinary is a breath of fresh air. Sometimes you want a little “strange,” and Shapeshifter fits the bill. Just look at that interface. It looks like my five-year-old niece designed it with construction paper. Of course, I mean that in the most complimentary way (she’s pretty good with a pair of scissors). I absolutely love the look of it. I’m sick of faux wood and aluminum with “randomized patina” (I’m looking your way, Slate). Sleek, cold GUIs are old news. I wish I could skin more of my plugins with Aberrant’s look. While the design may look Spartan, don’t let the exterior fool you. This interface has brains. 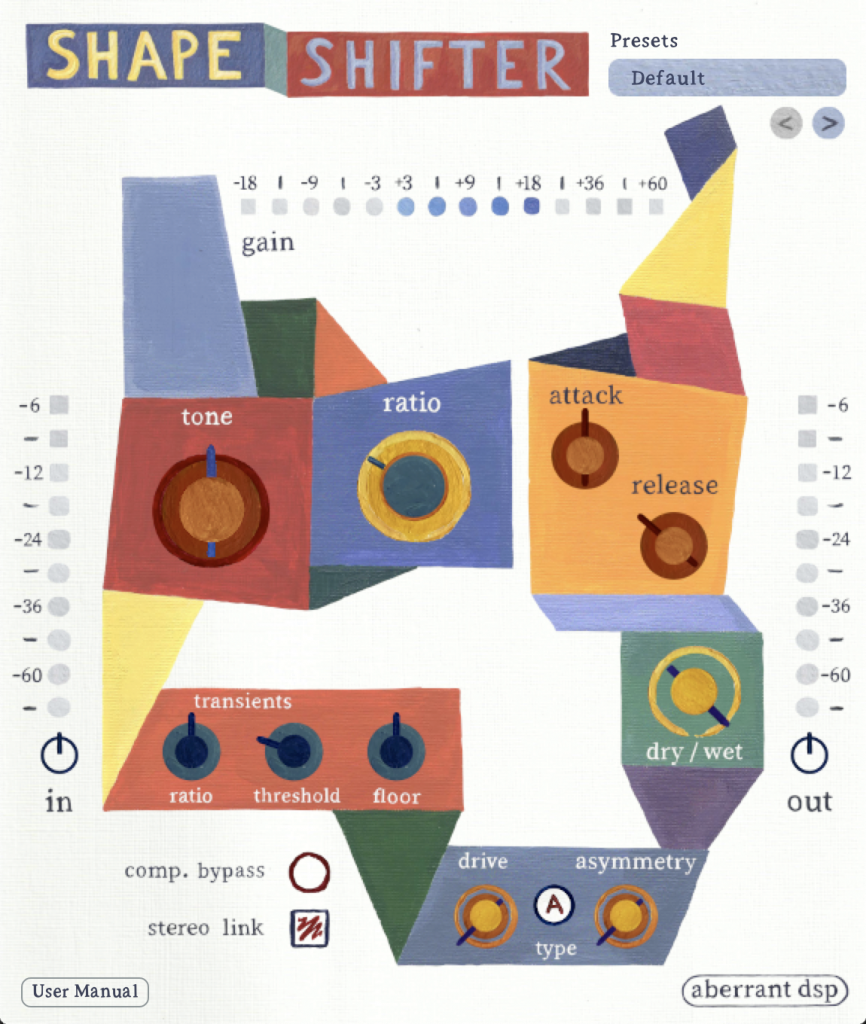 Despite the hand-drawn appearance, the controls are very smooth. I even like how the comp bypass and stereo link animate when enabling and disabling. A huge win in my book is having a button for the user manual right in the interface. When you have a plugin with not one but two ratio controls, you’re gonna want to skim a few paragraphs.

So, What Does it Do?

Honestly, Shapeshifter is doing a lot of the heavy lifting behind the scenes. I suspect the upward and downward compression is split into multiple bands, and the controls on the GUI work as the main control for all of them. What I hear just in the compression is similar to the Orban Optimod, a multi-band dynamics tool used by radio stations to cram as much signal in the FM band as possible. Dubbed as the “mix engineer’s nemesis,” you can blame the Optimod for why the same song on the radio sounds different than the album.

While the Optimod is designed to work on the whole tracks for radio, Shapeshifter packages the once “engineer reviled” piece of hardware into a creative tool, perfect for individual tracks, busses, and everything in between. On top of compressing, Shapeshifter also introduces distortion akin to their Sketch Cassette plugin for additional tone shaping.

Digging In the Dirt

Let’s get the easy stuff covered first. When the comp bypass is enabled (the marker scribble is in the circle), only the input volume, output volume, drive, asymmetry, and dry/wet control work. This utilizes Shapeshifters drive stages, which come in type A or B. Type A yields more saturation while B contains more distortion and soft clipping. Obviously, the drive control works to increase the amount while the asymmetry pushes more even-order harmonics as you increase. Think grittier, dirtier distortion as you increase the asymmetry.

Disabling comp bypass brings seven more controls into play. The bigger ratio knob controls both upward and downward compression ratios. Basically, how much you want to give your tracks “the business.” For feedback on which compression Shapeshifter is applying, the horizontal meter at the top makes it easy. If the meter is showing blue, upward compression is happening. If orange, you’re compressing downward. In many cases, you will see these colors swapping quite frequently due to your mischievous audio skirting both sides of the threshold.

The threshold control in the transients section is where you dial in where you want both upward and downward compression to occur. Additionally, Shapeshifter gives you an extra ratio. You may be wondering how that works on a compressor, but it’s very simple. The transients ratio is an added control only for the downward compression. This ratio is still linked to the big ratio knob. You’re just given more fine-tuned control over transients.

Upward compression has a similar feature for handling artifacts. The floor control changes any signal under the value to a 1:1 ratio, effectively stopping compression below. In addition, having a floor can wrangle the pumping from more quiet parts being brought up to the threshold.

On top of the attack and release controls, ShapeShifter comes equipped with a wet/dry blend knob and tone knob. While again, not explicitly explaining how it works, the tone control works similar to a tilt EQ. When turned to the right, you increase the high band compression level. Turning to the left will boost the lows. Rounding out the interface is a stereo link knob to unlink the left and right channel’s processing and input and output gain controls.

Hands down, this plugin is very much a heavy-handed effect. Yes, it can be used subtly, but you’ve got other tools in your belt to do this. You’re going to want to teach your tracks a lesson with Shapeshifter. Even if the controls confuse you a little, the presets are great starter points. Knob turning is encouraged with this plugin. You’re not trying to get surgical with Shapeshifter so go nuts. Push the audio to the brink of disaster, then blend it back in with the dry signal, or leave it fully slammed. Just be careful. It’s one of those “easy to overuse” plugins.

The drive section alone is worth the price of the plugin. I thought I had every flavor of saturation and distortion plugins from years of review, but I was wrong. These guys understand mangling audio masterfully.

You’ve read enough; I’ll give you an example. I placed Shapeshifter on the master bus and switched between plugin bypass and processed. I also soloed each instrument so you can hear individual tracks ran through it. In the end, I combine each element and run everything through Shapeshifter.

Want the preset? We’re generous here at Everything Recording. Here you go!

At the time of publishing this review, it’s $12.00 (usually $20.00). TWELVE DOLLARS. Even though it’s just barely above the first law of physics, this plugin is a blast to use. I can almost guarantee you do not own a plugin quite like Shapeshifter.

It’s like the Oxford Inflator had an illegitimate child with Soundtoys Decapitator.

Also, while you’re there, go pick up one of their awesome Sketch Casette T-Shirts.

Shapeshifter Rundown:
5 / 5 Reviewer
BUY
Pros
- The drive section is worth the price alone
- Very unique, heavy-handed sound
- Extra points for awesome "hand-drawn" interface
Cons
- None
Summary
Odds are you do not own a plugin like Shapeshifter. This one is a completely obvious buy. Even at double the price, it's still worth the money.
Rating
Affiliate