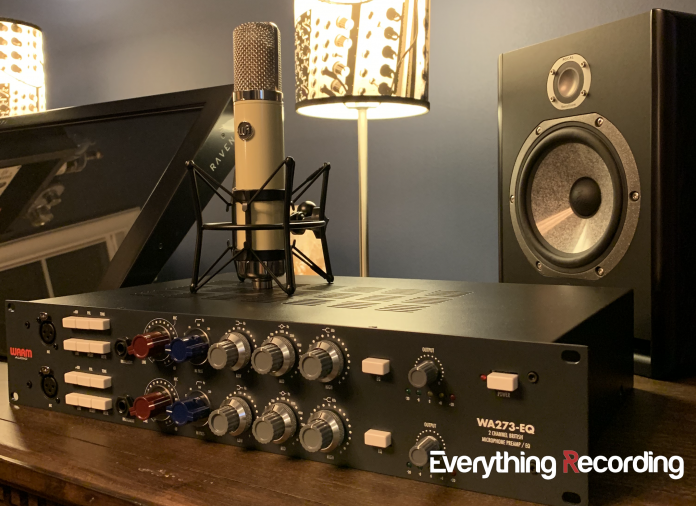 WA273-EQ Rundown:
5 / 5 Reviewer
Price: $1499 (WA273-EQ)
Pros
- Same sound and quality of any model twice its price
- Front XLR inputs make tracking in the control room a breeze
- Tone Knob gives added weight to the signal - Helpful metering LEDS
Cons
- None
Summary
WA273-EQ meets and beats the competition in almost every area. While different brands may have different interpretations, this model hangs with units almost twice its price. From bedroom producers to the Chris(est) Lord Alge, the WA273 line finds a home at either level and anything between.
Rating

When Warm Audio sent over the WA-251 for us to try out, I pulled some strings and had them send over a WA273-EQ as well. After all, I was doing a mic shootout, so why not have two channels of Neve-inspired preamps to serve as the “equal playing field”? Quickly, mayhem ensued, two mics turned to 3, and another preamp entered the ring to challenge the Warm Audio WA273. The result is three reviews – one of the channel strip, one of the mic, and one of both of them versus the world. Let’s start with part 1 – The Warm Audio WA-273-EQ.

I’m not sure if it’s well known, but the WA-12 is not founder Bryce Young’s first venture in a preamp. Well, before Warm Audio was formed, he had his hand in a 1272-based preamp that featured Carnhill transformers. How do I know this? Well, I own two of them. They have been two of my most used preamps. These original models resemble a more stripped-down version of the WA73 with a few different controls. Now the masses can have one of my unique “secret weapons” with either EQ or not. Since I love my 1272s so much, I had to see what Bryce’s take on a 1073 preamp with EQ would be like.

The WA273-EQ is a 2-RU, two-channel 1073 style preamp with EQ. Although the unit similarly mimics the classic preamp that has shaped music for years, Warm Audio have thrown their spin on the unit, offering several enhancements that make an already useful channel strip even more of a workhorse.

The build is very sturdy. Just watch body parts on the corners of the faceplate. They’re a little sharp!  A quick look at the internals shows Warm Audio did not skimp on the internals either. The unit is hand-assembled and wired; the transformers are custom made Carnhill Transformers, especially for Warm Audio. Tantalum and polystyrene capacitors were used in the signal path, and the output transistor was carefully chosen to work a little more smoothly when pushed at a harder gain.

One inconsistency I did see on the test model was dealing with the knobs. Some knobs turned with less resistance than others on the unit. I attributed this to being a test model. Still, after doing a little searching on the internet, I saw that others had a similar experience. I can’t pin this one on Warm Audio because the knobs outsourced to another well-known company. The Blore Edwards concentric knobs for the EQ are one of the more costly parts of the unit, and even though Blore builds them to last a lifetime, there is a wear-in period where some knobs have more resistance than others. People who have owned the unit a while initially told me they even out over time, and mine did as well.

As far as physical inputs and outputs, the 273 has plenty, offering both an XLR and instrument input on the front and back. Front plugs are especially handy when tracking vocals or instruments in the control room. Easy access eliminates either having to go behind the rack or using a patch bay. Plug the mic or the instrument directly in the front and track away. The back has even more options with both balanced line inputs and outputs in XLR and TRS as well as a line input. To top the unit off, an insert has been placed in between the preamp and EQ, turning the WA-273 EQ into a full-blown channel strip if you have a favorite compressor.

You would think with a unit fractions of the price of other 1073-based preamps would cut corners, but clearly, this isn’t the case by looking at the controls. Just about any control needed is at your fingertips. The standard phantom power and input controls prominently sit on the two rows of switches, but what sets this unit apart is all of the extras. A polarity, insert enable, and Tone button are present as well. The Tone button is similar to the one in the WA-12. With the button engaged, this model switches the ratio of the input transformer and changes the impedance. The button works just as the name implies by imparting a thicker, punchier, and colored sound to tracks. While Warm Audio suggests to use the Tone knob for dynamic and ribbon mics, experimentation is always implied. The results of different mics can render new possibilities.

The input knob is a stepped 22 position gain switch that makes matching stereo pair mics much more manageable, and the 18dB per octave hi-pass knob offers flexibility in stepped increments of 50Hz, 80Hz, 160Hz, and even 300Hz. The remaining three EQ knobs offer the classic +/- 16db low shelf, fixed “Q” +/- 18db mid-band, and +/- 16db high shelf. Each band except has the same frequency points as the original 1073 except for the high shelf, which borrows from the shelf of a 1084 EQ. If EQ isn’t needed, a button has been placed right after the high shelf to turn EQ off.

The unit has an output control knob for dialing back the level of the signal going into the interface. This output control is especially useful when pushing the input to get that classic “Neve(y)” goodness. Just under the output knob is an especially helpful LED level indicator.

For being one of the more wallet-friendly options when it comes to 1073-based units, the WA273-EQ doesn’t pull any punches. Coming in a $1499.00, this unit is no small purchase, but the number of extras the 273-EQ packs puts it in the same category as units over twice its price. The convenience of front panel XLR, hardware insert, and Tone knob make it a hard sell over any of its much higher priced competition.

Sonically it’s right up there with those very same brands as well. To my ears, it is a slightly more modern and open sounding version. The Tone button and a little EQ can transport tracks right back to classic sounding mixes using the original 1073. All with as much of the weight and drive people have come to know and love. I like having either option when I need it. Sometimes you need the best of both worlds in a preamp, especially for home studios on a budget. The 273-EQ delivers giving the option of either a cleaner sounding preamp or a weighty-toned classic. Other versions closer in price stick to the original 1073 design with the fixed high shelf, but Warm Audio sacrificed a little more money in their pocket for better functionality for you.

If you need to save a little money yourself, there are several choices to fit just about any budget. If two channels and EQ aren’t necessary, Warm Audio offers a one-channel version without EQ for $600. For only $200 more, the WA273 can add EQ. Two channels with no EQ is $1000, and for $500.00 more, front panel XLR and EQ is available. If you want my advice, save a little more and spring for the version with the EQ. How often are you going to get two channels of Neve 1073 EQ for 500$?

Complaints? I don’t have any. The ONLY improvement I would have liked to see was the ability to choose between placing the insert before or after EQ. That way, I can EQ into compression or vice-versa. I suspect that would have been a costly option to add that not many people would use.

The price gap between other versions of this rendition of a classic is pretty big. Still, the function and the sonic difference between the competition is not. I know everyone harps that Warm Audio is the budget-conscious alternative, but that can’t be farther from the truth. This unit does the same thing 3000$ versions do; it just does it at a different price point. The WA273 has just as much place in a home setup as it does in any professional’s A-Room. It’s a serious no brainer.