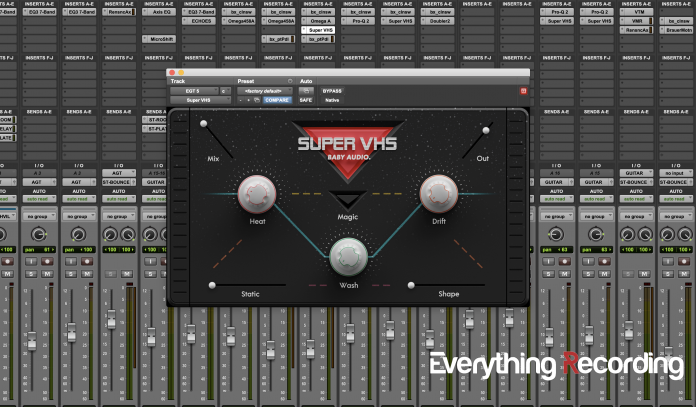 SUPER VHS Rundown:
5 / 5 Reviewer
BUY: $49
Pros
- Instant 80's vibe
- Saturation section of this plugin is top notch
- Easy to use. Just turn what you want up and blend with the Mix
Cons
- While there were no cons, I do wish I could get expanded controls for the under the hood enhancements.
Summary
Whether you just need subtle texture on a synth or all out "destroyed Wham Cassette" tone, SUPER VHS is the plugin for everything in between. While this plugin has all of the vibe of a hot pink Camaro IROC-Z, it feels just as comfortable in a modern track.
Rating

We reviewed Baby Audio’s I Heart NY parallel compression plugin and were impressed. To move onto their next plugin, we have to go back to a simpler time – a time that has recently made a massive comeback in pop culture. Where we’re going for this review, we don’t need any roads, or plugin presets (cue Back to the Future soundtrack). We head to the ’80s in this review of Baby Audio’s SUPER VHS.

Let’s dig a little deeper into the company that is Baby Audio for a second. In our last review, we learned the company’s primary platform: to make easy-to-use plugins that are so simple to use; presets aren’t even needed. Their additional objective is one I can genuinely get behind. This company doesn’t make exact replicas of old or new gear. Instead, they draw from great hardware to blaze an original path of plugins. Below is a quote from their “about” section, and I couldn’t love it more: “There’s a thousand 1176 emulations out there already. What the world needs is not #1001.”

From the looks of this plugin, I’d say these guys are right around my age, growing up in a time I look back on very fondly – the 80s. The music is as undeniably recognizable as the style. The two go hand in hand with the very essence of Hypercolor neon shooting neon laser beams from the speakers. The synths were somehow both warm sounding and bright at the same time, bathed in modulated reverb. SUPER VHS brings this back into a cold digital world.

Super VHS is all about that retro vibe. Instead of having to stack several effects plugins on a track, all of the tools for 80’s Synthwave is at your fingertips. SUPER VHS features six of the most useful tools in a producer’s belt. This plugin is a “more” type set of one knob effects, each working together to transform your DAW into a time machine. The list goes as follows:

On top of the controls, Super VHS also includes a few additional controls that can’t be adjusted by the user (internal EQ, Limiter, and Bit Crusher).

It’s funny how the very limitations that most likely annoyed some producers became the soundtrack to an era. Each of these effects adds personality on their own but combined, make something more significant than the sum of their parts. SUPER VHS has wrapped all of these magnificent artifacts into one simplistic package.

SUPER VHS adds vibe to tracks. Sure, the plugin can do the 80’s thing flawlessly, but it’s not limited just to that realm. Super VHS can sit only as well on a modern track as it can on your Stranger Things inspired opus. The ease of use makes dialing in your sound, lightning-fast.

HEAT’s saturation is right up there with some of the best in plugin dirt boxes. It works excellent on strummed guitar tracks that are lacking a little warmth. DRIFT can add subtle movement to dull synth pads, or background vocals, and WASH can push lead tracks more to the front with its gritty reverb. If you need to clear room in the center for vocals, MAGIC has you covered. While I like the sound, I do wish this control had a slider to control just how far on the corners of the stereo field the track will go.

On the subject of “things, I’d like to be able to control,” I’d also like access to the Internal EQ. I feel having a slider for a low pass filter or even the ability to bandpass for the “old speaker” effect would make this plugin even more useful. So many memories of listening to my tape deck had a bandpass effect, and I’d like to relive that in my music as well.

Despite a few creative improvements I’d like to see, I love the plugin. Super VHS is THE premier 80’s vibe plugin and more. I look forward to BABY Audio’s next release.