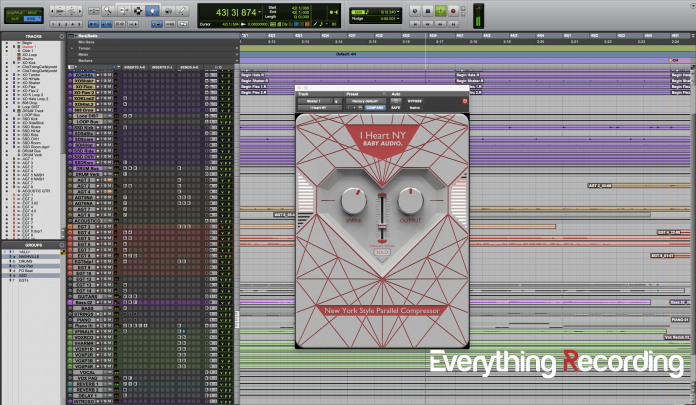 I Heart NY Rundown:
4.5 / 5 Reviewer
BUY: $29.00
Pros
- Quick and Easy Parallel Compression
- Easy to Use Interface
- Great Compression Algorithm
Cons
- Needs a Bypass Button for Level Matching
Summary
Parallel Processing is a must in these days but sometimes it can be time-consuming. You need a plugin that takes on the workload fast and simple. I Heart NY is your answer. This plugin is just as easy as it is great sounding. For the price of $29.00, you can't go wrong.
Rating

Newcomer to the game, BABY Audio has released two plugins in a short time. Both feature sleek interfaces and minimal knobs, but how do they fare once we peel back the glossy layer? We take a look at Baby Audio’s first release in this review.

Baby Audio is a relatively new player in the plugin game. This New York-based company was founded by two individuals who wanted to make powerful tools so simple; a baby can use them. Thus, the origin behind the name – Baby Audio. The guys in New York dream up the concepts and coding is done by a team back in The Netherlands. The collaboration is a “best of both world situation,” given that some incredible gear is developed by our neighbors across the Atlantic. I like to see teamwork like this.

In keeping with this theme, Baby Audio’s plugins feature straightforward controls, and no presets. While you may be concerned about not having presets, the reasoning behind this decision is simple. First, the company encourages inspiration and exploration. Second, the controls are few enough; you don’t need help.

The plugins come in all standard flavors of VST, AU, and AAX, with updates for the life of the product. They also come with the authorization baked into the install, which gives you one less serial number to copy-paste. Install and get right to work. Now that we’re all installed and loaded let’s get into each of these two plugins.

Admittedly, my initial reaction to the plugin’s name “I Heart NY” was lackluster. The title feels very, well, like something a teenage girl would name software. While I’m pretty sure the plugin’s name is a little tongue-in-cheek, don’t write it off as juvenile. New York-style compression was the forefather to the more boringly-named “Parallel Compression” and is a valuable tool for any engineer worth their salt.

Instead of having to set up a parallel bus to smash then blend your signal in with the source audio, I Heart NY does all of the work for you. I like the approach on the interface with its guitar stomp pedal appearance. I’m not sure why I feel this way, but a plugin that looks like a stomp pedal seems less intimidating, especially to newcomers. I honestly wish the plugin had a bypass button at the lower part of the GUI that resembled the on / off switch of a pedal for level matching. It would add to the aesthetics and functionality.

What it does feature is a SPANK Knob, Signal Blend Slider, and OUTPUT Knob. If you want to hear what the plugin is blending in with your source audio or use the compression at 100%, just hit the SOLO button under the parallel slider. Simple huh? The plugin creates a duplicate audio track behind the scenes and compresses separately, compensating for any phase or latency related issues.

I started by soloing the compression and dialing in the SPANK to get the best impact on the track. From there, I un-solo and blend to taste. As you turn the SPANK Knob up, the meter just to the left will show how heavy-handed the compression is acting, and you can monitor the output level via the meter on the right. A good starting point is to have gain reduction peaking just shy of the first red indicator of the meter on the left. After that, subtle adjustments to the source audio may be needed.

In very few words, it sounds great. Once level matched with the bypassed audio (which needs that shiny stomp button for bypassing!), audio has more impact and density. Anything that requires more pop will benefit from I Heart NY. I especially liked the plugin on the drum bus with its added layer of impact on transients. This plugin does its job quickly and effectively. While I don’t exactly know what’s going on under the hood, I suspect as you turn the SPANK knob, the compression is changing threshold, ratio, attack, and release settings. In lighter doses, compression seems denser with a faster attack. When cranked, I feel the attack is slower with a quicker release. With its attractive interface and versatile compression, I Heart NY is a no brainer, especially given the price.

For the producer in a time crunch, a musician who wants to create music, and everything in between, I Heart NY is an essential plugin.