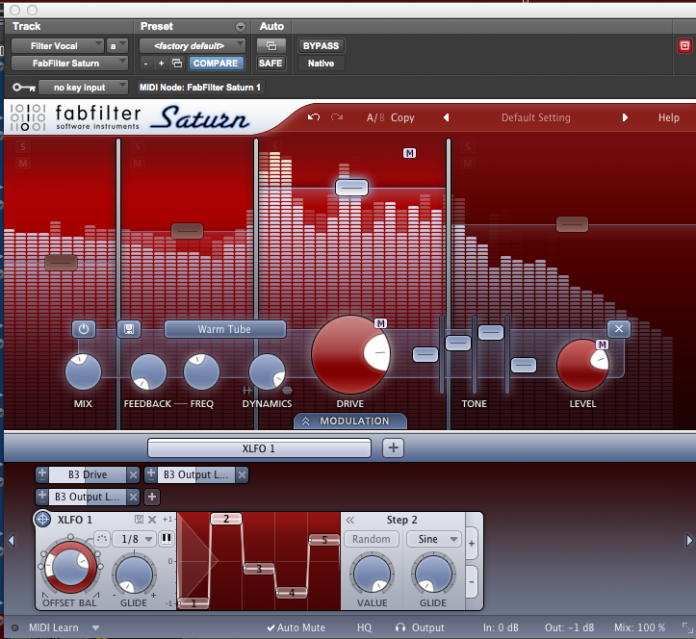 When I was given a chance to review FabFilter’s multiband distortion plugin, I jumped at the opportunity. This company has made a relatively fast sprout to the top of the crop of plugins, as well as being endorsed by some big players. I definitely wanted to see if the hype and constant mentioning on Pensado’s Place (by many different engineers) was that of product placement or legitimate greatness. After playing around with this plugin, I honestly didn’t even want to write a review

First off, I scoffed at the size of the install file… A mere 8 megabytes. Surely nothing great can come out of a piece of software THAT small. Install was extremely easy, registration… even easier. A simple copy and paste into a box, a reset of your DAW, and you’re off to the races. They even have AAX, which with the “Great Pro Tools Scare of Losing Great Plugins” looming, it put my mind at ease that I can hold onto it for a while. So I open up Saturn on a dry, unprocessed vocal track just to start playing with it. The interface has a very cool and inviting look to it. Although I saw it as sparse at first,  as soon as I started throwing audio through it, the beast awakened.

The interface is very easy to learn. Upon first booting the plugin, it explains that hovering over any value for more than 2 seconds will give you help on each respective function, and boy it did. The plugin is, in fact, its own manual. I was up and running in no time. More companies need to adapt this mentality. I don’t want to have to think too much when operating an effect. I want to live in the moment and create. And create I did. I was turning knobs left and right like a mad man, just pushing the boundaries as far as I could. Watching how the frequency bands bouncing in the background respond to my changing of values was extremely helpful. Also I liked how as you turned the drive knob up, the interface responds via color change (It’s the small things that make a huge difference sometimes). Then when I thought I had found all of the features, I notice a small plus sign when my mouse hovers around where the audio meters are jumping around. Things start to really heat up.

Now the fun starts. By clicking the plus, you can add up to six multiple bands that each use their own set of controls at the bottom. The vertical axis controls the width of the bands, while the horizontal controls the volume of each. This is where you can get very creative. I took a vocal part I had tracked and placed a filter on the lower frequencies and drove the mess out of them while turning them down in the mix. The result makes the track sound like it was accompanied by a synth lead following the vocal. Throw on some extremely warm saturation on the mids and you get this

Drums of all kinds will LOVE this plugin. I took a stereo track of room mics I had on a drum track and used a little saturation in the mids and smashed it with compression to add some edge to push in the mix on certain parts of the song.

Having individual easy to use dynamics, drive, EQ, and tone control per band make possibilities endless. Each control has extremely easy to use knobs, thus taking the grunt work out of sculpting and mangling your audio. But that’s not all. Just below the controls is a button called “Modulation.” This is where things get serious. Now, not only do you get the row of controls per band, you get more controls to control each control in each band… That’s out of control right?!! The possibilities are seriously limitless by adding EG’s, XY Controllers, Envelope Followers and XLFO controllers that are assigned to a control simply by dragging and dropping where you want the effect applied. You can take synth pads and add some serious groove to them, thus turning this plugin instantly into its own instrument. I went insane with this and started duplicating tracks and adding instances of Saturn on them. After a few hours, I created this vocal track with the help of some stereo widening and panning automation.

So why did I not even want to do a review on this plugin? Easy answer… this is by far the most powerful, easy to use, and needed effect plugin I own and I wanted this as my secret weapon. It took the place of about 5 plugins I use on a daily basis. Having that at your disposal is a priceless gem. Most distortion and filter plugins do one thing very well. This one does it all masterfully and with such ease, it makes you HAVE to reach for it each time. That’s a rare thing to do with a plugin.

I do have a few things I’d like to see added and changed though. The feedback knob was a bit touchy and I found myself not using it at all due to how sensitive the controls are. Drive it too hard and it’s going to scream at you very loudly. I haven’t quite learned how to tame that knob yet but I’m sure with more time I will get it down. Something else I’d like to see added is a button to add an pitched octave lower or higher of distortion. This would make for some cool distorted harmonies on lead parts and vocals. Almost like an Electro Harmonix HOG. Also, I wouldn’t mind having a drop down box of speaker or mic emulations like the MCDSP FutzBox (Review Coming Soon). I know those controls might crowd up the interface but maybe.. just maybe… FabFilter will make a separate pitch plugin if we ask enough times.

All in all, I’ve found a plugin I can’t live without. There’s not one single type of instrument that can’t benefit in some way by having some Saturn on it. I have a feeling it’s going to be doing a great deal of heavy lifting in your arsenal. Whether you’re looking for a subtle push in the mix or all out audio destruction, Saturn has you covered. The layout also makes it great as a tool that can be as scaled back or swiss army as you want with ease.  Saturn is easily my new favorite plugin and you all should be grateful I’m not a greedy person or you would have a huge distortion shaped hole in your life.
For more information, visit FabFilter’s website HERE.