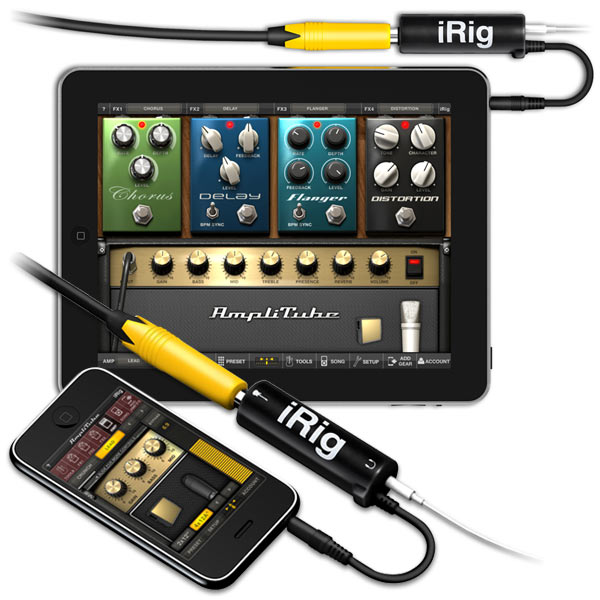 So the day before I put out THIS gift idea post, the site gets and email from a very strange guy so I figured featuring a review on the iRig and Amplitube will take care of what you guys might be wondering about the iRig and Amplitube – Is it worth the money?
Here’s what I got in the site’s inbox
Dear Bryan, I think your site is interesting. I have never seen someone write such stupidity, then turn around and pair it with sheer brilliance. You are my rock and the only thing keeping me from jamming my scissors in my eyes when I’m at work. I have a question. Sometimes when living at my moms (I’m 44) gets a little on the tense side when her boyfriend Charles is over, I like to travel. Do you have any suggestions of equipment I could use with my guitar that is extremely portable? – Love, someone DEFINITELY not named Bryan.

Well, first off the signing off with the love thing is kinda weirding me out but I’m glad I prevent you from assaulting yourself at work and your home life sounds incredibly… soo incredibly… sad, but I do have some suggestions for gear providing you have either an iPhone, or preferably an iPad. I have a very strange feeling you have both, but here is what I would recommend.


First we have the iRig. Cute lil’ guy huh?
This device is a prime example of how something so simple can change the way we use another device. There’s nothing really you can say bad about it. It utilizes the input / output jack on the iPad or iPhone and adapts a standard 1/4 inch instrument cable so it can plug into the headphone jack of either device. Now you’re probably asking, “how do you get sound OUT of it.” Answer: Easy, they’ve fitted a headphone jack to the top of the iRig. Now all you have to do is grab the six string, (0r 4, it will accept bass too) plug it into the iRig, plug the headphones in, and rock out. Simple enough right? At $40 you can’t beat it. My ONLY wish is that they fit it with a very small pre-amp to boost the sound. I really had to crank it when I hooked my computer speakers up to it, but in headphones, you won’t have that much of a problem.
“But Bryan, so far you’ve told us how to hook it up and I’m sitting here rocking out like you said, but my iPad isn’t doing anything.”
Ok just chill, you’re getting that twitch in your eye that creeps me out.
IK Multimedia has you covered with this! Amplitube.
Look at all of those different types of effects, and there’s more to come. They’ve launched a site within the app where you can buy more effects, so now you can customize and tweak your tone to near unrecognizable proportions. No word on if they have Auto-tune for guitar so you better go ahead and bank on having to practice those chops.
There are a few different versions and thing you need to know before you go jumping in and just getting the free version. The free edition of Amplitube comes with 3 stomps, 1 amp and cab, and 2 mics. You can buy other amps and stomps with the a-la-carte in app store, but would you really want to do that when you can just pay 20$ and get 11 stomps, 5 amps and cabs, and 2 mics. Now there’s one issue that is kinda a bummer. With most apps, if you buy the iPhone version, you don’t get the iPad version with it and vice-versa. I think the reason is because they’ve already released Amplitube 2.0 for iPhone but not yet for iPad. I know you’re probably not crazy about buying an app twice for each device, but think of it this way, the cheapest POD is $130 and that thing is a hard to use piece of crap. Trust me I owned a Pocket Pod and it’s not very user friendly and the distortion sounds like… well have you ever heard one of those Honda Civics the young kids like to put loud exhaust on? Yea… like that. The Pod X3’s are nice but you’re looking at $340 and I think Amplitube sounds just as good if not better for $300 cheaper…. well minus the cost of a of either an iPad, iPod Touch, or an iPhone, but lets face it… you either probably already own one. ALSO….Will a Line 6 Pod do THIS?
As you can see the interface is extremely easy to use. You simply click above each of the attractive looking stomp boxes and you can change out your signal chain. You can even have 4 delays if you’re into that sort of thing. One of the coolest things that really gives people that I’ve shown this to is the wow factor is the Wah Wah stomp. You enable it and as you move the device back and forth, it works just like a wah wah pedal does. It’s a little garbled sounding but it doesn’t make it any less fun. The auto-wah, on the other hand works great. Pretty much all of the effects sound great and the amps do exactly what they are described as in the selector. I do wish they had an amp model in between the clean and crunch. The clean has no breakover and the crunch has a bit too much overdrive, but I’m sure they’ll offer those in the in-app download store as this expands. The iPad version has the tuner, metronome, and song feature, where you can load a song or a rhythm track in and play along with it. The iPhone and iPod touch have Amplitube 2.0 already, which allows you to record and EQ inside of the program so you can throw down those Creed Shreds Leads, and put them over Creed concerts. I would DEFINITELY click that link. The iPad version will be coming out with a 2.0 version of Amplitube as well and I’ve been told it will be a free upgrade. So don’t hold out on getting this great piece of software. You’ll thank me later. I have even tried using it in live situations, and even though I’m extremely partial to analog stomp pedals, it worked just fine. I mean… its no Matchless Amp, but for $20 plus $30 for the iRig, you’re getting MILES more for your money. Its when you use it with headphones and practicing is where this really shines. It is a must have for any musician on the go.
I’m not really big on the rating system but seeing one at the end sometimes gives people who just scroll on to the next post a reason to read it so I would give the iRig and Amplitube a combined 9.5 based on the low volume with external speakers and the wah wah pedal use of the iPad’s motion detector sounding garbled.