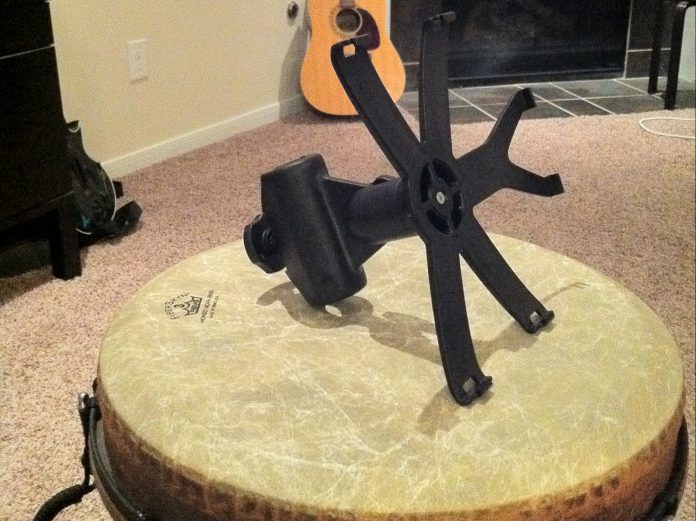 I got another email the other day and figured I would use it to the site’s advantage and what would you know… the product showed up too!!! Here’s the letter from the anonymous person.

My back is killing me from bending over my guitar to change the presets on my Amplitube; and on stage, our clumsy bass player INSISTS on doing interpretive dances during our shows. I fear he will either knock my iPad off of my amp or stomp on it doing one of his Tom Morello-esque jumping sessions. (see 1:00 mark) What can I do?

iKlip takes care of this
Now we all know you just want this so you can Twitter while playing on stage but IK Multimedia has thought of EVERYTHING in the iPad situation. This actually was the final piece to the “who’s gonna press the button” debacle I posted about in my Neyrinck V-Control Review HERE.

This product is a must for any musician who owns an iPad. Because of the recent influx of apps catered to the musician, the need for some sort of mounting system for the iPad has become blatantly apparent. So our good friends at IK Multimedia came up with this… The iKlip… A thermoplastic iPad mounting system that easily clips onto just about any mic stand. This is perfect for DJs who need a free hand, guitar players using Amplitube as discussed above, or you can even use this thing as a teleprompter with an app called “ProPrompter.” CRAZY right?

One of my main uses for this is going to be in the studio, when I’m using V-Control as a remote for my Pro Tools Rig. The review of that app can be found right in the link above.
Having a site with so many great readers like yourself, IK Multimedia sent me one to see what I thought of it and like just about everything else they make, I was not disappointed.

Yes the construction is plastic, but its sturdy. Its even pretty light weighing less than a 1LB. You would think something that holds like this would have to be heavier but they’ve used Italian design (I guess they’re REALLY good at holding things!) to stay out of the way of buttons and hold the iPad without any problems. One of the best parts about iKlip is it can be flipped horizontal or vertical to make use of whatever program you happen to be using. Plus it STAYS IN PLACE. One of my gripes about mic stands, especially boom stands are that they won’t ever stay in place when you put a heavy mic on it, but this mount holds the iPad perfectly and plays nice. I wish IK would make mic stands, cuz I’d replace all 18 of my boom stands with theirs simply based on how the iKlip holds.

Mounting this thing is lightning fast and once again… it clings for dear life to the mic stand. No slipping, no nonsense, no mercy. I can’t vouch for it’s longevity but let’s just say I’ve taken this thing on and off of different stands about 40 times in the past hour to see if any stripping of mechanisms would happen and I had to give up due to my hand cramping so it won. There’s not a single place on the mic stand this thing won’t perch on and not work to your liking. It will adjust to about any angle you can give it. I really wouldn’t be surprised to see Orchestras using this for each of their players replacing conventional means with digital sheet music but that’s only if you flautists can behave and not sit there and play each other in Scrabble on it. I’m onto you!

I only have one gripe for the iKlip and its not even really too cumbersome. When changing the orientation of the iPad (ie: horizontal or vertical) the only way this can be changed is by removing a screw. So if you want to do a quick orientation change, it would take getting a screwdriver out and after so many times of screwing and unscrewing, you might thread out the hole it goes in if you’re not careful. I wish they could have developed a spring loaded type lock that you could pull out and turn then lock it back in place. The locking mechanism is already in place and it wouldn’t fall off without a fight. I think even a bigger screw would help, but honestly DON’T let that small issue that you probably won’t even notice keep you from buying this spectacular product.

I’m actually posting this review right now from my iPad snugly mounted to my Atlas mic stand and I must say this is very comfy. I might end up keeping a mic stand by my couch just to browse the web, so you don’t even have to be a musician to use this. As a matter of fact, I think I’m going to buy another one just to keep at the house and bring the other to the studio. That’s how much I like this product.

Look, you know you want one, so why not just click RIGHT HERE and buy one. You won’t regret it, unless you don’t have an iPad and if that’s the case, go get one of those and get THIS and THIS too.