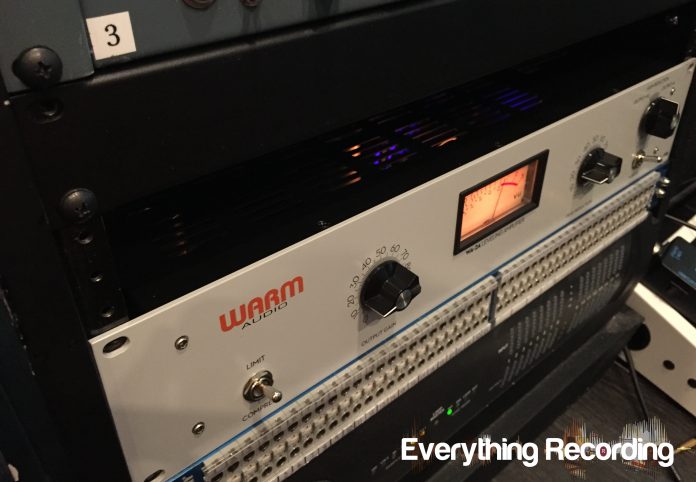 Warm Audio has returned with another rendition of one of the most used compressors in the history of recording. The WA-2A, as the name gives away is a true-to-life version of the LA-2A, a tube leveling amplifier that has showed up on countless recordings. Known for its use in smoothing out vocals, solidifying bass, and bringing life to pretty much anything that can be recorded, the LA-2A is a perfect tool for the home studio and major league recording company alike. The problem being with the former is the price tag and maintenance cost of vintage versions leaving the engineer on a budget out in the cold. Bryce Young, founder of Warm Audio has solved this issue with the 1176 based WA-76 (review HERE) and the Pultec based EQP-WA. Let’s see if he can pull it off again.

Despite the ridiculously low $899.00 price tag, it doesn’t appear that the WA-2A’s internals suffered cutbacks. The inside features discrete, class-A, all tube circuits on a hand populated board, custom made CineMag transformers, and a socketed Kenetek T4B module. The WA-2A operates on two 12AX7s, one 12BH7, and one 6P1 mini power tube. Although the vintage models use the 6aQ5, scarcity has caused this model to use a different power tube. The tube used by Warm Audio was very similar and even can be replaced by an original 6aQ5 if you track down a working model. I would venture a guess to say that it would not change the sound of the unit by a discernable amount but if you want bragging rights to your girlfriend, go right ahead. Another bonus Bryce added into the WA2A involves the optical attenuator. Again, if you feel nostalgia coming on, an original T4A, B, or C can replace the Kenetek model. This can actually change the characteristics slightly and would give your unit a distinct sound.

Most of us know the interface of the LA-2A, therefore controls do not warrant much discussion. It is recommended to leave an air gap between other gear in your rack. On top of providing air to the unit, the vent grille’s in the top glow a slight blue from the inside. The WA-2A contains almost the exact controls on the front side as the LA-2A: A Limit / Compress switch, Output Gain, Peak Reduction, Metering Settings and Power switch. What makes this version slightly different than most lies in the back panel.
Like the vintage model, the rear panel features a grounding lug. Even though the grounding pin of the AC power cable should handle the grounding, the lug is still there for legacy compliance. The Meter Adjust knob is used to calibrate the VU meter. Upon initially unboxing the unit, it is recommended to calibrate the meter to read zero. In order to do this, the unit must not be stereo linked, any cables plugged into the inputs or outputs and the gain and peak reduction must be turned to zero. Once the Meter Select switch is set to gain reduction, twist the Meter Adjust knob until the VU meter reads “0”. Because of the design of the VU meter and photo cells, the meter can drift at times. This is due to the discharge of energy in the photo cells. If the meter is reading off from zero upon powering, give it 10 to 20 minutes to allow everything to balance out. Continuing the true-to-vintage design, the WA-2A features a knob that would be even more useful on the front. The Pre Emphasis knob works similarly to a tilt EQ on the sidechain detector. Move the knob counter clockwise and the detector will be less sensitive to high frequency transients. Turn the knob clockwise and the detector will react less to bass frequencies. This knob can be used creatively to sculpt how the compressor reacts to its material. Even though the EQ doesn’t show up in the audio signal, the influence the compressor has on frequency content can shape the tone of the track.

Similar to the WA-76, the WA-2A features the stereo link option whereby a TRS 1/4 “ cable can blend the sidechain signal across both units for a more balanced dynamics control across the stereo spectrum. On top of this traditional use, two units can compress based on the sidechain input of just one unit. This can be used to “duck” the audio signal. Although the sidechain detector works across both units, both compressors must be independently set to maintain stereo balance. One WA-2A cannot control settings for both units. Although it would be convenient to control the stereo compression via one unit, the flexibility of using stereo units can still be very useful. Calibration for stereo use requires a slightly different method and must be performed consulting the extremely easy-to-use included manual.

On top of these controls, the back panel features both transformer coupled balanced input and output in both TRS and XLR. These two connections per input and output are wired in parallel but it’s best not to use both XLR or TRS at the same time on either connection.

As you can see, the unit is fairly straight-forward with a few unique tricks. But how does it sound?

As a test, I essentially tracked an entire song using the WA-2A on every single channel. Functionally, the controls feel great. The knobs don’t feel cheap and dialing in precise settings are very simple. Like I stated before though, I did wish the Pre Emphasis knob was more easily accessible as I was adjusting it per instrument. On bass, the WA-2A was able to tame the low end without distorting of losing the bottom part of the signal. This was made even easier with the Pre Emphasis pushed to cater more to high frequencies. Using the same settings with Pre Emphasis pushed a little further, I was able to compress the higher frequencies a little more than usual to smooth out harsh acoustic tracks. This made the acoustic guitar bloom a little more in the low end while taming the highs. I even used it on a mono room mic for drums where I reamed the transients. The WA-2A handled all the material giving me exactly what I wanted without too many artifacts. Even electric guitars benefitted from some subtle love, mainly just running the track through the WA-2A to get some transformer vibe from the CineMags. Finally, vocals were immaculate with the WA-2A. This unit shines on vocals taming the highs while handling the transients with ease. I paired it with a Blue Robbie preamp and put it up against my Universal Audio LA610 where it added a little more detail to the top end of the vocal track. Although I didn’t have two units, I could guarantee this unit would spice up any virtual instrument or drum loop.

Essentially it works brilliant on everything. The only issue I really had with the unit was that every time I powered the unit on, I was calibrating the VU. I could never quite get the VU to stay at zero. This may have just been a temperamental demo unit but other than that, this unit is every bit of an LA-2A as the original. I love the Pre Emphasis and only wished it were a control on the front of the unit. The WA-2A really is a testament to the care and craftsmanship Warm Audio gives at such a low price point. Sure you could go spend thousands on a vintage model, but why do that when a $900.00 model can do the trick and hell… with a few under the hood modifications, even sound exactly like the model that constantly needs servicing and repair. But hey, some people like high maintenance.