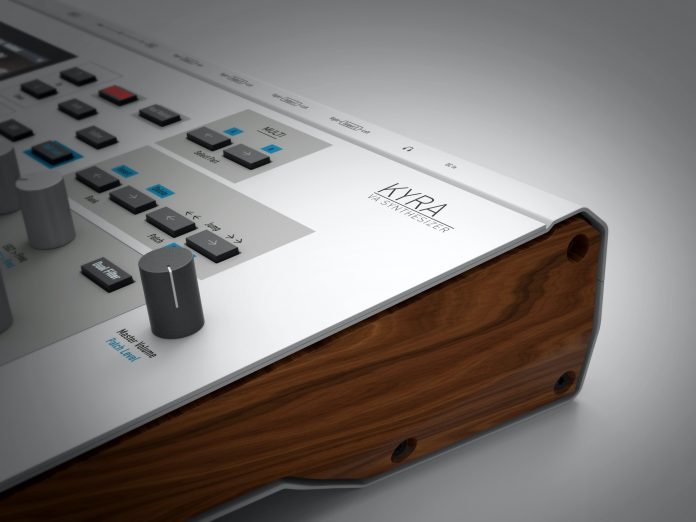 Waldorf, in an attempt to be a first has announced KYRA, an FPGA (Field-Programmable Gate Array) synth. They teased an image of a beautiful wood and stainless keyboard with claims of 32x oversampled hardware with dual wavetables, 4000 wave shapes, and 10 oscillators.

REMAGEN, GERMANY: hot on the heels of having turned heads and opened ears with its innovative flagship, Quantum, a high-class hybrid synthesizer showcased to widespread critical acclaim at The 2018 NAMM Show in Anaheim, California earlier this year, high-quality synthesizer developer Waldorf Music is proud to announce a full production launch and general availability of Kyra — the world’s first fully FPGA (Field-Programmable Gate Array) powered synthesizer featuring 128 voices (regardless of settings and effects), each with 10 oscillators per voice, and eight-part multitimbrality (with each part having its own dedicated nine-module effects unit) — at The 2019 NAMM Show, January 24-27, in Anaheim, California…
As an extremely powerful VA (Virtual Analogue) synthesizer literally like nothing else out there — thanks to leveraging the latest FPGA technology to significantly outperform legacy DSP (Digital Signal Processing) powered competition, Kyra’s crowning glory comes courtesy of its state-of-the-art audio quality: think 32x oversampled hardware with dual wavetables providing over 4,000 waveshapes! With 10 oscillators — that can be doubled to 20 by using two voices — each offering a wide range of features, including true stereo operation, hard sync, FM (Frequency Modulation), and ring modulation, Kyra starts shaping up as a serious sonic force to be reckoned with… without even factoring filtering into an already seriously impressive-sounding instrument! Indeed, Kyra’s resonant filters are accurate oversampled emulations of classic analogue ladder filters with 2- and 4-pole configurations (offering -12dB/oct and -24dB/oct of magnitude decrease, respectively). Saying that, two linked or independent filters can be used in Dual Voice mode, making for even more creative options. On top of that, there are three envelope generators, three stereo LFOs (Low Frequency Oscillators) with 64 shapes and MIDI (Musical Instrument Digital Interface) clock sync, an arpeggiator, full keyboard microtuning, and true polyphonic portamento, as well as a comprehensive 18-channel modulation matrix to Kyra’s notable name.
Notably, Kyra comes highly specified for effects, each of its eight parts featuring a three-band EQ with sweepable mid, dual tube limiters, formant filter, distortion, six-stage phaser, stereo digital delay, comb/flanger/chorus/doubler unit, and a programmable reverb. All effects units on all parts can be used simultaneously and run at Kyra’s native 96kHz sample rate.
Kyra clearly delivers when it comes to connectivity by boasting four assignable, balanced 32-bit/96kHz stereo outputs, a headphone output, low-latency DIN MIDI, a fully class-compliant USB2 implementation for MIDI, and a stereo 24-bit/96kHz audio stream for each of its eight parts. Production-wise, there is also a USB (Universal Serial Bus) audio return feature, so Kyra can render final DAW (Digital Audio Workstation) audio under ASIO (Audio Stream Input/Output). An ASIO driver is provided for Windows users while Mac support is out of the box.
But if any aspects of this impressive instrument already have a ring of familiarity about them then Musikmesse 2018 in Frankfurt am Main may have played its part. Put it this way: Waldorf Music CEO Joachim Flor found himself transfixed there. “It was more of a coincidence to have discovered Valkyrie during a tour of this year’s Frankfurt Music Fair, but I was immediately aware of the fact that this was probably one of the most exciting synthesizers of recent years,” he admirably admits. “I got into conversation with its independent UK developer, Manuel Caballero, and I’m now looking forward to working with this talented, innovative individual, who is also a great guy! Under the direction of Waldorf Music, Valkyrie flies forth into a joint production project called Kyra, which will be shown and delivered at NAMM in 2019.”
Fortunately for Manuel Caballero, the feeling was clearly mutual — Musikmesse mission accomplished. “After nearly four years in the making, I went to Musikmesse with the intention of finding an established partner for Valkyrie,” he reveals. “There’s little doubt that Valkyrie’s reveal at Musikmesse caused quite a stir in the synthesizer world and I had set the bar high for potential partners to bring the instrument to market. As a result of this, I’m pleased to announce a partnership with Waldorf Music. Few companies can match their track record of innovation and delivery spanning several decades. Working with Joachim Flor and his technical and design team to achieve this is an exciting and efficient partnership as we work together to launch the instrument at NAMM in 2019. Waldorf’s proven heritage in product design, manufacturing, and distribution leaves me to do what I do best, which is applying the most advanced technologies to the art of music, and I look forward to a continued deep working relationship with the Waldorf team.”

Kyra is initially scheduled for full production launch at The 2019 NAMM Show, January 24-27, in Anaheim, California, competitively priced at €1,899.00 EUR as a desktop/rackmount model (with a keyboard version to follow later in 2019).
Stay tuned on http://waldorfmusic.com

Wooo Woooo All Aboard The Gain Train