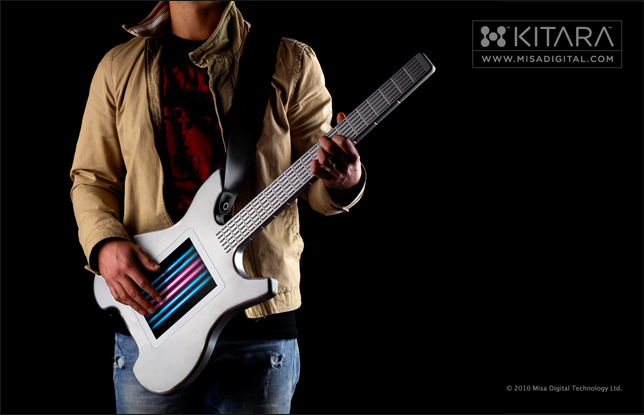 Well you can thank my good friend Jackie for this one. This is Kitara and it seems pretty cool. Although you don’t get the satisfaction of building true finger strength and it still doesn’t sound like a real guitar, it looks like it would be really fun to do Muse sounding guitar synth riffs with it. Although it will still make you feel empty inside because Matt Bellamy can do all of this with a REAL guitar, it should spark some form of creativity. The guitarist in me does have to say tisk tisk to this because it doesn’t have strings and I won’t call it an instrument. I’ll just say its what an iPad is to a Computer, a fun toy that can ALMOST do what the big boys can.

The digital party has been going on for some time.
The studio engineers were invited. The keyboard players were invited. Even those damn drummers were invited. While the guitarists have stood waiting for the call.
We all know the reasons. Those pesky strings are tough to digitize. MIDI guitars are too temperamental. If guitars were really meant to be digital, they’d have buttons instead of strings.
No argument here.
That’s exactly why we created Kitara.™
Kitara is the stringless guitar. Your ticket to a world of digital sound and effects. Easy to pick up, very tough to put down. Stage or studio, simply plug in and play.

Here’s a video of some headless dude playing it. Impressive! I can’t even play with my eyes closed. And sorry ladies, I see a ring on his finger, so that dream of marrying a guy who can’t talk back is dashed.