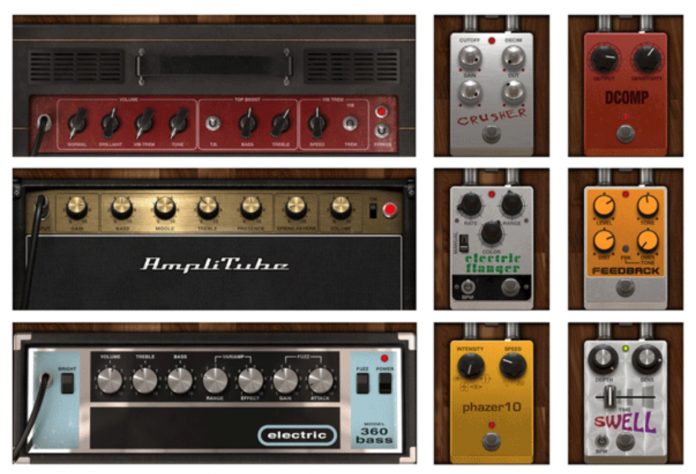 Amplitube has become a staple among musicians on the go due to the iRig, giving a multitube (yep, multitube) of amps and effects right on your phone. Now they have updated their flagship iOS app with even more.

April 20, 2017 – IK Multimedia is pleased to announce that a free update for AmpliTube for iPhone® and AmpliTube for iPad® is now available in the App Store®. This update provides more included free gear with the full, LE and CS versions of the app, and adds the availability of Fender® Collection 2 for iOS to guitar and bass players providing them the widest selection of amps and effects on the go.
In the full version, this update adds 9 new bonus gear models right from the start, including 3 new amplifiers and 6 new stompbox effects to craft amazing guitar tones. New stompbox effects include the Swell volume modulator, an Electric Flanger effect, the Crusher overdrive, Dcomp compressor, Feedback distortion and Phazer10 phase pedal. New amp models include the British Copper 30TB based on one of the most popular vintage British combos ever, Vintage Metal Lead and the 360Bass amp, all with their matching cabinets.
The LE and CS versions are also loaded with a wide variety of gear and the latest update includes 4 new stompbox effects; Crusher, Dcomp, Feedback and Phazer10, plus two new amp models, the Vintage Metal Lead and the 360Bass.

With this update AmpliTube for iPhone and iPad reinforces its position as the most powerful and best sounding amp and effects modeling app available on mobile devices.
Not only does AmpliTube lead the guitar app category with a huge array of over 100 amps and effects, it is the only app featuring officially approved models from the most sought after iconic brands such as Fender®, MESA/Boogie®, Orange®, ENGL®, Soldano®, Marshall® and Ampeg® along with gear collections from artists like Slash and Jimi Hendrix™.
AmpliTube is also the ultimate mobile guitar tone playing and recording studio that includes an exclusive feature set that can’t be found anywhere else such as its hyper realistic cabinet section with 3D mic positioning, 8 track DAW/recording studio, 4 track looper, UltraTuner™ – the most precise guitar tuner available, a play-along section with solo cancellation and much more.
IK offers a complete “start to finish” music production system when used with the extensive range of iRig mobile guitar interfaces (such as iRig 2, iRig HD2, iRig Pro I/O) and controllers (like iRig BlueBoard) for iPhone, iPad, Mac® & PC.