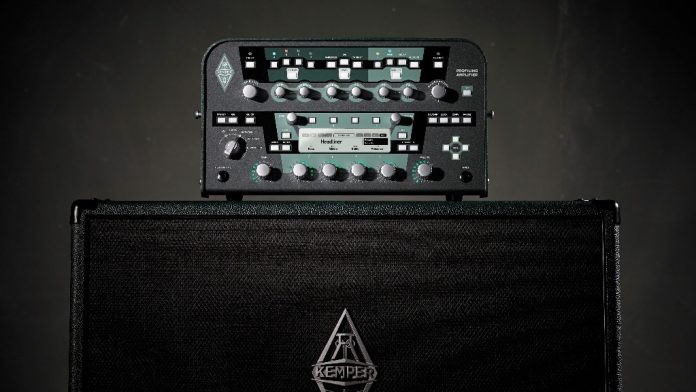 This is a big one! Big as in space (Reverb). Kemper have announced version 5.7 of the acclaimed Profiler OS with five new reverb modules.

The Spring Reverb is inspired by the most sought-after spring reverb for guitarists: the Reverb Tank from 1963. Two prominent characteristics define this legendary reverb sound: one is the lack of low frequencies, due to a steep low cut filter used in the original design. The other is the haunting sound that resembles water dripping in a cave. To faithfully recreate this effect, Kemper have provided a dedicated intensity parameter called “Dripstone”.

The Natural Reverb is based on the latest digital reverb science and technology. Natural Reverb is capable of creating all kinds of natural sounding rooms — from ambiances too short to be noticed, to lush and epic spaces. This also includes plate reverb simulations, and even artificial and synthesizer-like reverb pads — all achievable with just the turn of two or three knobs.

The Echo Reverb is a delay combined with a reverb. In other words: a Natural Reverb with a feedback control added to its pre-delay to create rhythmic repetitions of the reverb tail. So, instead of using a straight delay type for a rhythmic enhancement, use the Echo Reverb for diffuse and soft echo reflections, when you find a regular delay is sounding too concrete or direct for your needs.

Effects slots/ placement – Now since OS 5.7 all the FX of the Profiler incl. Delay and Reverb can now be positioned freely into any FX slot before or after the Amplifier section. This means that the guitar player could place 6 Delays and 2 reverbs around the Amplifier … which might make no sense, but it is possible. To put Delays and Reverbs into their designated slots makes still sense though as these slots have special routing features which can be defined in the global rig parameters.

And then some …
The Space effect is identical to the global version of Space in the Output Section. It produces the natural reflections of a small, neutral-sounding room. The most obvious result of these reflections is that a mono signal is converted to stereo; to soften the transients, a little diffusion is also applied. You can still combine the Space effect with delay or longer reverbs, without creating too much reverberation.

The algorithm is designed to be the shortest possible room effect and therefore has no deep parameters. Use the Intensity parameter to control the strength of the effect.

The Legacy Reverb is based on the first reverb algorithm created for the PROFILER. The main purpose of this reverb type is to maintain full backward compatibility with Rigs that have been created before the advent of PROFILER operating system 5.7.

Pricing and availability
Kemper PROFILER OS 5.7 is available for free to all owners of a Kemper PROFILER ™ from the Kemper Website: www.kemper-amps.com/downloads