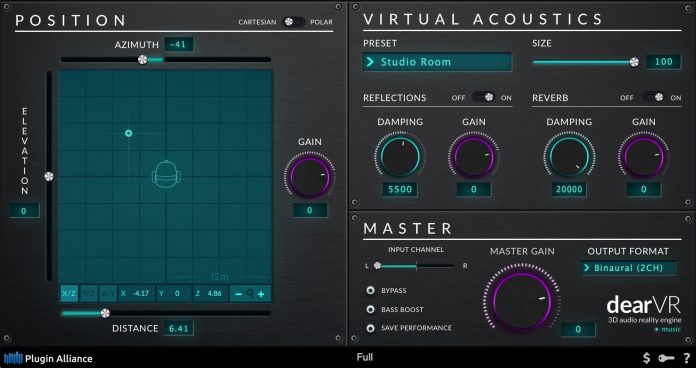 Before recently, we only had to worry about Stereo and Surround mixes. Now with 360 cameras and Virtual Reality coming to the forefront, there is a new frontier. Dear Reality has just the tool to take on the emerging technology or Augmented and Virtual Reality.

SANTA CRUZ, CA, USA: Plugin Alliance, a new ‘Über-standard’ supporting all major plugin formats and uniting some othe best-known international audio companies under one virtual roof, is proud to partner with Dear Reality announcing availability of dearVR pro and dearVR music — making the German spatial audio technology and virtual acoustics software specialist’s state-of-the-art audio algorithms available as two plugins providing all the tools needed to create stunning, immersive 3D (three-dimensional) audio for VR (Virtual Reality) and AR (Augmented Reality) films, games, and video from within their favoured DAW (Digital Audio Workstation) workflow — as of October 17…
Thanks to the comprehensive dearVR pro and streamlined dearVR music, producers, mix engineers, and musicians need not burden themselves with expensive middleware, unwieldy software bundles, and complex routing schemes to create totally immersive 3D audio for films, games, and video since all essential tools are now conveniently contained in a single plugin interface for direct processing of tracks from within their favoured DAW workflow.
As a complete 3D audio toolkit, dearVR pro is the ultimate solution for professionals working with VR and AR needing no-compromise, state-of-the-art performance with all the workflow advantages of a self-contained plugin. Its powerful, yet intuitive, GUI (Graphical User Interface) allows producers to position an audio track anywhere in a 3D soundstage — both behind or in front of the listener, above or below their head, to the left or right, closer or farther away… and all by simply dragging an icon representing the track in the plugin’s XYZ pad, or by using separate sliders for adjusting the sound’s ELEVATION, AZIMUTH, and DISTANCE from the listener. Producers can choose from 46 vivid VIRTUAL ACOUSTICS, featuring true-to-life 3D imaging and depth, in which to place an object’s sound and move it around in real time, with full automation support. Selections to choose from are abundant and include concert halls, car interiors, variously-sized rooms (Church, Cellar, Staircase, Bathroom, Booth, Warehouse, and Live Arena), and Outdoor Street, and Live Stage, to name but a few. Each environment is instantly and independently recallable per plugin instance, letting the producer place each object’s sound in a different space.
Still further, the shape, dimensions, and texture of each virtual space can be modified using controls that adjust its SIZE, DAMPING, and balance of early REFLECTIONS and diffuse REVERB. In REALTIME AURALISATION mode, turning six knobs respectively adjusts the distance from the listener of the four walls, ceiling, and floor to match onscreen visuals. As the user moves a sound around to match the corresponding onscreen object’s movement, the delay times and directions of arrival for early reflections bouncing off these virtual boundaries change — just like in real environments. An OCCLUSION control adjusts the sound of the object to realistically match its being blocked by another virtual object in line of sight to the listener. And if a track’s sound doesn’t move in perfect sync with its corresponding visual element, other controls can be used to scale parameter ranges for azimuth (AZIMUTH SCALE) and distance (DISTANCE SCALE) to make picture and sound match up flawlessly.
Furthermore, dearVR pro outputs the highest-quality 3D audio in seven different delivery formats (including 360-degree videos on YouTube and Facebook), meeting all professional requirements for any AR or VR productions. In addition to two-channel binaural format (for immersive playback using conventional headphones), producers can choose four-channel first order, nine-channel second order, or 16-channel third order Ambisonics output in either AmbiX or FuMa (Furse Malham) format. The plugin’s 46 stellar VIRTUAL ACOUSTICS can also be used like conventional reverbs in 2D (two- dimensional) stereo mixes, making them indispensable for music production.
Purchasers can, conversely, choose dearVR music, a streamlined version of the plugin for entry-level 3D audio applications — perfect for those who don’t need the full firepower on offer with dearVR pro. While dearVR music makes available the same XYZ pad, ELEVATION, AZIMUTH, and DISTANCE sliders asdearVR pro, other controls respectively adjust the SIZE, DAMPING, and balance of early REFLECTIONS and diffuse REVERB in its 18 VIRTUAL ACOUSTICS, including Concert Hall, Church, Live Stage, Drum Room, and more besides.
Better still, dearVR music outputs the highest-quality 3D audio in binaural or four-channel Ambisonics format (used for 360-degree YouTube videos). As such, it’s the perfect vehicle for musicians and audio engineers wishing to attract more listeners and gain more traction on social media by incorporating immersive 3D audio into their mixes. And, as with dearVR pro, dearVR music’s VIRTUAL ACOUSTICS can be used like conventional reverbs in stereo format, but with less fuss — mouse-dragging a track inside a virtual space is much faster, easier, and simpler than setting up an aux, effects send, pan controls, and wet/dry balance for a reverb plugin.
Whether working on cutting-edge VR and AR productions or immersive music mixes, Dear Reality’s pioneering plugins put the power of its state-of-the-art 3D audio algorithms in the hands of discerning DAW users for the first time to devastating effect… just ask Simon Franglen!