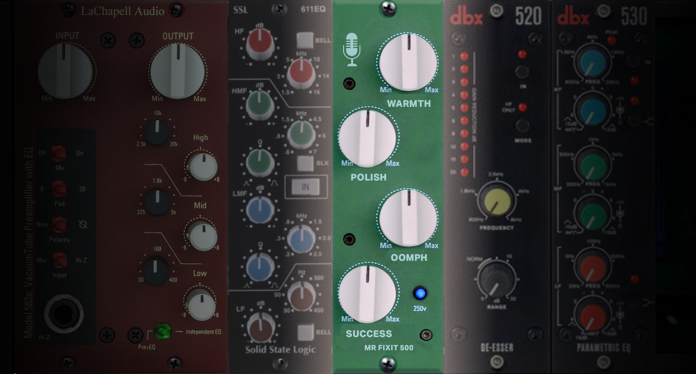 Today, I’d like to introduce our newest contributor to Everything Recording. I was browsing  the Reddit r/AudioEngineering sub and saw an incredible post by B. Church. He posted a very concise writeup on something we all get a little too caught up in – Preamps. While this website deals in announcing the latest and greatest new piece of gear, sometimes we all need to recenter our perspective. I reached out to B. Church and asked if I could share the post and he kindly obliged. Enjoy.

If you’ve come into recording within the past five years, especially as a hobbyist, you may have never had the opportunity to record in a larger recording facility. You may have never even recorded anywhere other than your home studio. And, if you’re reading this, your techniques and opinions may have been somewhat formed by online resources. Which is great.

Some people might look down on that. I don’t. I cut my baby teeth with a freaking 4-track cassette recorder I borrowed from a friend in 1989. There was no YouTube, no Reddit, no online community to learn from really. Admittedly I am a little jealous – there is a LOT of information out there. Of course, some of that information is opinion, and some of those opinions aren’t well researched.

Put another way, your buddy “TrapDatAzz98” on Reddit may claim mastering entirely with UberSmasherizerVST and Beats headphones is just as good as using an actual mastering studio? An actual mastering engineer might point out just how ill-informed that is. TrapDatAzz98 is wrong, of course, but both are just merely that: opinions. And the font is the same size.

With that said. I want to say something about preamps. Ironically, yes, this too is an opinion… my opinion. But it’s informed by my three decades of not only sessioning on every preamp under the sun, but maintaining them and building a few as well. There are so many threads in internet-land about preamps. “What preamp is good for snare?” “What preamp did Steve Albini use on the PJ Harvey record?” “Is the preamp on my $120 interface good for vocals?” They’re all legitimate questions – it’s just unfortunate we can’t say the same for the answers.

If you’re just recently coming into the place where you’re going to start adding one of these magic, all-singing, all-dancing circuits to your arsenal – let’s just get this out of the way:

IT’S NOT AS BIG AS YOU THINK

That’s not to say there’s no difference, or that a John Hardy won’t outclass a Mackie. Just that it’s not so much a “night and day” difference as it is a “dawn and dusk” one.

Yes, there are nuances to one design versus the other. Yes, certain types do lend themselves to certain styles. And yes, lots of professionals have strong opinions on why they cut on this one versus that one. But your recordings will not live or die by this decision – even if your decision is to just stick to the ones on your interface or mixer.

There’s a prevailing wisdom that could lead you to think that certain preamps have a mythical, transformative quality. That everything that passes through their copper-wired halls suddenly, magically, transforms lead into gold. It would be great if it were true  – but sadly it is not.

Will an upgrade help? Yes, having a wider signal-to-noise ratio, or a better response curve is never a bad thing – but that is more felt with recordings that use the same preamp dozens of times over (be it tracking a lot of instruments or using the line amplifiers with a multi-input mixdown). But recording a few vocal tracks and printing an internal 2-track mix yields results that are considerably less obvious.

And lest we forget, a lot of this magic is purely psychosomatic.

Gear Acquisition Syndrome is very pervasive. John Fogerty quipped in Dave Grohl’s “Sound City” documentary that “everything sounds better through a Neve”. Whether it’s a spanking new box, or a shopworn bakelite-and-powder-coat “vintage” circuit in your studio, your heart so wants this to be a dramatic shift that it can trick your ears into making it so.

I’ve spoken with aspiring engineers who, again, describe the results of the VintageCo 5808 or the NowSound 8k as if the preamp’s applying a large amount of equalization, compression or harmonic sweetening. Preamps all have the same stated intent, but the differences are in how they go about getting there. API, with their 2520 discrete op-amps are “the sound of rock and roll”. The much-adored Neve 1073 (which is a pretty darn simple design) employs a 1:2 transformer that helps brings out very pleasing harmonics.

Alternately, designs like those found in the Focusrite Red preamp or the SSL 9000 console lean towards a “wire with gain” philosophy. They’re designed to reproduce the absolute widest dynamic range and flattest frequency response possible – letting the engineer non-destructively rub whatever coloration or dirt he/she wants in production (such as, say, an API or Neve channel strip plugin). And while what you hear right out of the box could be described as “clinical” or “overly clean”, remember that this is the intent. You can make the recording sound like my buddy’s old 4-track later… not so much the other way around.

SO WHAT’S WRONG WITH MINE?

The salesman at GuitarHell, the company’s website and the internet-at-large all told you that the ones on your interface are “studio grade”. Are they? Well, if it has an XLR connection and takes 120v power, I suppose that’s “studio grade” enough to satisfy most people. Keep in mind “studio grade” is just the sort of marketing drivel people get paid WAY more than audio engineers to come up with every day.

But are they… you know… good? Not to answer a question with a question, but what defines “good”? Does what comes out of the speakers sound like what went into the mic? Does it sound “amazing”? “Lifelike”? “Transparent”? “Warm”, “cushy”, “fat”, “vintage”, “modern” or any other nebulous audio buzzword? That’s where it gets vague, and where your ears and your personal taste matter far more.

The ones on your interface would be described by most professionals as “serviceable”. Some of them are pretty great (Apogee’s Ensemble comes to mind), most are okay and a few are just crap and are only on there because the competition has them.

So if you’re still left wondering if scratching the insatiable itch of gearlust with this latest box of wires, lights and knobs will yield better results…

Yes, it can, especially (again) if you’re layering up stacks of vocals or instruments. The point I’m driving at is that they’re not as magical as the internet might have you believe. I’d hate for you to drop $3000 on a Neve Portico, plug it in and be left suddenly saying, “wait, where’s the magic? This just sounds like the microphone input on my Shenjing HappyBuddy USB”!

Given the choice between a better mic and a better preamp? Get the microphone – your preamp is only as good as what you feed it. Choosing between a better preamp and better monitors? Get the monitors. You can’t appreciate the difference of the quality preamp without being able to hear it. But as a part of this complete, nutritious breakfast? Yes, having a good preamp or two will help. Just don’t expect any miracles – the awesomeness has to come out of you first.