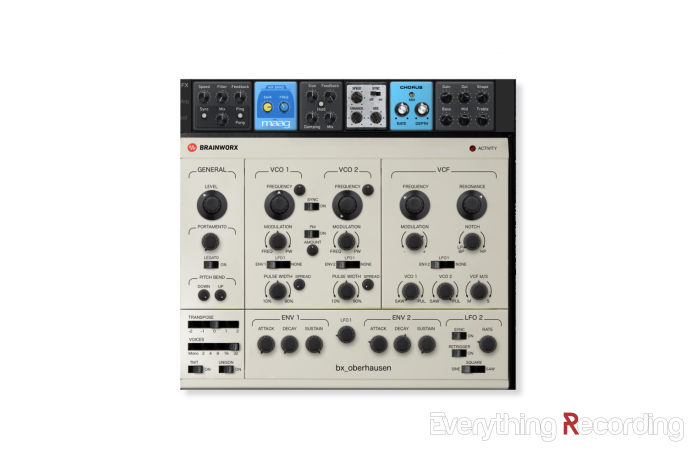 In our review of Arturia’s 3 Compressors You’ll Actually Use, you see the typical transition of a virtual instrument company moving into the plugin space. Brainworx is going in the opposite direction by being a plugin company venturing into soft-synths. This unique perspective and countless incredible models of analog processors brings a different outlook as well as an arsenal of processing plugins to integrate. But is it enough to take on heavy hitters already in the virtual instrument arena? Let’s find out.

Ah, the synth of my youth. Oberheim Electronics defined the sound of the ’70s and continues to make a big comeback in modern music. This synth has an extraordinary place in my heart. Growing up, my dad and his best friend would spend almost every Friday night in his friend’s home studio. This was back in the day where home studios were as uncommon as owning more than one analog synth.

Nevertheless, dad’s friend had quite a few different synths as well as a Rhodes. Out of all of the different toys in that studio, I especially loved the Oberheim SEM (Synthesizer Expander Module), with its massive stacked pads and warm buzzing leads. This affinity is partially due to the unintimidating nature and sheer versatility of the controls. The 9-year-old version of this writer could turn knobs and get some fun sounds.

It seems Brainworx had an affinity for these units as well, given their first foray into virtual instruments pays homage to the Oberheim name. The bx_oberhausen borrows heavily from the Oberheim SEM, all while adding a bevy of features that players in the ’70s could only dream of. What makes this such a great synth to kick off the Brainworx virtual instrument line is the simplicity of integrating the Oberheim controls into the interface. There’s not a massive array of knobs and buttons like modern synths, but a ton of functionality and versatility.

The interface divides itself into six sections: The Main, Effects, Arpeggiator, Modulation, Preset Management, and Midi Learn / Toolbar Sections. While all of those sections seem daunting, Brainworx thought out the interface masterfully. The most used parts can stay prominently featured while others can pop up very quickly. bx_oberhausen accomplishes organization by keeping the Main Section visible and integrating a tabbed top section for effects, arpeggiator, and modulation control.

The Main section is very similar to the original SEM unit with 2 VCOs, Envelope controllers, and VCF. Of course, Brainworx didn’t stop there. Each area of the main section is loaded with new tricks to bring this synth into the DAW age. The General section adds a master level knob to wrangle those gain increases that occur when you turn controls up. This feature allowed bx_oberhausen to maintain its original “quirky” nature while you preserve your hearing when switching between presets.

Portamento and Legato have also been added to custom tune those glide transitions between notes. Legato is especially useful when you want the chords to glide but not the lead, thus saving you from creating two patches – one for the chords and the other for the lead. Another handy tool is the dual Pitch Bend knobs that allow for the ranges for pitch up and down for independent control. The Transpose control, although a simple tool, is probably one of my favorite for this synth. People who use more compact key controllers will love the ability to raise or drop the synth up to two octaves with a single click.

Voices, TMT, and Unison all work together and deserve their section of the review. Brainworx has taken a fascinating approach to voices in bx_oberhausen. Where the synths of old usually came in mono form due to the complexity of circuits and components, many people would “daisy-chain” several mono synths to get a fatter sound. bx_oberhausen has taken this limitation in analog synths and made it a strength.

TMT is Brainworx Tolerance Modeling Technology. This form of hardware emulation goes beyond the typical plugin topology. While it does emulate analog gear, it goes beyond just emulation. This technology is what sets the bx_console (review here) apart from its competition. Instead of just modeling one channel of a piece of gear, each component was modeled, and “tolerances” for specific internal components were baselined. After all, these small derivations in analog components are what make some pieces of hardware “magic” compared to others of the same type.

Taking that same approach, Brainworx used TMT to add subtle variations in each voice of the synth. With TMT enabled, each note of a chord has its mono synth with its unique analog imprint playing that note – resulting in a richer “beyond” analog sound. The Unison switch combined with TMT goes even further. Each voice-enabled via the Voices switch becomes its very own mono synth, each with slight variances in the emulation. Crank the voices switch to 32, turn on TMT and Unison, and suddenly 32 unique instances of bx_oberhausen are playing the same note. The result is this super thick lead that sounds like a swarm of synths all trying to escape the speakers. It’s seriously unique. Be warned, the amount of processing to make this happen will test your computer’s resources.

bx_oberhausen’s VCO’s have been enhanced as well with more control over each VCO’s frequency parameters. Instead of having just control over the semitones of the VCO, bx_oberhausen has a Finetune control that can adjust in cents up to a whole semitone. Since Brainworx is the king of Mid / Side processing, bx_oberhausen gives complete reign over the stereo field with unique controls. Each VCO has a Spread control, which adjusts the stereo width of each filter in the stereo field. Combine that with the VCF Mid-Side control and new possibilities can be explored in relation to where in the stereo field the filter is prominently featured. One VCO can be in the midfield while the other can be on the sides. Very quickly, sounds can morph into all-new patches by turning these three knobs.

Although all of these added controls are a vast improvement in itself, Brainworx had more in mind. Because they have specialized in countless award-winning plugins, a full-on arsenal of effects and processors were at their disposal. Since the original SEM commonly interfaces to different stomp pedals and effects, why not do the same in the plugin space? Inside the FX section across the top menu are six miniature versions of some of Brainworx’s most popular plugins. Each can be turned on and off and individually dragged in any combination. A Digital Delay, Reverb, Chorus, Flanger, Amp Emulator, and the Air Band from the Maag EQ are available to use. Each has catered controls for the application tailored for use with this synth.

No synth would be complete without an arpeggiator, and bx_oberhausen packs all of the needed patterns and controls in one easy-to-use interface. The hold function is especially useful by allowing each note played to stay in the arpeggio even when released. The hold can pair with a sustain pedal for further experimentation. A clock allows for the speed of the arpeggiator to be adjusted, complete with triplets, dotted noted, and even a swing control.

A modulation section places all controls for assigning different sources in one window. Users can choose between Modulation Wheel, Pitch Bend, ENV 1, ENV2, LFO1, LFO2, Velocity, After-Touch, and Keyfollow. Note: The Oscillator in the Modulation Section can modulate the same destinations as the Main section. Anything you do in this section works in addition to the other. While this can get confusing, it can open up new possibilities for creative movement in sounds. Each modulation slot in the Modulation Section has control over the curve and the amount. 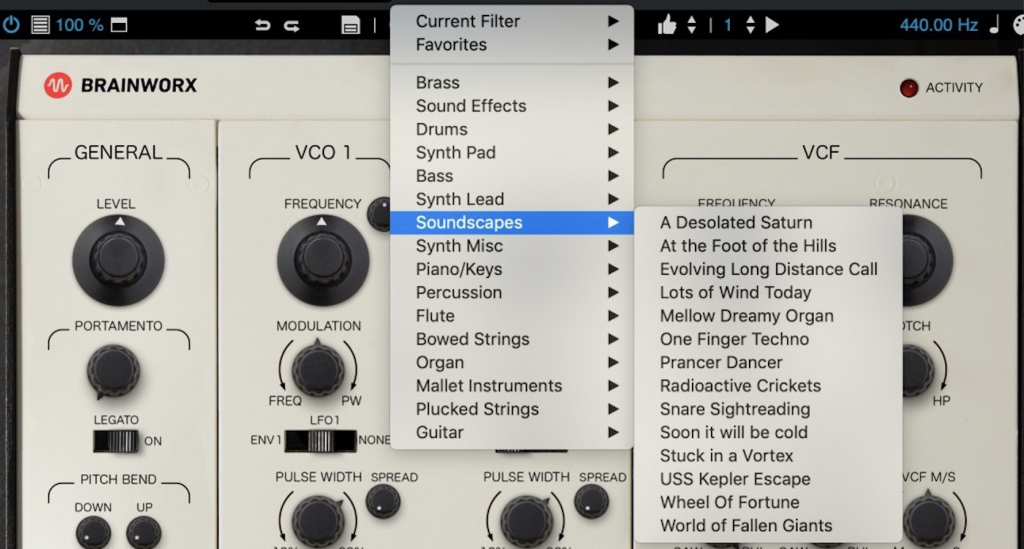 Lastly, across the top is the toolbar, complete with an in-plugin bypass, preset manager, window resizing, undo/redo, panic button, and MIDI Learn. With this control, oberhausen assigns any function to a MIDI CC from a hardware controller. Assigning is as easy as clicking a control. Color codes show which controls are mapped (in green) and which are not (blue). Once you assign all controls, you can save presets either within the same preset or as a file you can use with other presets as well. If things get out of hand, the trash can icon at the top clears all at once.

I’m just going to come out and say it. This Soft-Synth is fantastic. You can tell Brainwork placed a lot of thought into making bx_oberhausen. Sonically, it takes a unit that other manufacturers emulate and pushes it to new heights. All controls are arranged perfectly. I never once found myself hesitating to find a function or control. Even down to the small things like the Transpose, Fine-Tuned Frequency controls on the VCO, and the Pitch Bend range make this a no brainer. The effects section is a perfect example of what more virtual instrument developers need to incorporate in the interface, and the Mid/Side controls put this unit in its category. Who knew three knobs could transform sound so immensely?

Even if sound design isn’t your thing, bx_oberhausen has you covered with a slew of incredible presets. The preset section organizes each categorized by Type, Sub-Type, and Modes, making recall simple. You can also add favorites for quick reference. All of the classic sounds of the SEM are available directly from the presets, enabling fast and straightforward jump points from existing settings.

Overall, bx_oberhausen is a powerhouse of a synth. This soft-synth pushes the SEM to new levels of creativity with its added controls, effects, and Mid/Side controls. The textures the Mid/Side controls creates is spectacular. Add in different combinations and arrangements of effects, and new possibilities open up. You truly have to try it to believe it.

Although this rendition of the SEM stands out, there are a couple of things I would have liked to see incorporated into bx_oberhausen. In the effects section, I really would have liked to see a small EQ added. This feature could be in the form of a new module or just the ability to bypass the amp simulation and use only the EQ in that module. Of course, this can be remedied easily by adding another insert in the DAW or Sequencer, but I would have liked it to be in the bx_oberhausen interface. I also would have liked a sub-oscillator added to fatten up the already big low-end. A combination of a sub-oscillator with unison would render some exciting leads. Other than those enhancements, bx_oberhausen is pretty much as good as it gets.

For being the first synth Brainworx released, bx_oberhausen is a home run. Everything you need to relive the past or define the future is right at your fingertips. bx_oberahusen has masterfully recreated a classic while carefully adding features that are indispensable in a soft-synth. I’m excited to see what they do next.