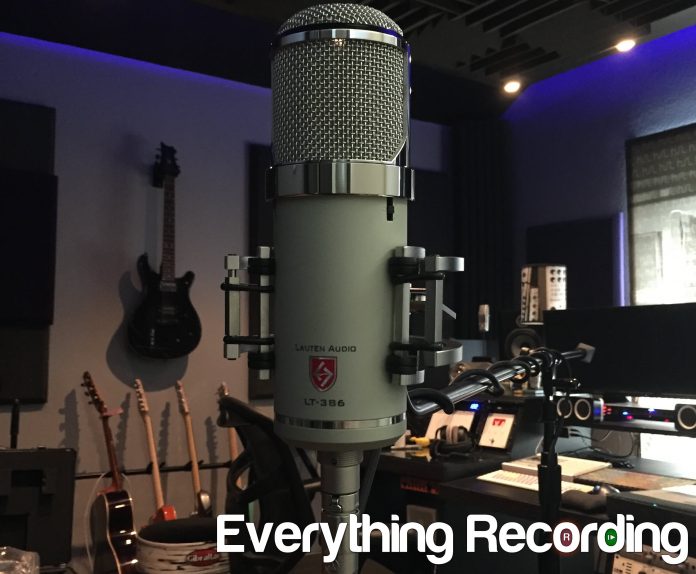 Lauten first caught my eye / ear when they released a microphone called Atlantis. This microphone promised to tackle any type of vocalist through its trademarked “multi voicing system”. This is achieved using a switch on the microphone that physically changed the signal path in the microphone to alter the overall frequency response of the mic. I loved this idea but never got around to testing the Atlantis. But not too long ago, Lauten released an even more impressive specimen – the LT-386, codename, the Eden, which is an even more hot rodded tube microphone that can do what Atlantis did and more. The concept is utopian for an engineer to have “one mic to rule them all” so when Lauten gave me a chance to actually test out the Eden, I was more than up for the challenge.

Let’s get right to it. This mic looks good. Perfect vintage inspired color with brushed nickel and chrome in all the right places. To bring it to the modern era, a semi-permanent shock mount wraps around the back to give the mic a distinct contemporary vibe as well. It is built to last as well weighing in around 8lbs. The flat black carrying case adds even more style to the mix. Walk into a studio with this case, people are going to look – open the case, and heads will turn. Everything about the look of this mic says “I mean business, and I’m going to look good while doing it.”

Eden is a tube mic custom designed from the ground up. Nothing is ordinary about how this mic was made. The multi-voicing feature shapes frequencies using 3 completely separate signal paths, the transformer is custom wound, and the EF806S tube is burnt in from the factory using a process only Lauten knows. Even the mic cable that goes from the very compact power supply looks like an old mic cable from the 40’s. The only thing remotely standard about the mic is the 3 polar patterns, which along with the multi-voicing and filter switches, are actually on the mic. As much as the artist may like it, no more having to lay prostate on the floor like you are worshiping the lead singer to change from omni to cardioid on the power supply. The only issue with the switches is where they placed the multi-voicing switch. This switch is located on the back of the mic. Usually this wouldn’t be a problem but the solid halo shock mount makes it a little tough to make changes, and you’re going to want to be making changes to this switch. It would have almost been better if the polarity switch was on the back because the filter and multi-voicing switches get way more use.

While we’re on the functionality topic, the weight and shock mount issues need to be addressed. Like was stated before, this mic is heavy. Forget using a normal boom stand unless the boom is going to be almost completely retracted. If any lever arm offset is going to be used, a counter weighted stand MUST be used. The only one I had in my studio is an Atlas stand, which takes up a ton of room. If square footage is your enemy, you might want to invest in a short compact weighted stand with very heavy duty clamps, or in the least some sort of bolt on counterweight. A few companies make these and a quick Google search will bring up a few options. I would suggest a 6-pound counterweight.

The other issue that compounds with weight is the design of the shock mount. Don’t get me wrong, the mount is solid and sexy, and I personally love the fact that I can pull the mic out of the box and just mount it. It definitely gives a warm fuzzy feeling that nothing short of a baseball bat to the head basket is going to break the mic, but there are instances where it is tough to get the mic right where you need it. Since the mic is locked in a permanent position, there is no rotating the mic inside the shock mount unless you physically turn the whole mic stand, which if you are boomed out, means you have to pick up the entire mic stand and move it just to dial in that sweet spot on an acoustic guitar. There is also pretty much no rotating slightly on its side because most mic stands can’t clamp hard enough for the weight. A little pre-planning and ingenuity can fix that and in most cases, the only positions needed are either straight up with a tilt forward or capsule down. I will say the clamp and hardware on the shock mount that allows for tilting could withstand a nuclear blast. The clasp also swivels, making tightening a breeze. In summation, 90% of the time either of these problems will not be concerns. As you work with the mic more, workarounds will be found.

I think it has been very established that this mic is beautiful and has a few small ergonomic issues…Nobody’s Perfect right? In pure aesthetic design (which is becoming more and more important in this age of studio Instagram likes) this mic is a 10 – an instant classic. But as life has taught us,  looks can be deceiving. I mean, look at supermodels. They are gorgeous, but when some of them open their mouths to say something… pure disappointment. It is a rare thing to find brains and beauty in this world, but is it possible we have a diamond in the rough here?

On paper we most certainly do. The multi-voicing features 3 modes: Forward, Neutral, and Gentle. These are based similarly on the modes in the Atlantis but are not exactly the same. Lauten kept this naming convention for consistency’s sake. Think of these settings on this mic more as Gentle being vintage, Forward being modern, and Neutral a mix of the two. The Gentle setting gives a nice round, warm sound with buttery highs reminiscent of old Telefunken mics. This setting was the main reason I was intrigued by this mic due to my continual obsession with the U47. The Forward setting gives a top sheen and presence, similar to those in glossy pop tracks in today’s Top 40. The Neutral setting takes the ideal parts of these two settings and molds them together, bringing a “best of both worlds” approach to a mic.

If that in itself wasn’t enough to make this mic appealing, Eden features two stages of high pass filtering, the naming of which will perk up many reader’s ears: Stage 1: Kick Shaper and Stage 2: Vocal Shaper. Obviously, the first Flat setting has no affect on the signal path, but the other two serve really broad purposes. Stage 1: Kick Shaper features a very steep cut to tame the unwanted rumble and boom that usually does more harm to a kick drum than good. Stage 2: Vocal Shaper is made to fix problem areas in a vocal to leave just what you want to hear. These filters do not just serve one purpose. Different sources can benefit from each in different ways.

All of these features seem too good to be true right? Well, it’s not. I can honestly say even with all of the claims Lauten made about the Eden, they undersold it. This mic is phenomenal. The differences in the three modes are not subtle, they are very apparent. Add in the two stages of filters and Eden changes even more. Say hello to the new “desert island mic”. This can be said with complete confidence because I put Eden through the ringer during testing. Give me a pair of these and I can record full albums.

Need proof? I recorded an entire song using Eden on almost every instrument. The only instrument that needed other mics was drums, but I still placed Eden at the body of the kick drum and only used my pair of JJ U87s very lightly for a stereo picture of the drums. I still leaned very heavily on the Eden to capture the overall picture of the drums. Over 90% of the song below was tracked with Eden and a Millennia preamp. I chose the Millennia due to its transparent sound as to allow Eden to do the heavy lifting and shine on its own. I had a Gibson J45 True Vintage that eats mics for breakfast on the low end and Kick Shaper and Forward mode solved that with very little EQ during mix. Actually very little processing was used in the whole mix. For vocals, Gentle mode with Vocal Shaper was used on lead vocals and Forward mode with Vocal Shaper added just the right amount of air. As you can hear, the vocals have great density and sit right where they need to in the mix. Even all shakers, tambourine, and piano were tracked using Eden. The only instrument that didn’t get the Eden on it was bass due to it being run direct into the preamp.

The only issue I ran into was tracking electric guitar. The amp needed to be turned down very low due to no pad on the mic. I really wish Lauten would have added that to the mic, but once levels were set on the amp, Eden took over, capturing the tone perfectly. As you can see on the track, each instrument has a wide diversity of tone due to the Multi Voicing and 2 stages of filtering.
Sure the price is a little higher than the average project studio budget, but look at what you are getting – 3 voicings and 3 different stages of filtering that almost acts as an EQ. That’s essentially 9 different sounding mics. That’s $277.00 per setting… the price of a low end mic. Eden is an entire mic locker in one extremely sexy package. Did we find a diamond in the rough that features both beauty and brains? This reviewer certainly things so.