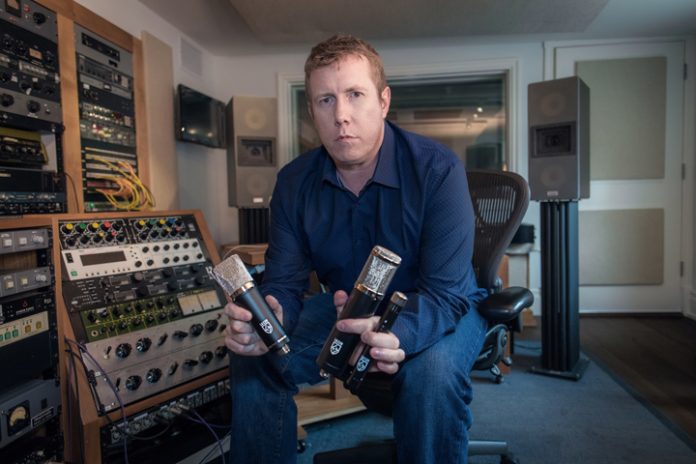 Recently, Lauten has been featured heavily in use on the new Foo Fighters. I only mention this because if it’s good enough for the Foo’s, then it’s good enough for any of us. Some of the mics used were even from their Series Black line of more budget friendly but still professional grade microphones. Also featured was the Laten Eden which we reviewed not too long ago where we used the Eden on 90% of the tracks on a song.
We were blown away by the quality and versatility of the Eden and were not surprised to find out it was used by the great Darrell Thorp.

San Jose, CA – Sept 19, 2017 – Engineer Darrell Thorp recently recorded the Foo Fighters new album at EastWest Studios in Los Angeles and chose to use loads of Lauten Audio microphones, including the Atlantis, Eden, Clarion, and the new Series Black LA-120, LA-220, and LA-320. The new Foo Fighters album “Concrete and Gold” (Roswell Records/RCA Records) was released on September 15, its first single, “Run,” hit the top 10 on the Rock Airplay Billboard charts in June. “We had a massive setup for recording the band,” says Thorp, “part of the challenge was we had 4 drum kits set up at once, a bass station, vocals, keys with 2 keyboards and pianos, and over 20 guitar amps, some in the live room and some in Iso-booths – I was using a lot of Lauten Audio mics.”
Discussing how and where some of the different mics were used, he explains, “For a sonic clarity difference I was having all the background vocals recorded on the Lauten Audio Eden mic, it’s a bit of a sweeter sounding mic, and I was using the ‘Forward’ switch so they would always sound breathy, and open and airy, around the lead vocal.”
“On the song ‘Happy Ever After’ which is the quietist, most acoustic track on the record, Dave Grohl was playing this Harmony solid body acoustic guitar, which is super quiet, but it has a ‘sound’ – so I grabbed a Lauten Audio Atlantis mic and switched on the +10 dB gain switch – which is genius!” exclaims Thorp. “I was barely rocking my mic pre, so I had plenty of level to Pro Tools and I was able to get a really good guitar sound. I was also using the Atlantis and LA-320 on guitar amps a lot, sometimes the LA-320 was on room guitar amps as well at about 15 to 20 feet from where the amps would sit in Studio One at EastWest – the room is huge and sounds amazing.”
The Series Black LA-220 mics were used for some of the main tom mics says Thorp, “They were amazing, they worked so well. I used the LA-220s on the Gretsch ‘George Lake’ kit with a 13-inch rack tom and a 16-inch floor tom.”
Thorp concludes, “I really do stand behind the Lauten Audio mics, I use the products a lot! I’m not just a face on an ad and a face on the website. We just did a Foo Fighters BBC Live session and I took an Eden for a mono overhead on the drums, which sounded great. I use the mics all the time when recording!”
Darrell Thorp is a seven-time Grammy® Award winning producer, mixer, and engineer (Foo Fighters, Radiohead, Switchfoot, Molotov, Beck), with over 20 years experience and many multi-platinum records on his discography. Thorp moved to Los Angles in 1997 after a 4-year service in the U.S. Navy and started interning at smaller studios, and eventually worked his way up to an Assistant Engineer at some of L.A.’s prestigious studios such as Track Record, Conway, and finally Ocean Way Recording. He recently had the pleasure of recording and mixing the new Foo Fighters album “Concrete and Gold,” and also engineering the new Beck record “Colors”.