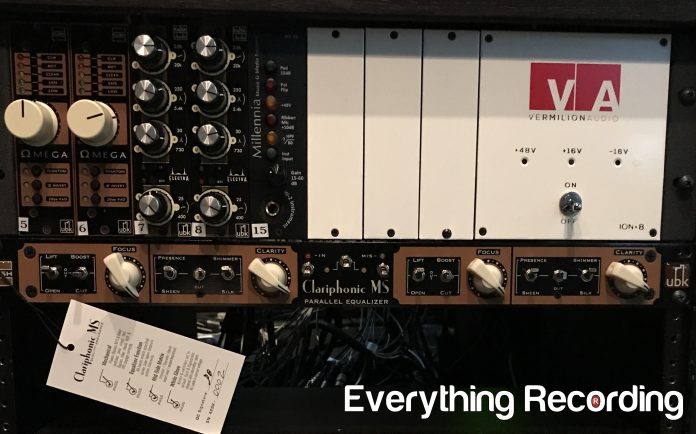 We’ve seen the Clariphonic grow in a unique hardware / software evolution, whereby the hardware inspires the creation of a plugin and the software pushes the envelope to consider new features for the hardware. Which is where we end up in this review. Now Kush has completed the circle (and then some) by updating the analog hardware to include a new feature previously only found in the Clariphonic MkII plugin: Mid/Side processing.

OVERVIEW:
For the few of you who may not know about the Clariphonic, here is a brief overview. This piece of hardware is a stereo parallel high shelving EQ that essentially has 3 channels of audio routed through it: your original source material untouched, and two more channels (or engines) that contain different EQ circuits. The Engines are divided into two sections (Focus Engine and Clarity Engine) and adjustments can be made to either or both of these two engines and all summed back in with your source audio to the output. No crazy bussing has to be done on your part. It’s all handled internally. The Focus Engine deals with audio starting at 800Hz and ending around 14kHz, the Clarity Engine picks up at 4kHz and ends somewhere past 34kHz. Each engine is controlled with switches and a knob, all of which are labeled in descriptions, not numbers. This is indicative of Kush gear given creator Gregory Scott’s mantra of “let your ears do this mixing, not the eyes”. Since this is a stereo unit, the left and the right independently have their own sets of engines. Operation is pretty simple from there, turn the switches to the description that most suits your wants for the track and turn the knob until you hear the right amount.

DIFFERENCES:
Up until recently, we had the hardware version and the software version. The hardware and software were pretty much exact, containing the same engines and controls, with the only difference being that the plugin version had Mid / Side capability. In past episodes of UBK Happy Funtime Hour, Gregory Scott admittedly mentioned that he did not often employ Mid / Side techniques in his own day to day mixing and added the feature to the Clariphonic by request. But once added, he saw its worth and felt the hardware could benefit from this approach. Therefore, the hardware unit in today’s review was created, complete with Mid / Side and another equally useful trick – a cut knob to the focus engine. This did however come with a price: the Tight and Diffuse bands were removed from the Focus Engine to make space for the boost and cut toggle switch. So, if you own the MkI hardware unit and love the Tight or Diffuse settings, you may want to hang onto the MkI or use the plugin (more on that later). With the differences out of the way, we can delve into the new model and see just what warranted a new piece of gear to be created and if you’ll want to buy it.

MID / SIDE
Let’s start with Mid / Side. For those newer to the game, Mid / Side is a technique that takes a stereo signal and instead of employing a left and right side, audio is dealt with by separating the audio in the center of the stereo field (mid) from the audio on the left and right (sides). This separation allows the edges of your stereo signal to be impacted separately from the center. Using this feature, a stereo track can appear to sound even wider when high frequencies are boosted just on the sides and density can be added by compressing the middle differently than the sides. The Clariphonic MS was completely reconstructed with a very complicated signal routing matrix to accomplish Mid / Side capabilities. What sets this apart from the herd is that inserts have been added to the back that allow other gear to be respectively patched into the mid or side, thereby giving preamps, compressors, and other pieces of hardware the very same mid / side capabilities. This gives way to endless creative options. Different combinations of hardware preamps, EQs, saturation, and compression can be used across the mid and side inserts. For instance, a Neve preamp can be driven into a Tweaker on the mid insert with the Open engine boosted for some extra dirt and presence and sides can be sweetened with a boost of the Shimmer to bring some spread to the mix. The world is your oyster. You won’t look at the gear in your current rack the same again.

CUTS LIKE A KNIFE
Up until the MS model of the Clariphonic, the only option was to boost filters, which in itself was more than enough; but there is something about a wide cut combined with a nearby boost that sweetens the impact of the boost even more (think Pultec EQ). Given the complex nature of all of the different routing and summing stages, this feat proved extremely difficult to accomplish but after quite some time of wrestling with the concept, the cut knob was forged. Flipping the Boost knob to Cut inverts the knob for the focus engine, allowing for harsh mixes to get the tape treatment, by softening the selected Lift of Focus band. Employing this with Mid / Side pushes the limits of this piece of gear to astronomical proportions. By actually cutting the Focus engine, the Clarity engine can shine and shimmer even more.

IN OPERATION
Seeing as like most of you reading, I’m more familiar with the plugin version, I had quite the eye-opening experience with the Clariphonic MS. Having the two side by side, I was able to compare the same settings on both to hear how each version handled audio. Even though they both essentially accomplished the same feat, the outcome on both were distinctly different. The hardware felt more dimensional, like the boosts were moving both upwards and outwards from the speakers. This is not to say the plugin version is worse – just different. This is often said of professionals who own both software and hardware versions of gear but until having both in my hands, I didn’t quite understand. There is a sweetness and slight forgiveness to heavier boosts and cuts with the hardware.

The Cut feature is a hugely welcome bonus to this already great piece of gear. I found myself using one of the left and right channels in combination with my Omega Preamp and Electra EQ especially on acoustic tracks to first establish lows with the Electra, cut the Focus engine and boost the silk. This combination can easily rival any Pultec setting. Also, using the cut on Electric guitar busses helped tame the harshness that comes with biting overdrive. There pretty much isn’t a track that won’t benefit from the Clariphonic’s pristine boosts, but boosting does come with a warning. Out of the gate, the “expensive” sound that is achieved by boosting top frequencies can be addictive but a night’s sleep and reopening the session can be the best gauge when learning balance with the Clariphonic. Usually it is best to boost in small amounts and even dial back slightly once you feel the perfect boost or cut is achieved. Other than over-boosting at first and losing the Tight and Diffuse settings from the Focus engine, The Clariphonic M/S clearly warrants upgrading from the MkI or initially purchasing. I pretty much ran every piece of hardware I own through the Clariphonic MS. My favorite by far is a Universal Audio LA610 and boost in Open in the Mid and an Omega / Electra on this sides with slight boost of Shimmer and a cut of Open.  With the Clariphonic MS, having the Mid / Side mode inserts give the ease of routing plugins in a DAW to the real world and really deserves consideration even if just based on that function alone. Leave it to UBK to take a piece of gear, create a plugin out of it, upgrade the plugin, then go back and upgrade the hardware. Now if I can just get the cut knob on the plugin, we can keep this cycle going.

For more information on the Clariphonic MS, visit http://www.TheHouseofKush.com