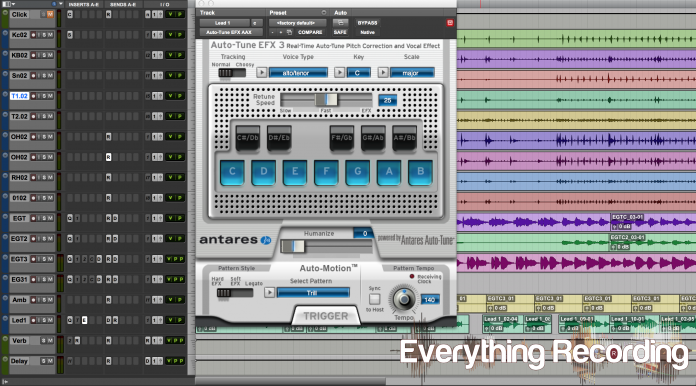 No need to introduce this one. This product has made its way into pop culture nomenclature and has been responsible for more television reality stars’ music careers than just about any network executive. You’ve guessed it, we’re dealing with Antares Auto-Tune. Although a lot of people have blamed this tool on the decline of music, I feel that Antares isn’t even a fraction as liable as the public believes they are. It is the overuse of the tool by individuals that has given Antares the bad rap. I don’t see people blaming Paul Mitchell for all these obnoxious faux-hawks, so why blame Auto-Tune. There have been plenty of examples of this plugin being used for extremely innovative projects. We’ve all seen the Double Rainbow video… I mean… c’mon.

Auto-Tune EFX 3 is obviously Antares’ third revision of the lighter version of the full blown AutoTune7 software. It is a scaled back version that can be used in either live or post environments and acts more as tool for either polishing vocal tracks’ pitch or as an effect. I’ve owned Auto-Tune EFX 2 and found it to be used more as an “autopilot” effect based plugin, but EFX 3 seems to have improvements and more controls. It has also included an AAX64 version to move it on up to ProTools 11 standards.

Let’s start with the improvements. Instead of just having a slider bar that lets you chose between 3 choices of pitch correction, Antares have added 2 slider bars that allow you to fine tune the exact amount of correction across the track. The “Retune Speed” is responsible for how subtle or verbose the correction attack and tune algorithm works and the “Humanize” slider adds a little leeway in the long notes, giving you more natural variation of pitch drift in longer notes.

Another fun feature that came about in EFX 2 was the Auto-Motion bar across the bottom that offers selectable scales and patterns, that when triggered, retune the signal in a rhythmic pattern. This was one of my favorite things to use in the studio when fatigue would set in on a session and the vocalist needed a little jolt. Just throw an arpeggio in the pattern selector and press the trigger button, and on a nice long note, your vocalist will get a nice surprise. Perfect for those times when you need to keep someone on their toes. In a more professional use, it is perfect for synth leads and even guitar solos (try it). EFX 3 carries over EFX 2’s Auto-Motion pattern editing with any software that allows editing of MusicXML files. Editing the patterns are fairly straight-forward but just be careful placing files into the database lest you overwrite all of the stock patterns Auto-Tune supplies. This can add movement to background tracks in limitless scale and rhythmic possibilities.

It’s a very easy to use program that does most of the work for you. I will say the performance of the pitch correction actually is a big improvement from EFX 2. I found with EFX 2, I used it more for that “poppy” sounding hard tune effect; but with EFX 3, I was frequently using it on vocalist who didn’t need Melodyne. Sometimes I would even do a fast Melodyne edit on vocal tracks and let Antares take control of the drift and attack settings. They actually pair quite nicely and now that the pitch correction algorithm is improved, it works as a great subtle polishing tool. One thing I wish they would add to the Auto-Motion pattern is the ability to harmonize the pattern, giving you a rhythmic “background harmony” track. EDM music would take full advantage of that feature, but for now, it’s easy enough to scale the single note in Auto-Motion and put it back into AutoTune7 or Melodyne and create harmonies from there.

Overall, I find EFX 3 to be a vast improvement over EFX 2 and well worth the upgrade. Getting AAX-64 lets you move into Pro Tools 11, editing your Auto-Motion gives you added creative use, and the improved pitch correction settings make subtle editing a breeze. If you’re looking for the ultimate in pitch correction “cruise control,” you’ve come to the right place. A word of advice would be to use it creatively so as not to have more people sending hate mail to Antares for “faux hawk” music.
For more information and to purchase visit http://www.antarestech.com/products/detail.php?product=Auto-Tune_EFX_3_65