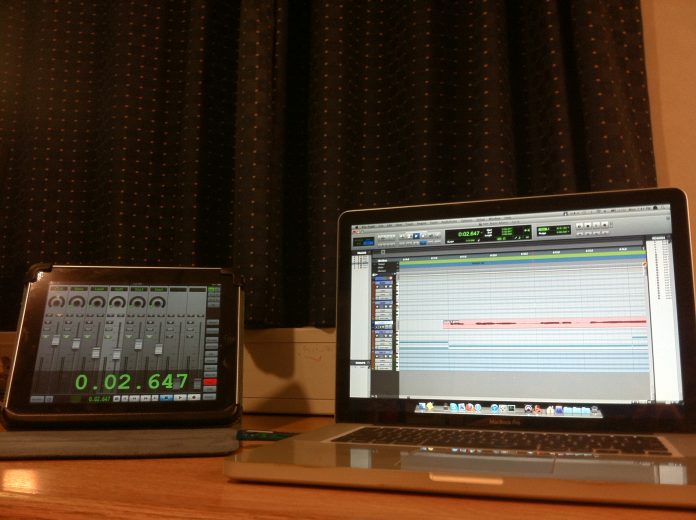 I’ve been slowly working on building a full production studio. Right now I’m in the process of mapping it all out and setting up the layout. There’s been one big question that has plagued the whole process of setting up a multi-room studio: Whose going to press the “Record Button” for me when I’m laying down drum tracks in the live room? Sure, if there’s someone hanging out, they can hit the button, but I might have to do multiple takes and my friend’s attention span is that of an untrained Labradoodle; so they’re not going to want to sit there while I’m throwing drumsticks across the room and weeping like a girl over my lack of talent yelling for them to start the track over. I’ve priced a few remote units for my 003 but nothing ever really did what I needed. Along comes the Neyrinck V-Control Pro. Now I have to admit, running a site has it’s perks and Neyrinck gave me a run at the software and I have to say, I absolutely love it.

When I first read about this unveiling at AES and I was pumped, and shortly thereafter, I stopped over at Neyrinck’s Website and looked at some of their other products they had (which were extremely impressive); but I left the site with a heavy heart. Almost all of the products were sporting a fairly great sized price tag… I mean… I’m still going to buy it because having this software work remotely on an iPad was worth it, but nonetheless, its tough spending a few hundred dollars for anything in this economy.

Sure enough a week or so passes and I get a press release sent to the site. Its out and there’s two versions V-Control is $19.99 and Pro is $49.99. I’m ecstatic, jumping around my living room like someone threw ice down my PJs (which shortly after I realize my friends did at that exact moment, strange coincidence.) So I say all of this to basically explain this software is worth easily five times what you pay for it (just please don’t get any ideas Neyrinck. We like you because you’re cool enough to give it to us at this price.)

Here We Go:
First and foremost, this program uses Wi-Fi to run so you will need a router (which you probably already have) and both the iPad and the host computer connected to. This is how the two communicate. The install is very easy. Like any iPad app, you simply buy it and it downloads and installs. The somewhat tricky part is in the setup with Pro Tools. Just so you know, right now there’s only a Mac OS X version and this only works with Pro Tools, but there is a version coming out in the future for Windows as well.

The first thing to do is download and install the Ney Fi Utility for the host computer (link HERE. Just fill out the info and select Mac and go.) Once the program is installed, run it. This is the bridge from your host computer to the iPad. Now make sure both computer and iPad are connected to Wi-Fi and open the V-Control App on the iPad.

Upon opening V-Control, you will see a very similar looking interface. It basically looks like a slightly sleeker version of the mix window of your Pro Tools with a few slight changes. There’s not much at all you can do with it because its not connected into Pro Tools as of yet, so this makes the what to do next kind of confusing. I wish they would develop some sort of indicator where to start for setup, but that’s a minor detail because honestly, if you’re using Pro Tools, odds are you’re gonna figure out what to do fairly quick.

After a few seconds of looking it over you’ll see the cog at the bottom left hand corner and you’ll click it. From there, setup couldn’t be easier. They spell it out for you as soon as you open the settings. I even made one of my friends who knows nothing about any of this set it up and he said there was no issue for him at all and he JUST learned how to text not too long ago.

Smooth Operator:
Once you follow the setup and have everything connected, this program springs to life. The air feels more fresh, your in-laws are more pleasant to be around, the world just feels… right and you press that play button and BAM, if by some form of digital sorcery, your session is playing from the other computer. I’ll have to be honest with you, I called a few friends into the mix room, cranked the monitors, ran out before they got in, and as soon as they were in there pressed play from the V-Control. Sure I got the crap beat out of me but after they were all out of flatulence and were tired from pinning me down, they were amazed too. And not only does this program just press play and record for you. You have almost every necessary function needed to mix, including tweaking plug-ins.

I tried virtually every plug-in a have and almost every one of them worked flawlessly. Its seriously like having a $1300 Euphonix MC Controller, but even easier to use. The interface is extremely comprehensive. If you know Pro Tools, you know this program. Its that easy to learn. One of the greatest parts is that with a simple two finger swipe, you can go from one set of eight channels, to the next eight in line. You can even pick which eight are in a group. No set groupings of eight, if you want channels 1-8, cool. If you want channels 4-12, go for it. The world is your oyster.

So basically we’ve got everything you could possibly ever want in this easy to use program right? Verrrrry close but it lacks one function that I’ve been told by Neyrinck that is a limitation in the interfaces protocol. You can’t add pre-roll or post-roll from the program. Its not really a huge deal, but it would make it easier to set up on the fly from the V-Control when you need your hands on the instrument, but that’s something you can do from Pro Tools before you go into another room to track you lazy dolt. Honestly, it’s the only thing keeping this from being sheer perfection, and you know what, it isn’t that bad. The fact that the software has NEVER crashed on me makes up for that by leaps and bounds. I don’t know how they did it but they made a program that’s more stable than Pro Tools, FOR Pro Tools. Maybe Avid should hire them out to fix some of the bugs in their system.

Different Strokes for Different Folks:
There are a few key differences from the Pro version and the Standard. The standard version ($19.99) gives you the basic controls like access to faders, pan, transport, auto input monitoring, and memory locations. This is great if you’re basically just wanting a scaled back controller for remotely tracking, but if you’re wanting the real deal where you can basically sit in the live room and tweak your mix from behind the drum set, then you’re going to want pro ($49.99). I mean COME ON… its just $30.00 more and you can automate, have access to shuttle / scrub controls, adjust sends, and even TWEAK YOUR PLUG-INS just to name a few. You even get the number keypad as a slide out feature for all of those handy shortcuts.

I honestly can’t believe they just charge THIRTY FREAKIN DOLLARS EXTRA FOR IT. Seriously, if you buy the standard version over the pro for that price, you should be drug into the streets, tied to a post and have school children pelt you with anything their little arms can throw. Its THAT great of a deal for extr…..
Wait a minute – who are you and whats with the monacle and sweet mustache?
The site’s lawyer you say?…. ohh… oh… OHH

I’ve been informed that I need to stress that NO ONE take anyone out in the streets and allow someone to be subject to violence. It was an expression and I do not want my name or this incredible company’s name associated with domestic abuse.
How was that? Good… Now I have to ask you sir, HOW did you get that mustache so pointy. What in the world is Dapper Dan?
ANYWAYS…

In Summary:
This program is astounding as is the technical support. I sent them a support request asking several questions and was answered back within 45 minutes by an actual human. All of my questions were answered in the best possible manner and were extremely descriptive. Another thing that amazes me is that this is just the first version released. The simple fact that this is just the first version put out, and its so stable and flawless in operation is nothing less than amazing. This proves this company has nowhere to go but up from here.