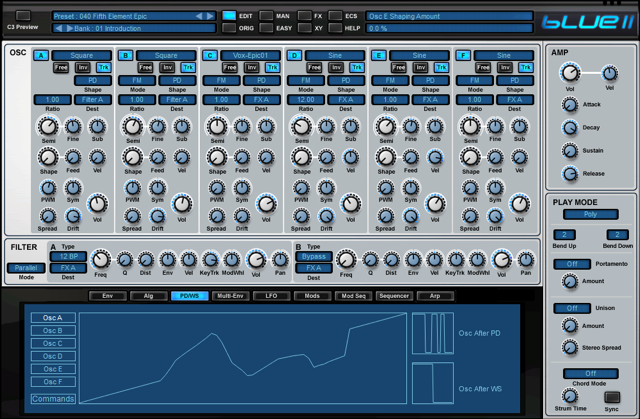 I use Blue constantly and think it usually plays second fiddle to Blade and Predator but I find that I reach for it a lot more than the others due to it’s great sound quality and initial patches. Rob Papen has added even more features in the new version of Blue simply titles Blue II.

Virtual instrument and plug-in developer Rob Papen Soundware is proud to announce availability of BLUE-II — an all-new reworking of its breakthrough BLUE soft synth for Mac (OS X 10.6 or higher) and PC (Windows Vista, 7, and 8) — as of March 10…

First released in 2005 after namesake company founder and sought-after sound designer Rob Papen formed the RPCX (Rob Papen ConcreteFX) partnership with music software developer Jon Ayers to create a powerful dream synth, the original version of BLUE has truly stood the test of time to remain a bona fide software synthesizer classic, much loved by synth players and producers worldwide to this day. But back in 2005 it already reflected Rob Papen’s cutting-edge, creative, and — most importantly — musical approach towards developing virtual instruments that truly stand out from the soft synth crowd. By first delivering FM and subtractive synthesis — subsequently adding Phase Distortion and waveshaping synthesis — into the creatively combustible musical mix, BLUE blew the competition away, as reflected in its runaway sales success. Rob Papen himself cleverly called it ‘Crossfusion synthesis’ since it covered so much musical ground so effectively. New dreams for old are an inevitable result of time and technology waiting for no one, however, so the time has come for Rob Papen to move onwards and upwards.
Today, therefore, marks the turning point in a long and winding developmental roadmap that has led to Rob Papen’s eagerly- awaited BLUE-II — bigger and better than it ever was! But BLUE-II remains true to the dreamlike ethos of its predecessor, with even more sound dimensions and features to its extended name, starting with six oscillators beating powerfully at its musical heart. These can be connected in various ways, together with two analogue-style modelled stereo filters with no fewer than 27 different filter types, an astounding range of processing and modulation options, serious sequencer, and an amazing arpeggiator. A new range of specially selected waveforms based on samples have been meticulously fashioned for creating new-fashioned and killer-sounding synth sounds to die for!
But BLUE-II is also easy to use, thanks to its user-friendly user interface with an innovative Easy Edit page for speedy sound changes, while the Bank Manager allows whistle-stop navigation through thousands of inspirational Rob Papen presets and artist sound banks covering a wide range of musical styles to suit all eager ears.

All told, then, BLUE-II represents an amazing journey into the dreamlike musical world of ‘Crossfusion synthesis’. By bringing blue sky thinking to virtual instruments, Rob Papen has succeeded in creating an outrageously original and immensely inspirational soft synth fit to follow in its predecessor’s fanciful footsteps — one that, quite simply, sounds stunning! So prepare to be blown away… again!

BLUE-II can be purchased as a boxed version from authorised Rob Papen dealers worldwide for €149.00 EUR (including VAT/tax)/$179.00 USD or downloaded directly from Rob Papen here: http://www.robpapen.com/buy-blue-2.html
Upgrades are also available as follows: BLUE owners can upgrade to BLUE-II for €44.00 EUR/$49.00 USD, while eXplorer II bundle owners can upgrade to the still-to-be-released eXplorer III — which will include BLUE-II and also the upcoming Punch-BD virtual instrument — for €44.00 EUR/$49.00 USD. (eXplorer II owners can also request a ‘temporary’ BLUE-II serial number if planning to upgrade to eXplorer III when released, while anyone who purchased eXplorer II in 2014 will qualify for a free Explorer III upgrade and can also request a ‘temporary’ BLUE-II serial number.)
Affiliate