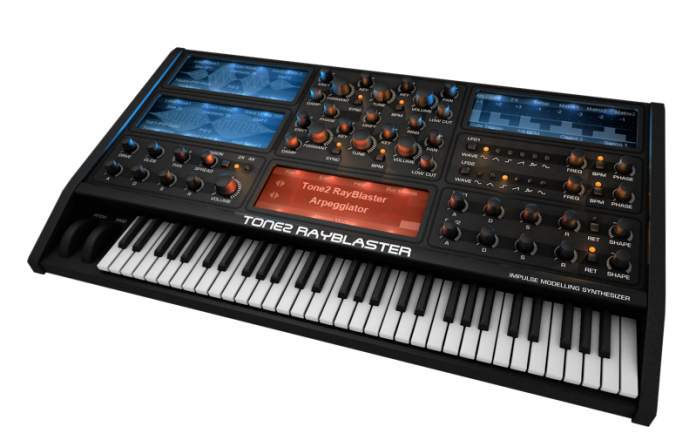 Our good friends at Tone2 have created another mind-blowing virtual instrument. If you haven’t read it, hop on over HERE to read my review on Saurus. Now the guys over there have come up with a whole new take on sound design. They’ve named it the aptly intriguing Rayblaster. Sounds pretty sweet huh? Well let’s see what this thing is all about.

Tone2 Audiosoftware are proud to officially announce the release of Rayblaster.
Rayblaster employs a new synthesis technique called Impulse Modelling Synthesis (IMS) which represents a radically different approach to synthetic sound generation. Based on the latest research in psychoacoustics, Tone2 RayBlaster unveils a completely new & unique world of sounds and sound creation that is exclusive to Rayblaster and not possible with other synthesizers.
What is Impulse Modeling Synthesis?
Offering a new world of high quality sounds and limitless creative potential for all styles of music, IMS goes well beyond traditional forms of synthesis.
Conventional synthesizers employ what is known as subtractive synthesis, in which the oscillator source is a looped waveform that is filtered to create a sound. By contrast, RayBlaster utilizes an entirely new and fresh approach to sound generation and creates its distinctive sound from many short bursts of energy, which combine to form a more complex sound. In fact, this innovative approach to synthesis is very close to what happens within the human inner ear.
Whether you’re a professional producer, synthesizer enthusiast, or a live performing musician, distinctive and high quality sounds are just a key press away with RayBlaster’s revolutionary IMS synthesis engine, its psychoacoustic processing, and its carefully designed signal processing. RayBlaster provides a vast range of sounds that would be unimaginable from other synthesizers and opens up completely new sonic possibilities for you to work with. IMS is both powerful and flexible and allows free manipulation of pitch, time and timbre in real-time.
This enables you to create complex compositions that don’t make the mix ‘muddy’. Especially when played at lower frequencies, the sounds produced by IMS have more detail and character than those produced by other synthesis methods. As a result, you get better sound quality on lower quality playback systems or within difficult acoustic environments.
Sounds
RayBlaster ships with an inspiring library of over 500 outstanding presets from some of the world’s top sound designers. Many complex sounds such as arpeggiators, vocals or drumloops automatically synchronize to the BPM. For fast & easy access to the specific sound you desire, all sounds are arranged into categories, making them easy to locate whether for live performance or within a professional studio environment.
Filters
IMS has no need for a separate filter section because its oscillators are capable of authentically reproducing the filter sound of other synthesizers by using one of the factory impulse presets or simply by importing one of your own impulses. Not only is RayBlaster capable of modeling the sound of existing filters – it also makes it possible to create completely new ‘fantasy’ filters that are exclusive to RayBlaster. This renders its filter capabilities virtually unlimited.

In addition to importing filter characteristics into RayBlaster’s oscillators, you can also import the waveform of any other synthesizer into RayBlaster. This gives you an unlimited number of possible
waveshapes, all of which are capable of being morphed in real-time. You can resynthesize short samples like a drumloop or a vocal phrase.
RayBlaster also offers you many possibilities to synchronize complex sounds to BPM as well as providing the ability to manipulate the pitch, timing and the timbre of all your sounds in real-time.
Effects
RayBlaster comes with a wide variety of effects that were developed and fine-tuned to complement RayBlaster’s Impulse Modeling Synthesis. 18 different stereo effects are included, all carefully crafted to offer the highest quality possible: Reverbs, Delays, Chorus, Ensemble, Phaser, Flanger, Rotary, Compressor, Amp-Sim, Equalizer, Surround-Encode, Vocoder & TranceGate.