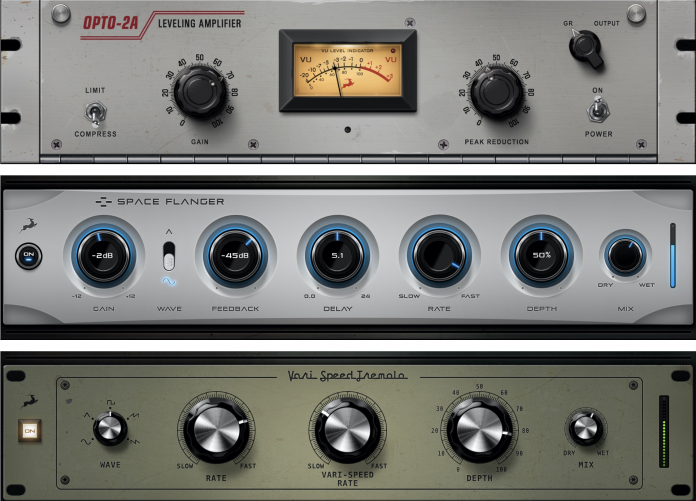 As an authentic-sounding Synergy Core effect, Antelope Audio’s Opto-2A carefully captures all the subtleties and nuances of an iconic Sixties-vintage electro- optical compressor that needs no introduction. Its continued use in broadcast and recording studios worldwide over half a century after its inception is testament to its audio engineering excellence. Exceptionally warm sound and gentle compression character have endeared it to generations of artists and producers, possibly gracing more hit records than any other outboard unit in hardware history. Having said that, key to its unique personality is the T4 optical attenuator, the outcome of time spent developing optical sensors for the US military. Its sonic signature is the two-stage release, greatly contributing to its smooth and musical compression. Clearly, Opto-2A is exceedingly simple to dial in, with only GAIN and PEAK REDUCTION knobs needed to tweak the resultant sound as the user sees fit; flick a switch on Opto-2A and the compressor becomes a limiter — just like the historic hardware from which it draws its inspiration. Infinitely versatile though it is — in spite of those (misleadingly) minimal controls, Opto-2A works especially well when applied to vocals due to its incredibly pleasant response to the human voice — try talking or singing through it to hear its incredible impact on any performance! Talking specifics, the compression ratio varies, depending on the source signal; the average attack time is fixed at 10 milliseconds; the initial release time is around 60 milliseconds for 50% of the release, with the remainder occurring gradually over one to 15 seconds before the signal returns to 100%; the release timing responds to the length and strength of the incoming signal — slower when under prolonged heavy compression or above threshold signal level, faster if below threshold signal level. Thanks to the authentic-sounding Synergy Core effect that is Opto-2A, a new generation of ITB (in the box) artists and producers — recording audio and processing/ mixing in a DAW (Digital Audio Workstation) — will be equally endeared with Antelope Audio’s realistic recreation of an exceptional warm sound and gentle compression character that has stood the test of time.

It has been quite some time since recording innovator Les Paul — one of the pioneers of the solid-body electric guitar — and The Beatles — regarded as the most influential band of all time, integral to the evolution of pop music into an art form as well as pioneering recording techniques — first experimented with flanging in the Fifties and Sixties, respectively. Though the effect itself has not changed much throughout the years, brilliant minds have come up with dozens of different approaches. Antelope Audio’s gives it a distinctly modern twist. Taking advantage of the Synergy Core platform’s unparalleled computational capabilities, Space Flanger is capable of producing phases, sweeps, and swooshes that sound truly out of this world! With Space Flanger, vocalists and instrumentalists can prepare to blast-off by setting the following controls for the heart of the sound: GAIN — adjust input volume (-12dB to +12dB); WAVE — choose between triangle and sine wave modulation; FEEDBACK — adjust the amount of output signal being fed back into the input (produces resonance); DELAY — adjust the offset between the source and delayed signal (in milliseconds); RATE — adjust the frequency of the modulating wave (perceived as a change in modulation speed); DEPTH — adjust the amplitude of the modulating wave (perceived as volume change); and MIX — blend between the DRY (unaffected) and WET (processed) signal.

Tremolo… the modulation effect that started it all! Anterior to the first tremolo units being built into vintage amplifiers, nobody knew what guitar effects were. While it may be a simple concept — creating a change in volume, tremolo went on to define the iconic sound of surf guitar, spurring a wave of innovation among musical equipment builders. But Antelope Audio’s Synergy Core-powered Vari-Speed Tremolo presents a fresh and versatile take on vintage tremolos with its five-position WAVE selector and the addition of a VARI-SPEED RATE knob. Needless to say, by adjusting how quickly the frequency of the modulating wave varies, Vari-Speed Tremolo users can spice up their tremolo effects with a welcome touch of unpredictability. Users can quickly set sounds, though, thanks to the following controls: WAVE selector — turn clockwise to choose between sine, triangle, square, sawtooth, and inverted sawtooth modulating waves; RATE — adjust the modulation speed; VARI-SPEED RATE — adjust how quickly the frequency of the modulating wave varies; DEPTH — adjust the amount of amplitude (volume) modulation; and MIX — blend between the DRY (unaffected) and WET (processed) signal.

Opto-2A and the Space Flanger plus Vari-Speed Tremolo pairing will subsequently be made available at the same pricing for Antelope Audio’s recently-announced Orion Studio Synergy Core audio interface — when it is released — directly from here: