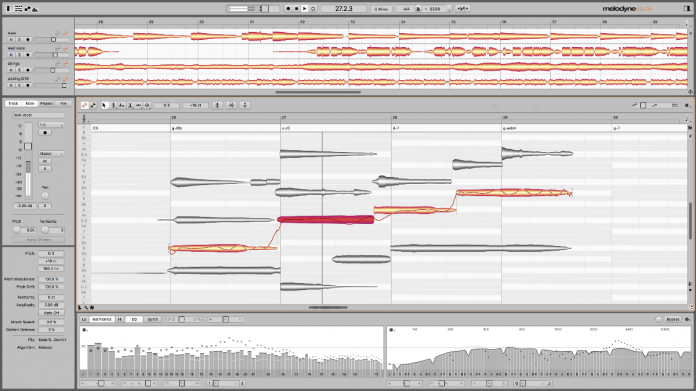 We at Everything Recording have used Melodyne since its first version. Funny story, we still have the box from the version we bought from Sweetwater. Ah, nostalgia – when you received physical copies of software. Anywho, I can’t believe we’ve arrived at version 5. Let’s see what they have in store for us.

Celemony is pleased to announce the immediate availability of the new Melodyne Version 5. The Grammy-Award-winning software Melodyne is used all over the world every day for the correction, perfection, reshaping and transformation of vocal tracks, samples and audio recordings of all kinds. A studio standard, in fact. But even the best things can be improved.

The most important new features of Version 5 relate to Melodyne’s core competence: the correction of poor intonation on vocal tracks. The algorithm now detects – along with a host of other phenomena – the presence and extent of the unpitched (noise-like) components of the vocal sound as well as breaths, which it then processes separately from the pitched components. This leads to better results, less time spent editing, and a more natural sound.

Factor in the improved weighting of pitch deviations and Melodyne 5 now hands you back – virtually in two shakes – a musically perfect vocal performance.

The volume balance between the pitched and unpitched components can be adjusted – syllable by syllable if desired. This not only helps with double-tracking and vocal harmonies but gives you a perfect and precisely targeted de-esser into the bargain.

Totally new possibilities for dynamic contouring are afforded also by the Fade Tool and the Leveling Macro, as they too work on a per-note basis – even with polyphonic audio material.

A new degree of musical freedom
But Melodyne 5 also supports new workflows that further musical creativity: With the Chord Track (and the Pitch Grid configured accordingly), recordings and samples can be adapted at lightning speed to the harmonic structure and chords of your own compositions and songs. So any library sample now harmonizes instantly with your song. That’s perfect for songwriters but also for remixers. And thanks to the integrated chord recognition, no knowledge of music theory is required.

The most important new features of Melodyne 5 in a nutshell: