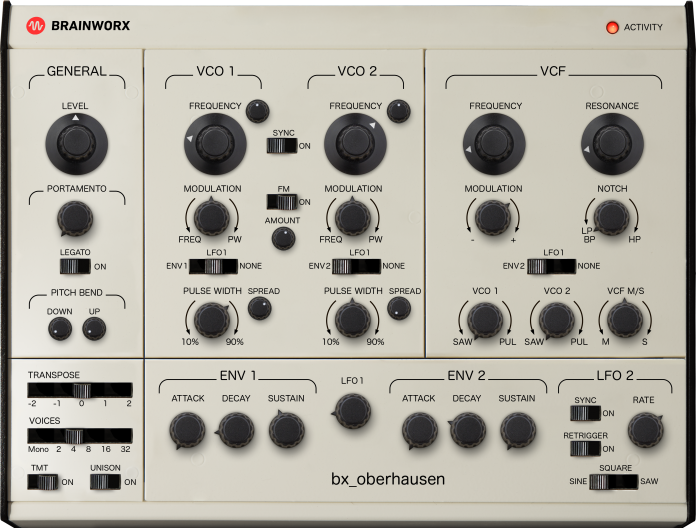 The Oberheim OBX is a mainstay in music from the 80’s, being used by artists like Van Halen and Rush. Brainworx have used their TMT (True Modeling Technology) to bring this one into the digital space.

“The Brainworx bx_oberhausen is a fantastic synth! Being an owner myself of a few of the originals, I can clearly tell how good this sounds! Besides the original concept, it also comes with really great effects to make the most brutal or subtle patches you can imagine! A must-have for synth enthusiasts!”
– Tom Holkenborg (a.k.a. Junkie XL), GRAMMY® Award-nominated, multi-platinum producer, musician, and film composer, 2019

bx_oberhausen draws deeply from Brainworx Audio’s extensive experience of working with analog audio equipment to creatively craft top- tier mixing and mastering plugins. As the cutting-edge company’s highly-anticipated first VI, it effectively revisits an acclaimed analog synthesizer expander module much loved by generations of musicians for its sought-after sound. The sound itself is reliant on fully-analog, discrete circuits and a classic state-variable 2-pole filter. First introduced in the Seventies, that trailblazing synthesizer subsequently proved popular — so much so that it was reissued in various form factors by its iconic creator using the same circuits as the original.

Original or otherwise, the acclaimed analog synthesizer’s sound now benefits from the ultimate upgrade. Thanks to Brainworx Audio ably boosting bx_oberhausen with full polyphony of up to 32 VOICES — twice the voice count of today’s priciest poly synths remaining resolutely in the analog domain, users can create sounds that are not possible using the original hardware! But better still, Brainworx Audio also includes its proprietary, patent-pending TMT (Tolerance Modeling Technology) that was first used on its industry-leading pro audio plugins like the Solid State Logic-approved bx_console SSL 4000 E and bx_console SSL 4000 G channel strips, therefore this is the most realistic recreation to date!

Digging deeper into the wonderful world of TMT, this works by ensuring each bx_oberhausen voice sounds slightly different. Why? Well, the original synthesizer’s creator specified acceptable tolerances for the individual electronic components used in its manufacture, making for slight variations in its sound — especially evident when several such synth voices are played simultaneously. So Brainworx Audio took those tolerances into account when modelling the analog hardware to arrive at a more authentic, analog-sounding result. Indeed, it is those slight variations in frequencies and phasing as well as frequency responses that add the complexity, depth, nuance, and width to the resulting synth sound.

Saying that, bx_oberhausen’s voices can be combined into a powerful UNISON mode which — when used with the unique TMT feature — forms a complex, rich, and authentic analog sound simply unrivalled by any other VIs. ‘Virtual vitamin’ boosting brings Mid/Side (M/S) technology to bx_oberhausen, further facilitating its uniqueness. Users can select which part of the sound passes through the filter section and which part does not. Results ranging from a solid bass foundation to crazy stereo processing are all perfectly possible!

Pushing onwards and upwards, bx_oberhausen benefits from an intuitive set of effects modules based on some of the Brainworx Audio brand’s best effect plugin products, plus partner Mäag Audio’s AIR BAND® shelf boost EQ. So signal chain changes in bx_oberhausen’s FX section can quickly be made with drag and drop functionality.

Complete with over 300 presets professionally created by celebrated sound designers to get them started, bx_oberhausen users can categorise their own sound creations for easy recall while also adding notes. Needless to say, the in-plugin preset management system itself is fully NKS (Native Kontrol Standard) compliant, so integrates well with NKS-enabled products.

Put simply: “A must-have for synth enthusiasts!” So says GRAMMY® Award-nominated, multi-platinum producer, musician, and film composer extraordinaire Tom Holkenborg (a.k.a. Junkie XL). After all, as “…an owner of a few of the hardware originals…” he should surely know!

bx_oberhausen is available for purchase — as an AAX Native-, AU-, VST2-, and VST3-supporting Virtual Instrument plugin for MacOS (10.9 through 10.14) and Windows (7 through 10) — exclusively from Brainworx Audio’s US-based sister company/distribution partner Plugin Alliance for an introductory price of $179.00 USD, rising to $249.00 USD thereafter — from here: https://www.plugin-alliance.com/en/products/bx_oberhausen.html