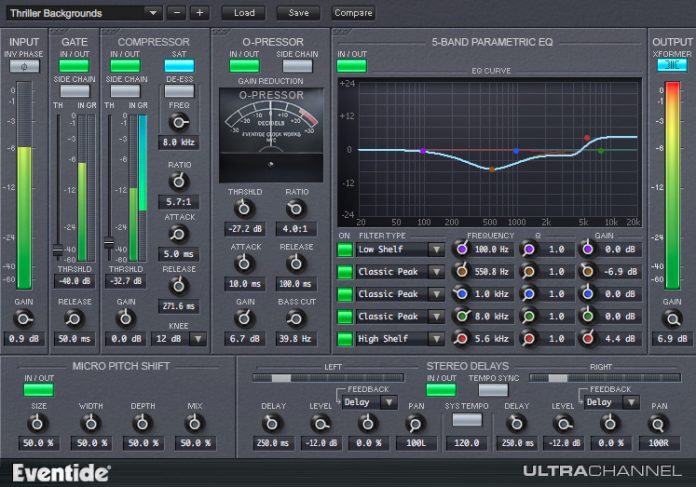 In a bold move of promotion to show that Eventide plugins have their place in the front runners of plugin manufacturers, UltraChannel is sporting a better looking interface and is available for free until midnight July 8, 2014. Just visit HERE and enter access code 0B4968F2. You will need the Pace iLok License Manager available HERE (Mac) or HERE (Windows) but you won’t have to have an iLok, although they’re nice to have if you move from computer to computer.

EVENTIDE ULTRACHANNEL NATIVE CHANNEL STRIP – FREE DOWNLOAD Dongleless 64-bit channel strip with micro pitch and stereo delay.
Today, Eventide announced the immediate availability of its new channel strip plug-in which delivers unprecedented flexibility and sonic control. The UltraChannel™ 64-bit native plug-in for AU, VST, and AAX64 for Mac and PC features micro pitch functionality from our flagship H8000, stereo delays with variable feedback paths, plus two stages of compression, gating, and five bands of parametric EQ.
UltraChannel is available as a free download, use coupon code 0F736710 here through midnight July 8, 2014. After this promo ends, UItraChannel native will cost $249.
UltraChannel features a pair of dynamics processors: the O-Pressor™, capable of extreme compression (this is the compressor section of the Omnipressor®) and a conventional compressor with de-essing and side-chain capability. UltraChannel™ also offers Soft-Saturation, and Transformer emulation which recreates transformer core saturation. This feature adds harmonics to low frequency material while remaining relatively transparent to the rest of signal. While relatively subtle, in aggregate, Transformer can bring life to otherwise dull mixes and help glue disparate sound sources together. FlexiPath™ routing allows drag and drop for reordering the signal path of the top level components (O-Pressor, compressor/de-esser, EQ, Gate).
UltraChannel includes a variety of factory presets tailored to signal sources such as guitar, bass, kick drum, snare, piano, strings, synths and vocals. A number of the presets were created by Eventide artists.
“Eventide invites all native plug-in users to own this flexible sound shaping tool with our compliments,” remarked Ray Maxwell vice president sales and marketing. “We can think of no better way of inviting new users to join the Eventide family than to share this great plug-in with everyone. We are confident that once you’ve had a taste of Eventide, you’ll be back for more.”