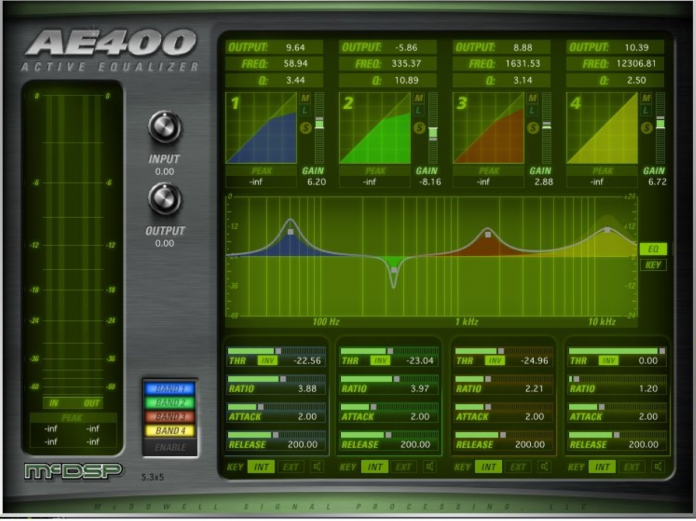 McDSP is at the top of their game right now. They’ve stayed right at the front lines with AAX, giving their customers who upgrade to Pro Tools 11 near immediate compatibility with their award winning plugins. Somehow in between feverishly porting all plugins to AAX64, Colin McDowell has created 3 more tools to add to your bag of tricks. To compliment the Swiss Army type compressor we reviewed earlier, the 6020 Ultimate EQ features 10 EQ modules from some of the most well known consoles as well as some that McDSP placed their own special spin. The SPC2000 takes their renown compressor bank and puts it on steroids to give you a very powerful multi-stage parallel compressor with the versatility only McDSP can provide. Last but not least we get the AE400, a multi-band compressor / EQ that has 4 fixed bands of active EQ.

McDSP is proud to announce the release of three all new plug-ins: the 6020 Ultimate EQ, the SPC Serial/Parallel Compressor and the AE400 Active EQ for the Pro Tools AAX Native and AAX DSP formats.
6020 Ultimate EQ – Equalization for Any Situation
The 6020 Ultimate EQ is a collection of ten equalizer models inspired from classic, rare, and modern equalizers over the last four decades. Using the popular module format and leveraging McDSP’s 15+ years of audio plug-in development, the 6020 modules offer a range of EQ configurations designed to compliment the compressor modules found in the 6030 Ultimate Compressor.
Whatever your style, the 6020 has a custom made equalizer just right for any application.
SPC2000 – Powerful Multi-Stage Compression
The SPC2000 Serial / Parallel Compressor takes the power and flexibility of the now classic CompressorBank plug-in by McDSP, and offers two, three, and four band configurations with serial and parallel routing combinations unlike any dynamic processor. Couple this routing capability with the ability to emulate any other compressor, and its clear the SPC2000 is a serious audio tool.
AE400 Active EQ – Flexible Dynamic Equalization
The AE400 is an advanced active equalizer suitable for music production, post production, and live sound.
The AE400 is made up of four bands of fixed and active equalization. Each band is completely overlapping with all other bands and has its own Q (bandwidth), fixed gain, and active gain controls. A key filter for each band allows the active gain response to be as selective or broad as needed, based on the Q (bandwidth) control. Each band can use the input signal or selected side chain signal to trigger the active EQ response.
For complex material, or subtle audio touch ups, the AE400 can get the job done.
Compatibility
McDSP v5 plug-ins include support for Intel-Mac systems running Mac OS 10.5.x (Leopard), 10.6.x (Snow Leopard), 10.7.x (Lion), and 10.8.x (Mountain Lion). McDSP AAX plug-ins require Pro Tools 10.3.6 or later, or Pro Tools 11.0.1 or later, on Mac OS X 10.7.4 and later versions. Windows support will be released soon.
In addition to Pro Tools, McDSP v5 plug-ins support Logic, Garage Band, Digital Performer, Ableton Live and other AU compatible DAWs. Please note the McDSP v5 release is a paid upgrade for non-v5 customers. Specific pricing can be found by visiting McDSP’s online webstore.