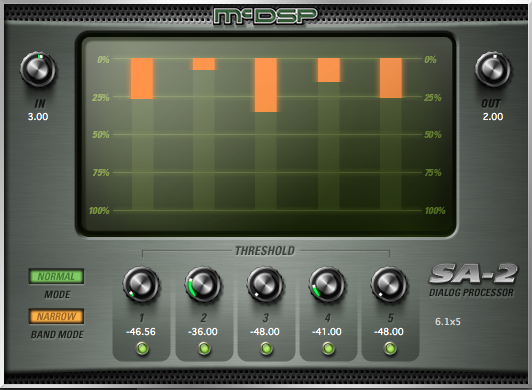 I figure television and movie sound is a nightmare. I’ve never really mixed any audio for video but given the challenges of location, equipment, etc it must be tough. McDSP has a plugin to help. They also have recently released Version 6.1 which has multiple upgrades and tweaks!

Dialog. The focal point of any movie, television show, documentary, or for that matter, any creative media production involving the spoken word. Add to the mix a sweeping musical score, dozens of foley effects, and plenty more – and it becomes clear the job of dialog mixing is a tall order. After all, if you can’t hear what the actors are saying, why watch it at all!!
The SA-2 Dialog Processor is based on hardware originally conceived by Academy Award winning re- recording mixer Mike Minkler and used on over 100 major motion pictures. The SA-2 is designed to improve the overall sound of recorded speech. But the SA-2 is not just for dialog. It’s equally useful for vocals, and is a great tool for adjusting the timbre of any track, a reliable de-esser, and a fine multi-frequency compressor, in our completely biased opinion.
The SA-2 Dialog Processor is made up of 5 bands of active equalization, configured in a variety of modes to best address common issues of dialog. Each band of active equalization has a threshold control to determine at what signal level the active equalizer begins to effect the signal. There are also enable buttons for each band to quickly audition the effect of any given band. Two mode selectors – one for controlling the ballistics of the active equalization, and a second for placing the five bands at strategic locations in the frequency spectrum. Finally, there are input and output gain controls for overall adjustment.
Feature List:
Five independent bands of strategic active equalization
Multiple process modes for a variety of applications
Unique signal reduction metering
Double precision processing
Ultra low latency
Mono and stereo versions