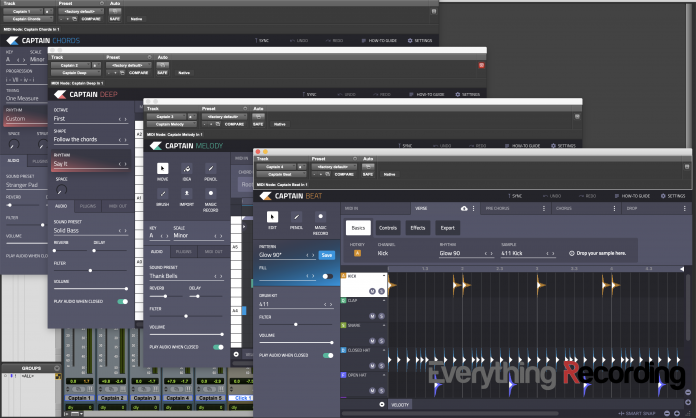 Inspiration can be an evasive thing. Maybe you have an idea in your head but can’t translate it. You may find the flow gets lost penciling notes for chords in your DAW. There are many creative barriers in the music world and it’s time for a tool to break through them. There’s a suite of plugins called Captain Plugins available to tackle this issue and today we’ll review them.

Although the name invokes much of my childhood cartoon watching, I pulled myself back from that YouTube tangent and got into each of the plugins that make up the bundle. Captain Plugins is one of many groundbreaking plugins created by Mixed In Key. These guys are no stranger to the world of composition. With artists like Zedd, Diplo, Kaskade, David Guetta, and Armin Van Buren using Mixed in Key’s flagship software, this company has established itself as an expert in understanding what makes music work and flow together. Now they’re taking that technology and translating it into a tool you can use to make your unique creations, whether you can play a single chord or not.

How Does it Work?

The suite works together with each plugin serving a specific purpose.

I’ll admit it. I’m not the best keyboard player. I found music theory a tough concept to grasp and mostly go with what feels right. This approach can sometimes do more harm than good, but I get by. To mitigate my not listening during piano lessons, I resorted to buying “midi packs.” These are four bars of chord progressions in MIDI form that you can drop into your DAW. Yes, they help get an idea started, but there was no decent way of previewing other than digging through the folders and dragging and dropping each progression. By the time I found something useful, I was bored.

Captain Chords has taken this same concept but placed it in a plugin, combining both their library of instruments, as well as the ability to use third-party VST’s. Additionally, Captain Chords allows users to open a selection of popular VST’s inside of Captain Chords. Just follow the included instructions for your DAW.

Pushing the concept even further, Captain Chords comes with many tools to make your progression your very own. Tabs appear across the top with a section for each part of your composition. These tabs make recalling song sections easier than scrolling through the bar and beat markers. After selecting the key and scale you want, preview popular progressions in the Progression section. To spice up your next future hit song, you can choose a different inversion for each chord.

The crown jewel of this plugin bundle is how they’ve mapped the chords to single keys on your keyboard. Instead of needing to know precisely how to play a particular chord, just press the corresponding keys on your keyboard, and you’re off to the races! Just make sure and mention this site and Mixed In Key when you’re accepting your award at the Grammys.

With the framework laid down in Captain Chords, you can tweak the rhythm and timing. Timing adds different rhythmic patterns to the progression and can lengthen or shorten the progression. To assist even further with creativity, the plugin has premade rhythm patterns to break the monotony of notes merely playing on the fours. You can record your own patterns by pressing Record in the Rhythm section and using either a MIDI controller or your computer’s keyboard to tap them in.

The three knobs just under the Rhythm section offer fine-tuned controls for each note in your chord. Space lengthens or shortens each note for added sustain or pluck. Strum staggers the notes of each chord to give it an arpeggiated sound. Finally, on the top right, there are additional inversion parameters along with a quick octave and complexity knob.

Once your sections are all mapped out, the choice is yours to either keep the MIDI in the plugin or move the MIDI into your DAW. To transfer MIDI to your DAW, simply drag the blue rectangle at the bottom right of Captain Chords. To keep the plugin from playing audio when closed, deselect the “Play Audio when Closed” button in the bottom left.

With the framework of the song mapped out, you can move to the next plugin of your choice in the suite. I added Captain Deep next to get the bass tracked out.

Captain Deep does its primary task by laying down a foundation for bass in a song. There is an Octave control, along with a Shape function. Four basic choices show up where the bass notes can either explicitly follow the chords in Captain Chords, provide opposite movement countering the root note, minimally adjust melody, or stay on the root note entirely. No option for variation between these is available.

Captain Deep is the only plugin in the suite that must be connected to Captain Chords to work. Once you create a pattern in Captain Deep, the notes cannot be edited. In Mixed in Key’s defense, the plugin does state that MIDI editing is coming soon.

The Rhythm section bolsters Captain Deep with plenty of options to time out the bass line and Space to shorten notes for either a constant bass or a staccato track.  This transition is tough from starting with so many controls in Captain Chords.  I’m going to venture a guess to say Mixed in Key is aware that Deep needs more parameters and is working on this in future versions. Overall, its a decent tool for necessary bass parts. If you want a show-stopping bass track, you may want to reach for the next plugin instead.

Being the most decked out plugin in the suite, Captain Melody kicks the door in with an arsenal of bells and whistles. Some of these controls may feel a little intimidating at first, but it’s effortless once you understand the basics.

The way I usually work is to play my track and riff using either a MIDI controller or your computer keyboard then use the tools in the top left of the GUI. If you’ve connected to Captain Chords, the scale and chord progressions are automatically matched. All you have to do is find the initial phrasing and riff on the notes corresponding to the mapped keys and press the Magic Record button to sketch out your idea.

With the riff in place, click the Idea icon. This section will spice up your created riff with various controls for how far you want to push your idea. To use the Idea Box, first, click the icon, then the section that houses the notes. From there, you can drag the Idea Box to the area you want to select. Tabs will show up above the note section.

Shape adjusts the melody with controls for the Step and Leap. These two controls determine the separation and variation of the melody. Direction has parameters for random, up, down, down and up, and up and down. The Rhythm tab has controls for how many notes exist in your riff along with timing and length. The First Note tab will determine which note(s) of the chord will start your melody. Lastly, with Lanes, you can select the probability percentage that each note in the scale will be in the melody.

If you want Captain Melody to control the sequence of notes, use the dice. Clicking the dice randomizes all of the parameters in each of the tabs. From there, you can magic record or pencil more notes. 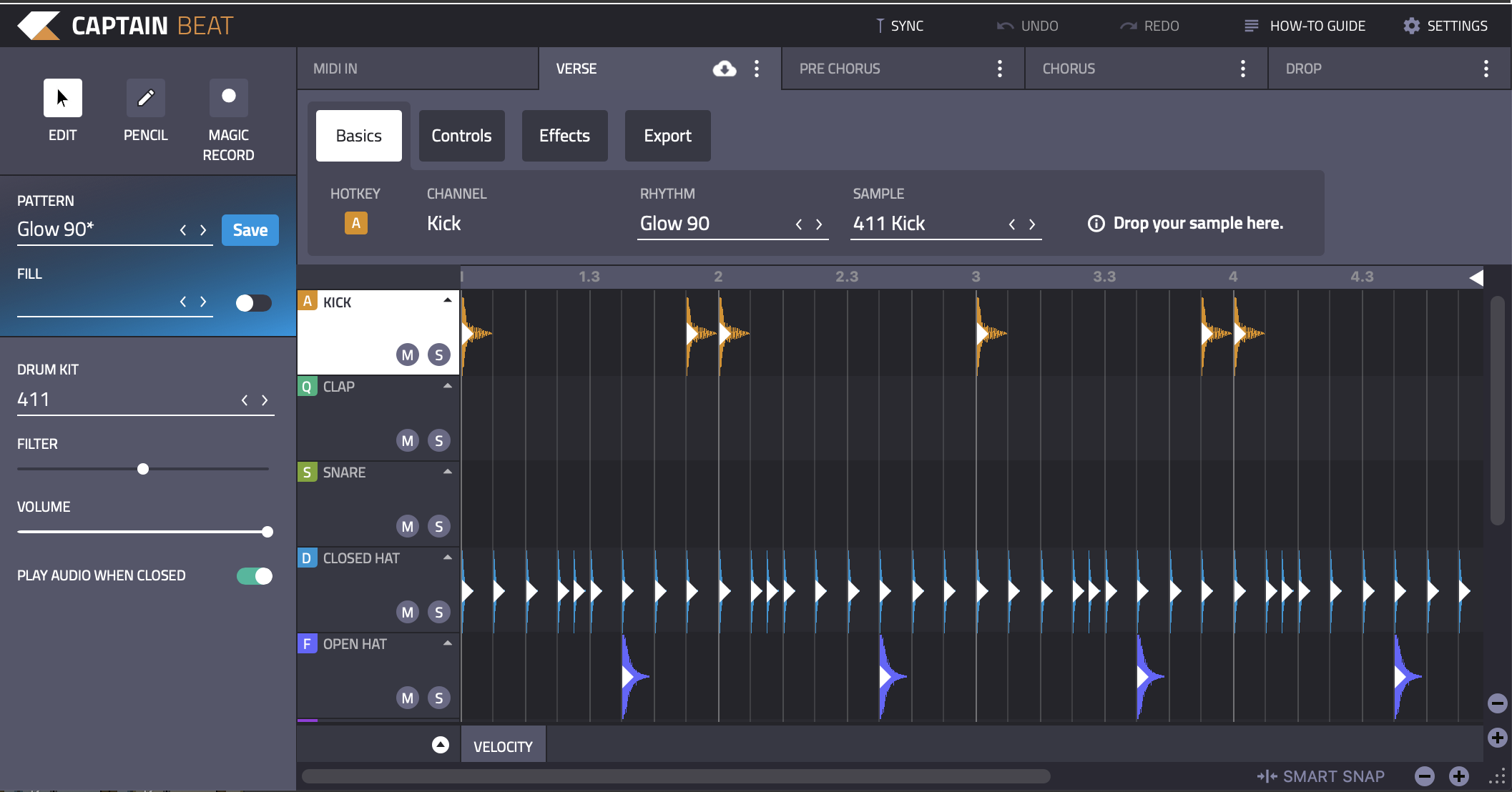 To round out the suite, we have Captain Beat. This rhythm plugin has 16 lanes that can either incorporate its samples or add external one-shots. The same goes for patterns. Captain Beat has a library of pre-made patterns that can be edited by either penciling notes or using your keyboard’s corresponding keys. If you look next to each sample lane, you will see a letter that represents the key on your keyboard.

To make fills easier, Captain Beat can replace the fourth measure with preset fills. When changes are made to the Fill, each Fill can be saved. Above the grid are several tabs that allow users to shape each sample. Controls can adjust the Attack, Hold, Decay, Pitch, Volume, and Panning. Effects add Delay and Reverb to the sample, and lastly, export determines how you want to export the beat. You can select between channel audio, channel midi, master audio, and master MIDI. Finally, at the bottom is a velocity control for each note. Strangely though, no shuffle control or humanize feature. To do this, you have to manually drag notes. 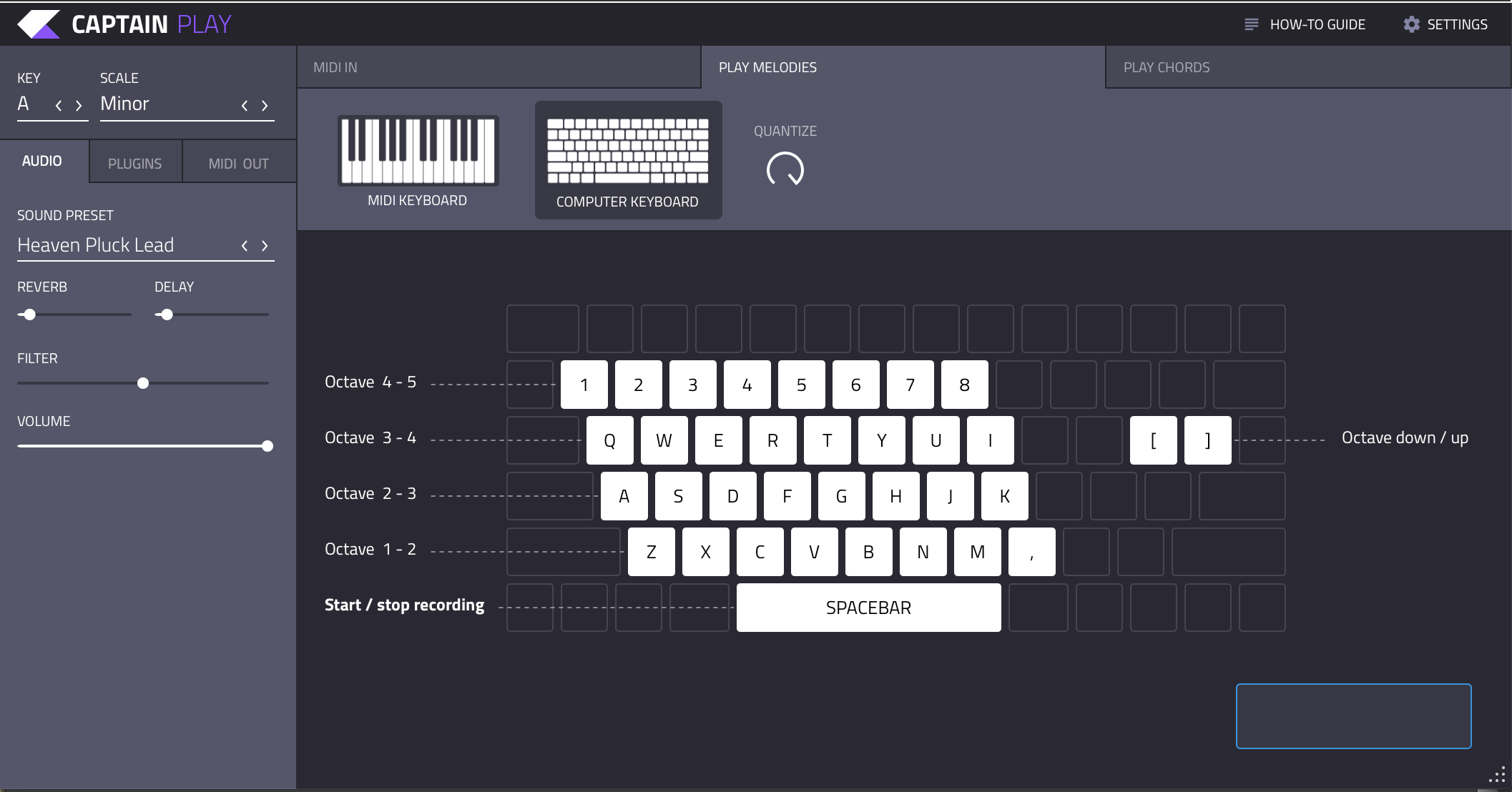 Captain Play works as a sketchbook to quickly knock out chords and melodies. You can choose between either a MIDI or computer keyboard with tabs to play melodies or chords. Once you’ve riffed your idea, you can drag the MIDI into your DAW.

Overall I find Captain Plugins immensely useful. They’ve brought composition to the masses with tools that anyone can use to create full songs quickly and easily. I especially like the bundle because it’s taken your computer’s keyboard and turned it into a MIDI controller, complete with one button chord combinations. I know some DAWs already let you use your computer keyboard as a controller but not to this extent. Third-party VST support brings all of my favorite synths into the interface for preview. Any musician should have this bundle in their arsenal, whether you know every chord in the world or not. It just makes things easier.

On the subject of alternatives, Mixed in Key has another plugin that is essential to using Captain Plugins with existing projects. Mixed In Key Studio Edition is a plugin that detects the key of a song in real-time. Place it on your master bus in ‘key’ mode and it will detect the key of your song. You can use the ‘Notes’ mode to determine the notes in a melodic progression. This is a useful plugin for working on remixes or quickly referencing a client’s song key at a glance. If you buy Captain Plugins, go ahead and get Mixed in Key Studio Edition as well.

Aside from the above-mentioned Captain Deep’s foibles which I suspect Mixed in Key will be fixing, there are only a few small things I’d improve. Initially, I was working in Studio One and Pro Tools, not realizing these versions are fully supported yet and had a few issues. I only mention that just to be aware that although there are versions for these DAWs, you may have a few hiccups. Trust me, the benefits of the suite outweigh the small little bugs you may or may not even experience with Studio One or Pro Tools.

In Captain Chords, I’d really like to see the ability to select the whole progression and globally change the complexity of the chords. So far, the only way I know how to change complexity is by clicking each chord in the progression. I’d also like to see expanded controls for their onboard instruments. The settings are pretty much “what you see is what you get”, and while they’re good starting points, I’d like to have more control. I usually use their sounds as a starting point and move to third-party instruments.

Lastly, I feel like Captain Beat should be connected to Captain Deep or Chords. Instead of penciling or recording my riff, I’d like to see Captain Beats lock my kick to the chord changes or the bassline.

I really think everyone can benefit from Captain Plugins, whether to learn more about theory or just speed up workflow. On top of speed and efficiency, Captain Plugins serves as a writing partner. With so many of us working solo right now, collaboration is essential to growing. At only $79 for the Captain Plugins suite, or $99 for Captain Plugins + Captain Beat, these plugins provide great value.