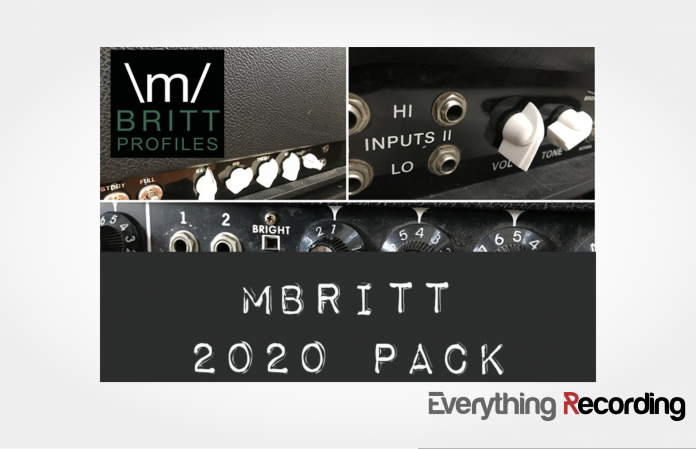 MBritt 2020 Pack Rundown:
5 / 5 Reviewer
BUY: $39.99
Pros
- Very Versatile Rig Pack. There's not many genres this pack can't cover. <br? - Presets give instant starting points to get your creative ideas flowing
- The Performance presets are my favorite. I hope to see more presets like this in future packs.
Cons
- None
Summary
Whether you play live or in studio, there is something for everyone in the MBritt 2020 Pack.
Rating
I know you’ve watched the YouTube videos, heard some of the samples by guitar players much better than me, but I’m going to take the less beaten path with a written review of Michael Britt’s latest Kemper Profile pack: MBritt Profiles 2020 Pack. Written reviews tend to allow for more detail, so we’ll go over more of the specifics of the pack. We also featured a Kemper Profiler Review last month and it can be found HERE.

It’s been close to two years since Michael Britt (aka Dr. Kemper) has released a new pack. This wait is in part due to his focus on quality over quantity. It’s refreshing to see someone who isn’t just out for your wallet. While Mr. Britt is constantly looking for new profiles, his previous packs have become harder to beat. The 2020 Pack represents most of his personal amp profiles and a few interesting amps, he’s profiled along the way.

This pack contains the following:

Before we get too far, we should go over the naming conventions. At first, you may be slightly confused by letters and numbers at the end of the preset names. These actually represent notes pertaining to specific versions of profiles he’s created and certain special pieces of gear that he used. Below is a description of what the letters stand for

Let’s Get into it

This pack was created in Firmware 7.x and utilize .krig. Make sure your OS is 7.x and above. A word of warning – if you use prior versions, these presets could cause trouble and if they did work, they would not have all of the effects and parameters.

With the technicals out of the way, let’s get into the collection. Each of the 14 amp models has anywhere from three to thirteen versions per amp, usually ascending from cleaner to more overdriven. Individuality is encouraged by Mr. Britt and he gives the keys to make these models your own. He kept the EQ section of the amps fairly neutral and suggests using the Definition control to make presets brighter or darker. By using the Definition as a “tilt” EQ, turning it up will make the model brighter, turning it down will make it darker. Some other considerations he mentions is utilizing the Power Sagging, Compressor, Clarity Control, and Speaker Character controls. These can help make these presets your own.

So How do They Sound?

How do you think? They sound amazing! I own all of the previous packs, and while you could surmise Michael Britt couldn’t raise the bar any more than he did with other packs, he has certainly raised it even higher. The presets are virtually “mix ready” and work for just about any genre.

The T Hat profile is one of the most versatile presets and I bet I’ve used it on every track that needs a tone that can transition from cleaner to break up just by dialing the volume. The Wrekt model with the low end turned down a little is one of the best distortion models for rhythm on just about any genre. Simply dial the drive in and you’re all set.

The presets are great, but what shines, even more, are the presets and performances. I found myself playing more in the performance presets than anything. I would really like to see him create a new pack of creative presets like what he created in the “Inspired”  and “Variety” section. He really has an incredible ear for recreating classic song presets as well as his own.

I think Michael Britt is doing all of us a great deed by offering his personal amp profiles. I think he could easily charge double what he does simply based on the quality of the models and presets. My Kemper pretty much stays on the MB folder in my Profiler. There’s just no need for much else unless you’re going for detuned metal presets, but even some of his models can be purposed for this and add a unique touch to even those tracks.

For more information and to purchase, visit MBritt’s site HERE.