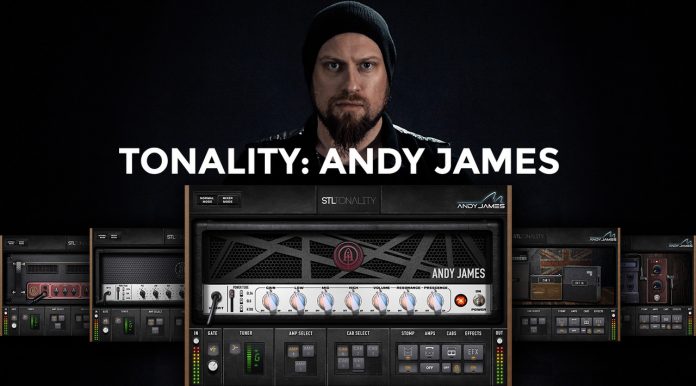 After the successful rollout of two all-in-one Guitar Plug-In Suites from Howard
Benson & Will Putney, STL Tonesannounces the official availability of an all-new plugin suite by renowned guitarist Andy James.

Multi-instrumentalist and virtuoso Andy James was born in the east of England, Norfolk.  There are very few things Andy James hasn’t accomplished in his successful 20 year career as a solo guitarist, from releasing 7 records, touring the world and even self producing and mixing his own recordings. Over the years AJ has
developed a signature sound. The sought after guitar tones from guitarist and mixer Andy James have
powered a string of successful releases, including his latest 2018 LP titled ‘Arrival’.

In making the announcement, Sonny Truelove, STL Founder and CEO states: “We’re so excited about the launch of Andy’s Tonality Plug-In Suite. Andy was our first ever artist signing to the company nearly 3 years ago for his Kemper product, so I think it’s fitting that nearly 3 years to the day, we were able to collaborate and release Andy’s signature tones in plugin format, which was something he expressed interest in doing way back then! ”

Adds Andy James: “This plug-in has completed my life long search for the ultimate guitar tone, completely in the box. 100% creativity while recording, 0% time wasted tweaking and second guessing my sound. ”

The Andy James Guitar Amp Plug-In Suite, with exclusive presets crafted by AJ, is available for purchase on August 30th at a special introductory price of $89.99. A free 10 day trial is also available.

Tonality: Andy James Plug-in Suite is compatible with all major 32- and 64-bit audio hosts, including

Standalone options on both Mac and Windows. For audio and video demos, please visit www.stltones.com