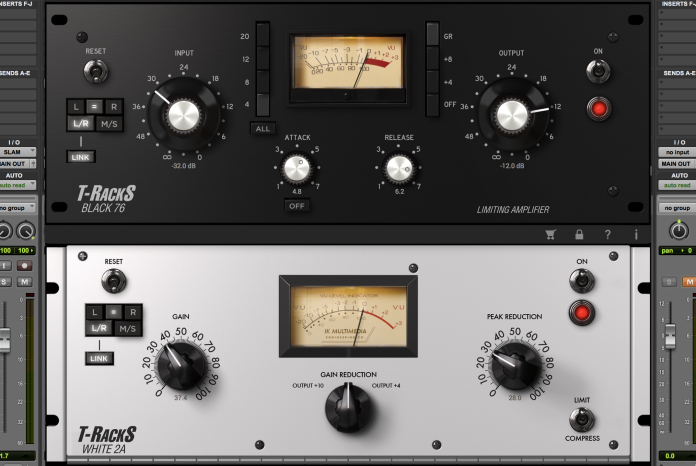 It’s been a while since I’ve done a review so what better way to get back on the horse than with a review of IK Multimedia’s new T-RackS Singles, the Black 76 and the White 2A. The good folks at IK Multimedia generously gave me a first look at these two vintage style compressor plug-ins and at first I have to admit, I was skeptical.
You see, I can probably give you more than a few companies who have had a run at emulating these two compressors, so my question was, “Why take a run at something that’s been done so many times?” The answer might surprise you.

I did a review a while back on the T-RackS Singles I purchased (can be found HERE and HERE) and was very impressed with the level of character that each of the models presented. The thing I liked about all of these singles is that they tackled a few very tough compressor models as well as creating their own, all of which had their own flavor you can add to the mix. Since that review, I have moved up to the T-RackS Deluxe model and it only gets better from there. One of the benefits of buying the T-RackS bundles over the singles is that you get the mastering rack as well with VERY smart metering, plus you can buy THIS BOOK, and follow along to learn how to use these plug-ins to their max.

IK Multimedia has made it very easy to learn how to use their software to the utmost possible potential and beyond at a fraction of the cost of the Waves and MCDSP types of the world. I know all of this sounds like an infomercial for IK Multimedia but let me assure you it’s not. This is all based on my use of all of these plug-ins as well as me investing money out of my pocket (as you can read about in my previous reviews.) Seriously, I use at least 3 T-RackS plug-ins on various tracks for any given song I mix.
So how did these two fare against every other software company’s version of these two staples in the recording industry?

The Black 76
This compressor is based on one that probably shows up somewhere in almost every hit song you can think of, the Universal Audio 1176 LN. Not only does this particular model tame transients, but it also adds a very smooth character to the track its on. This thing is a workhorse in every sense of the word. You can put it on anything and it sounds like gold, Drums, Bass, Vocals, Guitar, Accordian, Cowbell, Wife’s Incessant Nagging, and it instantly sound better. And IK’s plug-in version is no different.
One of the best parts about how IK Multimedia has made the plug-in is that as soon as your fire it up on a track, it instantly adds its mark. No excessive tweaking needed. It’s like they found the ideal setting off the bat for any application you would use, and set it as the default. Of course, you can use other settings, but why have to sit there and deal with dialing in the sound too much if you can just have a great starting point? Apparently, IK shares the same belief.

To show you what I mean, here’s a clip of an acoustic track with no processing on it at all.
AGT Black 76 Before by Everything Recorded
Now watch what happens when I simply put the Black 76 on the track with NO tweaking.
AGT Black 76 After by Everything Recorded
Incredible huh. Extremely noticeable difference. It brings the track to life, adding a smoothness as well as better bass response without making things muddy or overbearing.
IK didn’t stop there, they’ve also made some outstanding preset as well for all of you lazy folk who don’t like putting a little elbow grease on the track. So you can send them a Hallmark card, or at least a cuddle for that, but honestly, if you’re too lazy to tweak a few knobs on a compressor, you probably wont send a thank you gift… you disgust me!!!
The White 2A
Another heavy hitter in the recording industry, the Teletronix LA-2A was nothing short of a work of art. All tube construction meant that this model has a very warm, natural compression and the gain reduction was instant with no added distortion. Just as much of a workhorse as the 1176, the LA-2A shines on vocal tracks, as well as piano, but where is really stands out is on bass.
Once again, IK Multimedia’s version does just the same, giving just about any track extra warmth and very buttery compression. This plug-in sings, and just like the Black 76, as soon as you turn on the White 2A, you know it. Lows sound lower, those untamed transients are tamed, your kids grades get better at school, and all is right with the world. Don’t believe me? Ok… well I’ll prove you wrong (Except the kid’s grades thing) with an audible example.
Here we have a bass track with no plug-ins added. Just the unprocessed sound straight off of a DI box.
Bass White 2A Before by Everything Recorded
Now lets add the White 2A on its default setting with no knobs touched.
Bass White 2A After by Everything Recorded
See what I’m talking about? Just the factory setting and you’re already right where you need to be. It just adds that tube growl and brings out the mids, all without driving the bass too hard or blowing out the speakers. Just think, if that’s the default setting, how much more could you get if you tweaked it even more? Well, you’ll have to figure that one out as soon as you go buy these two incredible plug-ins.
So how do these fare against the rest of the world of 1176 and LA-2a plug-ins out there? I put it up against the Waves version, The Bomb Factory, and Universal Audio’s OWN version of their OWN units to see how great these highly discounted versions of the plug-in worked. They hung right there with every single one of them, producing close to the exact same tonal qualities as the plug-ins that cost a considerable bit more. PLUS, unlike most of the rest, you can run these two plug-ins in mid/side mode, giving you more diversity in your stereo field. So not only do you get a painstakingly created plug-in based on the actual hardware unit, you also get one at a fraction of the cost of the other guys with added features.

Now, since I’ve addressed most of your questions and concerns, it’s time for you to answer one of mine.
Why do you not own these yet?

NOTE: T-RackS Singles Black 76 and White 2A are not included in the T-RackS Bundles so you gotta purchase those separately.

Price: $99 Each.
For more info and you better be buying these, click HERE