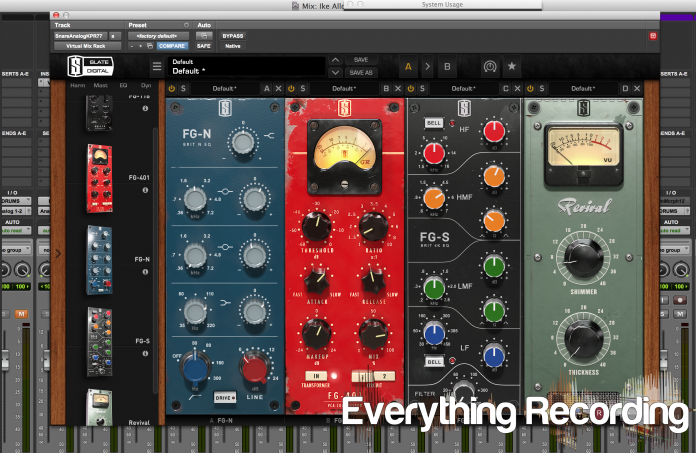 Unless you’ve been living in some analog cave (which sounds pretty cool now that I think about it), you’ve heard about Virtual Mix Rack. Steven Slate, (who a friend of mine has called the “Criss Angel of Pro Audio”) excitedly announced VMR well over a year ago and the recording community have been tapping their foot in anticipation. Finally, the day is upon us. Virtual Mix Rack is here and we’re going to look under the hood to see if it was worth the wait.

Virtual Mix Rack attempts what other software developers have tried to make catch on but unfortunately have not: a modular set of plugins housed inside of a proprietary shell. No, these plugins cannot just be placed in an insert without the actual “rack” being used. This may seem a bit redundant but once you see exactly what you can do inside of the rack, you will see why Slate chose this setup.

We all saw the beginnings of this approach in Slate’s Virtual Bus Compressors (review here) when we were given the VBC Rack option to link all three compressors together. The flexibility of being able to chain together or audition each individual compressor in one window proved very useful, thus the concept was taken a bit further. VMR comes in all of the usual flavors of plugin i.e.: AAX32/64, VST2 & 3, AU, and 32Bit RTAS and also employs better use of native processing to allow for more instances to be used across more tracks. Obviously this would be a must for a plugin who runs more plugins inside of it.

Virtual Mix Rack employs a 500 series style rack that up to 8 “modules” can be housed. As it stands right now, there are 5 different modules available, but future expansion for many different types of mixing, effects, and mastering tools are sure to come. The 500 series style allows for a vast combination of modules that can be used in classic as well as nonconventional ways. The rack comes housed with a solo feature for each module, A/B comparison, presets for each module, as well as a “global” rack preset. One great thing about the A/B comparison is you can rearrange your modules and compare the results between the two to pick the best fit. Modules can also be cloned from rack to rack in a host by holding down the “alt” button while dragging to the desired destination. A lot of detail has been used to design this rack from the sleek inviting look, all the way down to the virtual module covers that protect your rack from “virtual dust” when not in use. When using a plugin with swappable modules, automation would seem to be a daunting task but the rack takes care of this internally by assigning a letter and number system for each module. Parameters can be seen by clicking the letter above each module in the rack and module. Depending on your host, the parameters will either be simple alpha numeric or actual names. If you would like a default rack preset to show up for each loaded instance, this can be selected under the default menu that drops down when you select the star. Lastly, at the top of the rack is a small volume knob that allows for either linear or circular knob controls. That icon tricked us at first because it appears to be a volume trim knob for the rack.

The rack in itself is all well and good but without modules, you pretty much just have a nicely designed box that you can place on an insert. The modules are what really shine in Virtual Mix Rack and the guys at Slate Digital have picked some of the classics to begin with.

These modules have been painstakingly created using “master of all things virtually analog” Fabrice Gabriel (the mastermind behind AirEQ). Part of the reason VMR wasn’t released sooner was due to the perfectionist nature of both him and Steven Slate. Like everything Slate Digital put out, it has to be as close to the actual thing as possible. All of the little nuances of each piece of gear being modeled were taken into account and somehow magically modeled into 1s and 0s to behave with the same non-linearities as their analog counterparts. On top of that, Slate added his own twists to make them even more useful in digital recording. Once the analog and virtual dust settled, we were presented with 4 modeled versions of hardware and one Frankenstein straight from the brain of Slate himself. On the modeled side we have the FG-N, FG-S, FG-401, and FG-116. These plugins were taken from classic pieces of studio gear that have stood the test of time and are on the wish lists of just about every engineer. The last (and free) module is Revival, which is a sonic enhancer type plugin for the low and high frequencies.


The FG-N is based off of a Neve 1073 channel strip. Although this EQ only came with 3 bands, the FG-N has added another mid band similar to the Neve 1081 EQ. On top of the 4 bands of EQ, you are given the line-amp stage as well that you can push to saturate the EQ’s into distortion. The drive button was added to compensate the output volume to account for pushing the input. Another great addition is the removal of the stepped knobs, giving you complete control over exactly what frequency or volume setting you want. The EQ definitely packs some weight in the low end and the high end is also very silky. One feature I missed on this one was the option to change the low shelf to a bell filter, but other than that, the EQ is pretty much all of the catch words used to describe the original.

The FG-S is based off of an SSL console channel EQ. This one is pretty straight-forward and similar to the hardware version. We’ve all used some digital version of this EQ and it is very familiar in look and sound. This unit does have a little less of the “sterile” sound you get with others. There is definitely some vibe to this plugin.

The FG-401 is based loosely on SSL’s console VCA compressor with a few tricks added. You are given the option of adding the transformer during compression to add some oomph to the track as well as 2 circuit paths. The circuit path switches are probably the most subtle changes, but Slate claims that the first circuit is more aggressive and the second is a little more transparent and allows the low frequencies to step forward. One of the great additions to both compressors is the mix knob, which instantly lets you add in the amount of compression without having to set up a side-chain bus.

The FG-116 is Slate’s take on the 1176 FET style compressor of course with the same mix knob that is in the FG-401. Although it is missing the all-buttons-in “Nuke” mode of the original, it has some nice options to compliment the unit such as a complete bypass of the dynamics mode by shift clicking the attack knob. This will allow you to use the modeled transformer as well as gain staging. Another nice trick that most 1176 style plugins lack is the shift click of the input and output to compensate for gain changes by linking the two knobs. They claim this unit took the longest to make and it shows.

Lastly we have Revival, which is a completely new (and free) module that adds warmth and sheen to your tracks. This two-knob module incorporates a great deal of mojo and is an instant fixer for track lacking low end or top end character. Although it’s very easy to get carried away with, you can easily use this across every track in your mix. I see this plugin as Slate’s way of making up for the year’s wait and it definitely makes up for it in spades.

All in all the VMR is everything they’ve described it to be. It’s great to be able to make preset channel strips and A/B content all from one window. It also drastically adds more space on your DAW inserts by housing what you would usually have across 4 inserts. VMR also is fairly conservative with the DSP use. I could throw VMR on a lot more plugins on a session than I expected without bogging the system.

You can really tell a lot of detail went into making this, even down to the way each instance of a module’s “wear” on the faceplate changes per instance (you’re all opening your DAW as we speak to verify that one I know.) The plugins definitely have their own vibe, which is tough to do in a market saturated (yea I see the pun) by emulations of all of these analog units. Just the way you’re able to chain them makes this a plugin I’ll be reaching for from now on.

So what is there not to like? Well, there is no way to compensate for gain with the rack. I’ve heard there is a trim module in the works, but there actually is a type of gain staging you can use that is sort of a hidden gem. Simply bypass the dynamics on the FG-116 and use the input output knobs to trim the volume at the end of your chain. Sure you will have to use the 116’s transformer section, but it is a decent work-around until another option pops up. Something else I’d like to see is a phase button. I hate having to open up another digi EQ jut to click the phase. I also haven’t forgotten something in a certain AES preview video @ 2:49 (link to post) about integration of VCC and I need the plugin in Pro Tools 11 post haste! Add those few subtle changes and you’re completely golden.

We all know there is a lot hype and even sometime even more lead time behind Slate Products and yes Steven Slate uses catch words like “algos” but he is the even flashier incarnation of Steve Jobs. That’s why most of us like him. I even believe he is a good sport about all of the ribbing he gets in the industry, but there is one thing that no one can deny: the man backs up every claim he makes and the products speak for themselves. It is refreshing to see a CEO with personality that cares as much about his product as Slate does. I understand the excitement of having a product at 80% and wanting to scream it to the world and I respect someone with the balls to not release a product until he feels it is at his 100%. I think Virtual Mix Rack is as close to ideal as you can get with the concept and quality. I know others have fallen short with the concept of an “inception style” plugin within a plugin, but Slate has finally found a way to make it the new convention.
For more information and to purchase, visit http://www.slatedigital.com/products/vmr