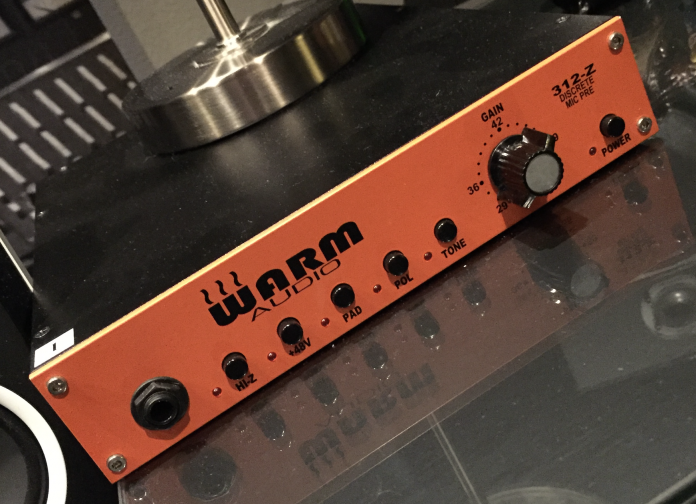 Warm Audio… Ever heard of them? In most cases you probably haven’t, but I have a feeling, very soon, this name will be synonymous with the word insanity. Now, why would I say that? The answer is another question and is very simple: Why would someone charge you $450 for a preamp that sounds just as good, if not better, than one twice its price? Now you’re probably asking me, “How can you prove this?” Very easy, I own both of the culprits in question

Naming your company after an adjective that is used almost exclusively to describe the most desirable trait in recording sound is a brave move. If you don’t follow through on delivering nothing short of vintage analogue tone, you’ve pretty much lost all credibility in the pro sound industry. Consider the founder, Bryce Young, justified in boldly naming his company Warm Audio. What’s even crazier about Bryce is that this started out as just a hobby; but his designing of custom “one off” preamps and modding of other preamps got him quite a bit of attention from customers. So much that he decided to take a crack at designing his own line.

The unit, no doubt, will stand out in the studio with its orange color and vintage vibe. It comes in a half rack one channel version, but can be rack mounted when you buy two of them (more on why you’re going to want two in a sec). The simplicity of this unit is what makes it so great, even down to the button labeled “tone” that I have determined is linked, by some sorcery, to a vintage analogue console hidden somewhere in my house. The front quarter-inch HiZ input makes life easier for running in the guitars and keyboards without having to dive into that tangled web of cables behind your desk. Might I suggest using this as a channel to add spice to your re-amped direct in guitar track. Also the XLR and ¼ inch outputs are linked and can both be used simultaneously, making it very simple to take two of these units and run an output on each to your DAW and the other outputs to the monitors. Voila, you have a stereo summing amplifier (see, I told you that you’d want two of these).

The front controls are straight-forward as well, giving you Hi Z, Phantom Power, Pad, Polarity Switch, and the aforementioned “tone” button. The polarity button is very handy for recording a stereo mix (see you want two!) where mics are in close proximity and subject to the dreaded phase cancellation. I’ve covered what I think the tone button does but here’s a more technical explanation. The tone button adds 6 dB of gain as well as drops the impedance from 600 ohms to 150 ohms. This is very good for ribbon mics but in most cases, I’ve used it more as a color boost to add the extra analog into electric guitar tracks. Also, the 20 dB pad is very handy for loud guitar amps and drums. You pretty much have all bases covered from high SPL instruments (with the pad) to quieter ones (with the total of 71 dB combined with the tone button).

So all of the features are great but let’s get down to brass tax, the sound. I really don’t want to appear like I’m exaggerating but there’s no way around it on this review. The name justifies the functionality. If you’re looking for that old console sound that adds soul to a very digital world, you can stop looking. Most of the preamps out there claim the “vintage sound”, but only throw tubes and poor circuitry at you to cut cost. The end result is a muddy sounding preamp that you have to EQ to kingdom come in your DAW. The WA12 has found a way to give you a discrete preamp, with custom designed transformers, that still somehow crush the competition in both price and sound. The best part is that you get the analog feel, without it overpowering the track. When the tone button isn’t engaged, you get a very transparent sound with a very balanced low end, but the tone adds a character to it that is almost exclusive to this preamp. It reminds me of the character the Universal Audio 710 has with the blend knob that is between the solid state and the tube leaning slightly more to the tube side, except the WA has more clarity. But a good reviewer has to bring in actual physical comparisons and not just opinions, so I’m going to break into my own studio’s arsenal to compare them.

Note: Audio to prove this is coming soon to the review. I just have to get the files organized.

The three units for comparison come at a much heftier price tag, but I will break each of these units down by price of one channel out of the unit. I love matching, so I used the Blue Spark (review here) with the focus button not engaged. Spark is only $200 so I’m not trying to church the amp up with an overpriced mic. We’re going for cost efficient for the purposes of this review.

First, we have the SSL VHD coming in at $1629.00. That’s roughly $407.00 per channel, which isn’t terrible; but also remember that SSL is an extremely big name in audio, so even going head to head is no easy feat. The SSL also features a similar feature to the tone button with its Variable Harmonic Drive that is said to add a harmonic distortion to color the track. This makes the two very similar in that way but not completely. I metered the two as closely to each other as I could and, I have to say, the WA12 held up very easily. It seems to have more bottom end on just about every application. The clarity is fairly close, but the WA12 slightly better. You really have to push the SSL to get the sweet spot with the VHD knob but the tone button seems to add its character at any level.

The second unit is an actual piece of tube gear. I even wanted to put it up against a piece of gear that’s sole purpose is a warm sound, so I used the Blue Robbie; a one channel coming in at $799. This was an easy win for the WA12. The Robbie is a great preamp especially for bass. I almost use it exclusively for every bass track I put in, but in any other application it falls short, lacking the highs. Although the WA12 didn’t compare as well in the bass department, it definitely was a clear leader in this comparison.

I decided since the WA12 did so well with the other pres, I would throw a wild card at it. So, our third model is a channel from a Millennia HV3 series. Millennia is known for their clean, uncolored sound so in all actuality, these two aren’t even in the same style of preamp. I have enough confidence in this pre that I will put the WA12s silky smooth highs and open sound against a crystal clear $800 channel.

The Warm Audio unit definitely held its own. Though the Millennia had slightly more highs, the Millennia’s sole purpose is transparent sound. The WA12 had a smoother overall tone and could deliver a clean, open sound without the tone button engaged but could still throw down the old school with the button in. The other thing is the versatility with the Millennia. The WA12 has the polarity, high z and tone button. Millennia… as incredible as it is, is very one-dimensional. This is an important thing for the professional studio but even a bigger deal for the home studio. The average musician doesn’t have a great deal of disposable income. He or she needs a “Swiss Army Knife” in their arsenal that takes most of the post processing out of the recording task. The WA does that at half of the price of the Millennia while still delivering a broader spectrum of sound.

In summary, I have no summary. Don’t just stand here. GO order one right now. Your wallet and ears will thank me. Also, be on the lookout for the review complete with audio to back these claims; coming very soon.
For more info, click HERE to go to Warm Audio’s website?.
To buy, click HERE and HERE.