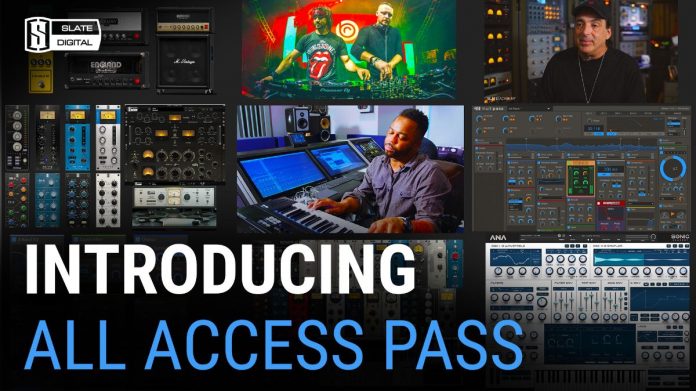 People may not like Slate’s marketing style or call his products overhyped, but the man makes good products and drives a hard bargain with this new All Access Pass. At $150.00 a year, his plugins alone are worth it.

Now he’s offering an entire ecosystem of his plugins, partnership plugins, and now Slate Academy. I’ve actually watched a few of his own tutorials on mixing and the guy has chops. These videos aren’t just him either. He’s got Chris Lord Alge, Just Blaze, and Sevenn.

On top of new partnerships, Slate has released its first soft synth with ANA2

I’m going to give you a tour of the new ALL ACCESS PASS that we just launched about five seconds ago. Even if you weren’t quite into the previous “Everything Bundle” which this replaces, I think it may be worth a read because there is a TON of new stuff happening, and it’s more than just plugins.

First, I want you to know that our goal with the ALL ACCESS PASS is simple: to offer you a ton of value – including plugins, virtual instruments, masterclass courses, and soon . . . MUCH more, without making you spend a lot of money.

Slate Academy:
Slate Academy aims to be the most comprehensive online music production school on the planet. Period. That’s a bold statement, which means we’ll have to do bold things.

So we’ve gathered up some of the biggest names in the industry to teach you all of the pro techniques that have made them the legends they are today.

Courses like these from other online schools would cost you around $300 alone, but it’s now part of the NEW ALL ACCESS PASS!

For the first time ever, you not only get to see how legends perform their craft, but also experience the entire process in your own studio, following along with every decision, every plugin setting, and every single technique.

Slate Academy also includes curriculum courses from beginner levels to advanced in all genres, as well as masterclasses in major DAWslike Ableton, Logic, and more! When you log in after joining, you’ll already see a 30-part Compression Masterclass, which will help you understand everything there is to know about this all-important tool.

Slate Academy will also be an invaluable resource for up-and-coming artists, with courses in music marketing, songwriting, and more coming soon!

Kilohearts Bundle:
For the first time in probably forever, this next announcement leaves me at a loss for words, because it’s hard to describe just how powerful the Kilohearts Bundle is. But don’t worry, I’ll try 😉

The Kilohearts Bundle adds 28 incredible new multi-FX plugins to the All Access Pass. Many of these individual plugins are truly groundbreaking. For instance, the Transient Designer is by far the best I’ve ever heard and sounds equally as good on individual tracks or full mixes.

But it’s the ability to use the 28 plugins in the Multipass and Snap Heap plugin shells that makes this bundle an absolute GAME-CHANGER!

Multipass allows you to create your own customized multiband processors using all of the 28 Kilohearts plugins. Let that sink in for a second.

Sure, you now have mastering multiband compressors, multiband stereo wideners, multiband distortion / saturators . . . but where it gets really fun and revolutionary is when you start combining everything together and stacking each multiband zone to make custom multiband processes that are impossible in any other tool.

Want to build a custom multiband chain with a distortion on the lows, an LFO-modulated formant filter on the low mids, a reversed reverb in the upper mids, and a trance gate on the highs? Now you can.

Or even create and use more utility processors like a multiband sidechainer that ducks the low end of the bass every time your kick drum hits, so that your low end gets tight and huge. Pretty cool, right?

If this sounds intimidating, don’t worry, because there are tons of great presets to get you started, including some featured preset plugins we’ve made like Destructo, a multiband vintage saturator; Smoothinator, a de-harshing plugin; 808 Fattener, which does exactly what the name says; and even a Vintage Tube Compressor, which is a super fat-sounding limiter with a tube output stage.

And finally, there’s the 40-PART Kilohearts Masterclass Seriesthat will make you a Kilohearts NINJA!

ANA2:
Our final announcement for the NEW ALL ACCESS PASS launch is the addition of our first virtual instrument, and we’re starting with something really special.

ANA 2 comes with over 500 presets, but the Slate All Access Pass version adds another 300 presets created by top sound designers, over 200 custom wavetables, and over 200 custom samples ranging from famous 808s to plucks to special FX.

Folks, I have never experienced a synth like ANA 2. The sound, the features, and the versatility are simply unparalleled. The pros who I’ve introduced it to have been floored.

And once again, we’ll help you get started with an 18-part Masterclass, which will leave you a master of your ANA 2 craft.

With ANA 2, you’ll be producing killer tracks within minutes!

For more information and to get 2 months free for signing up (introductory offer), visit https://www.slatedigital.com/