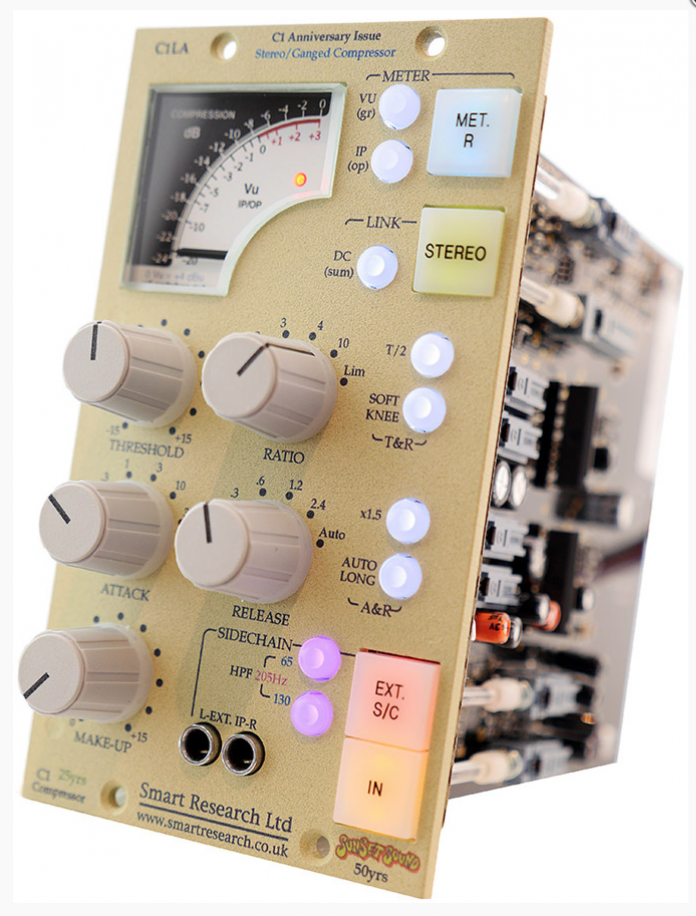 As soon as Smart Research and 500 Series showed up in a Vintage King email, I stopped what I was doing. Smart Research is responsible for some of the closest adaptations of classic SSL Gear. They even make a protocol link to connect Pro Tools to your SSL (if you’re so lucky). Now you can get the same power found in the 1U rack-mounted version of the classic buss compressor. This unit is commissioned by Smart Research’s American distributor, Sunset Sound. Hey, if Joe Barressi uses it, you know it’s good.

The Smart Research C1LA is a two channel compressor/limiter, released to commemorate the 25th anniversary of the original C1 Stereo/Dual Mono unit, and the 50th anniversary of North American distributor, Sunset Sound. It is a versatile unit, housed in a two-module wide 500-series format, with three main modes of operation offering a range of possibilities. It can be used for all stereo or single channel signal applications: as a main mix bus compressor; for sub-mixes; or for tracking either mono or stereo sources.
For 25 years Smart Research compressors have been used across many mixes: with artists as diverse as the Rolling Stones to the Three Tenors. The C1LA shares this history by including the same electronics and settings as the original C1, but with several new features.
A Tri-Mode C1
Each channel can either be used independently, or in Stereo mode both are summed into the side-chain to eliminate any image shift. The C1LA also has the ability to DC-Link the side-chain signals in Stereo mode, allowing for more movement, while still preserving the stereo image. And for those who prefer to compress both sides of a mix without linking: when operating independently both channelʼs controls are ganged.
Mix Glue
The essence of the sound is determined by its dynamic performance: the way it reacts around transients creating its signature. In many situations, best results can be from medium-slow attack; and medium-fast release settings: passing transients present in a signal, while the compression law and timings then played out as the side-chain reacts and recovers both controls the overall levels and adds ʻpunchʼ as the transients are shaped. The ʻSOFTʼ mode in the C1LA also adds a new compression curve, acting not just at the threshold knee point, but across a broad input range of about 15dB.
Features: