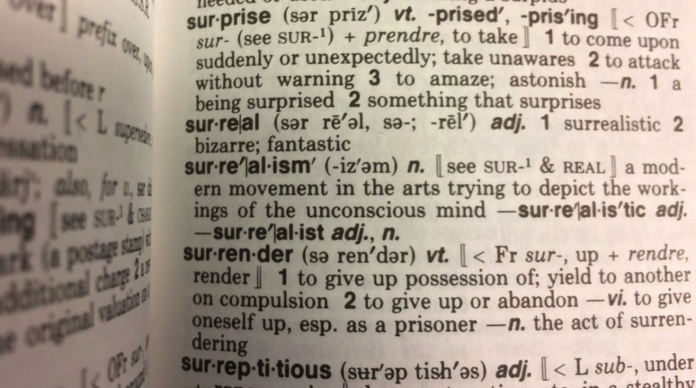 “Mojo.” “Warmth.” “Punchy.” “Forward.” Few professions trade in the glut of buzzwords, idioms and analogies quite like audio production. These pieces of hazy phraseology serve not only to describe the seemingly indescribable, but force others to nod along knowingly, lest you discover they have no idea what the hell you’re talking about.

But this year, EverythingRecording is turning the tables. There’s no better buzzword than the one you create yourself and then unleash upon your preferred online forum or user group. Whether you’re describing your latest mix, plug-in patch or mysterious piece of audio outboard, these promise to keep you one step ahead of the trend curve.

Let’s meet back in a year and marvel at how much these wind up being appropriated or somehow misused from their (my) original intent, shall we?

“Man, I listened back to those drum stems and they’re completely hashed from all that limiting. Can we bounce them again through a summing mixer?”

While most audio processes seem to be fixated on doing the reverse, “hashed” could best be described as audio that has clearly been down the digital rabbit hole. Listen to a bad mp3 encoding, an overly bit-crushed sample or a mix that’s been crunched into unpleasant realms of digital distortion. That’s “hashed”. Your buttery smooth tube compressor is no match for audio that’s become hashed by too many conversions, bad recordings, re-re-encodings or brickwall limiting algorithms. Unless you’re doing it intentionally, it’s not good. Oftentimes, hashed is best used to describe the early use of digital conversion in products like the Adat. But get that same sound out of an SP-1200 drum machine and it’s magically good again. Use to taste.

“Were you serious with that Disney-ass vocal effect? C’mon, lay off the Auto-Tune, this is folk music.”

Whether it was done intentionally or not the first time, the audio production world often creates new and interesting bits of trickery. Reversed reverbs. The LMC drum smash. Cher’s “Believe” or Britney Spears’ aggressive notch filtered vocals. The first time you heard them you said, “Oh, wow, cool. Good turn.” The second time you said, “Hey, that’s kind of a ripoff of the first time.” And six months later, four new plugins are released with the singular purpose of doing that Disney effect. Use at your own risk, lest you be accused of doing it to your own productions. Can be used to your advantage with clients who want to sound “just like…” another artist quite easily.

“When that goes into the last hook from the bridge, the mix gets so moist you could dip your finger in it!”

If effects are all mixed on a level from dry to wet, then what do we call the result? That’s right – the word everyone loves to hate, the Nickelback of adjectives itself. The term “moist”, normally reserved for cake mixes and Harlequin romance novels, indicates the result of that mixing wetness. It’s thick, it’s plushy, there’s a lot of sponginess to it. It’s uh… it’s moist. What’s interesting here is that the word can be used to praise or denigrate ones’ efforts. Moist, great for shoegazey dream pop, not so much for Brutal Dethcore.

“It’s a good song, but those glampled kicks and guitars make it sound like everything else out there.”

With retriggering cementing its way as a go-to method of music production, it’s quite possible to produce a song entirely from patches and samples from your influences. One could license the drums, guitar tones and vocal settings from an artist or producer and create a song that, to the untrained ear, would sound like it was from the same album. In an industry that claims to favor originality but often rewards mimicry, “glampled” is far more the latter. Go mike up your own kick and snare for once and lay off the SSD, ferchrissakes.

“THE PEOPLE UNDER THE STAIRS”

“You might want to check your bus compression there, the people under the stairs are banging on the floor.”

The TR-808 drum machine’s bass drum sound has created more music sub-genres than the electric guitar. Starting with 80’s rap and funk, the monolithic “DUMMMMMMMM” of a simple sine-wave has worked its way into the collective music listening consciousness. Still, to this day, EDM production-types talk endlessly about “mUh 8o8’s”, which now includes any sub-bass sounds, regardless of origin. This is also a notoriously unwieldy octave to record, mix and reproduce as it brings your equipment and its ability to process it alongside the rest to its knees. So careful with “the people under the stairs”, okay? That’s why compressors with high-pass filters are a godsend.

“Why are we pulling that session back up? We’re just bonking now. Bounce it down and send it to the client.”

Time it was, you had until the end of your time in the studio to get a project done. At 12:01, your mix turned into a pumpkin, the patchbays were pulled and your finished work existed solely on a tiny little DAT tape. Well, that was then – and the DAW brought about an era where you never had to be “done” done. Being able to go back and fix “that one little thing” is great, but it’s ushered in the ability to endlessly go back and tweak and tweak and tweak some more. At a certain point? You’re just bonking. It’s not getting better, it’s just getting different-er. Those little imperfections can sometimes be the very thing that gives a song its character – so don’t bonk them out of existence. FYI: “Bonking” is borrowed from road bike parlance, where the rider simply runs out of energy and can’t push one more mile.

(The byproduct too much online learning and not enough doing.)

“The last thing I need is read one more Ü-GÜBER on Reddit going on about gain staging for his db lufs levels.”

The internet was initially conceived not as a haven for free pornography or political arguments, but as a centralized hub to exchange information. Online channels and sites abound, where newcomers and enthusiasts can learn tools and techniques from industry professionals. That’s great and all, until said newcomers and enthusiasts declare themselves authorities themselves, buoyed by knowledge but never applying it on anything beyond their latest SoundCloud hit. You know the type (and if you’re getting ready to flame me for gatekeeping, you ARE the type) – they’re graduates of YouTube Audio Engineering Society and ready to share their forum-informed mastery with you, the lowly hack. Able to talk in long strings of syntax about sidechaining this and saturating that, but without the practical experience of having mastered it themselves. And while it’s true, knowledge is power – so is turning off YouTube for a while and experimenting. When they snort, cross their arms and inform you Dave Pensado always hi-passes the snare at 80hz, just ignore them and carry on.

(The weakest link. The bad apple that spoils the bushel.)

Signal flow is a crucial building block for quality production work. People spend ungodly sums on microphones, processors, monitors, converters… all in search of a holy grail signal path that spins lead into gold. A mistake many mortals make? Not seeing that quality all the way through from end to end. You might have dropped hundreds (if not thousands) on a beautiful preamp, only to plug a garden variety Chineumann from Guitar Center into it. Or investing in a truly professional set of monitors, then installing them against the wall of an untreated room (no, egg crate foam doesn’t count). The “clink” is the thing that drags down all of the niceties before and after – a $10 cable can destroy the sound of a $2000 guitar and amp, no problemo.

(Cousin Oliver. A pointless or unwanted addition to an otherwise solid piece of work.)

“I loved where that track was going until they dropped that WACKY neighbor in on the hook. Who puts banjo in dubstep?”

Eons ago, when television sitcoms were commonplace, writers would attempt to freshen a sagging series with the addition of an ancillary character. We may not be watching The Brady Bunch these days, but the idea of adding an unexpected “something new” is still very much a thing. And sometimes? Sometimes it’s just what the doctor ordered, even if the doctor never thought to order it in the first place. Other times? Holy hell, your listeners are left scratching their heads why someone would add a Mellotron to black metal or a castrati choir to their mixtape. We’re not saying “don’t take chances” here, that’s a big part of the fun. But learn to filter out those ill-advised “different for the sake of being different” type additions. Lots of things “seemed like a good idea at the time”, you know.

(Staunch traditionalist. Anti-digital. Fixated on the past.)

“We’ve got a 40-piece orchestra in here and this DS Penis thinks we’ve got everything we need to record it on his MacBook.”

The Anal Log’s natural enemy in the wild. Equally as aggravating but from precisely the opposite direction. The DS Penis will swear to you up and down that their software sounds exactly like the hardware (if not better), though they will often eventually admit that they’ve never actually worked with whatever’s being emulated. Whether it’s for recording, mixing, mastering or even monitoring, they’ll claim that an SM57 and a pair of headphones will magically put you in Abbey Road’s control room with an entire locker of microphones and preamps. The DS Penis is also referred to in software marketing groups as “a soft target”. (“Just tell them “it’s better” along with some advertising gibberish about 128x oversampled 64-bit algorithms. It’s not like they’re going to ever touch the real gear anyways.”)

Anyways, like any other time I write my opinions down, somebody’s going to get offended and email Brian. I’d hope that this, like any of my other musings, are taken with the appropriate grain of salt. Happy New Year and I’ll try to be nice in 2021.