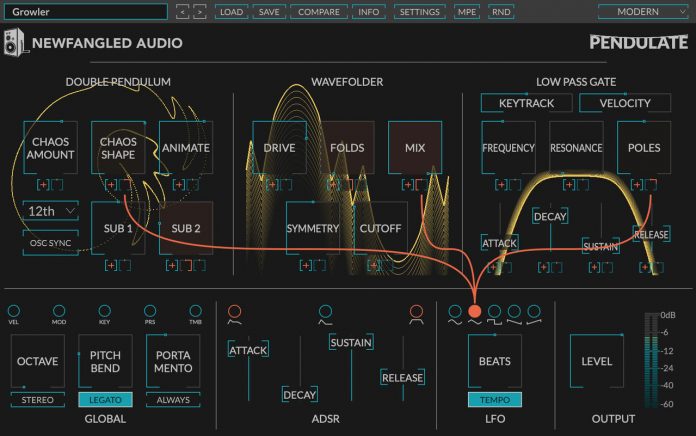 For those bored of the same old synth sounds, Newfangled Audio’s Pendulate offers something truly new – and free. Most synthesizers sound similar because they’re based on the same technologies. Pendulate is refreshingly different – a chaotic monosynth that uses a brand-new oscillator technique to create previously unheard sounds – biting basses, searing leads, and gritty textures. Pendulate, distributed by Eventide, is available for immediate download free of charge.

Pendulate is based on the physics of a double pendulum. What initially looks like randomness contains underlying patterns, interconnectedness, constant feedback loops, repetition, self-similarity, fractals, and self-organization. When designing the Pendulate oscillator, great care was taken to bring out these underlying patterns. The result is an oscillator that can smoothly fade from a sine wave to total chaos, with an expanse of territory to explore in between.
Pendulate’s chaotic oscillator is matched with a wavefolder and low pass gate inspired by the ideas of legendary synthesizer designer Don Buchla. These three modules – oscillator, wavefolder, and gate – combine to make previously inconceivable sounds.

Every parameter in Pendulate’s three modules can be modulated by an included Envelope Generator or LFO, or by MIDI and MPE sources. The innovative modulation interface allows users to easily and quickly patch any combination of sources to any destination, creating sounds that compel the listener to move with them.

Pendulate’s wavefolder is based on a pioneering design from the Buchla 259 Complex Waveform Generator, adding MIX and CUTOFF functions. The low pass gate in Pendulate is based on the Buchla 292’s gate, adding controls for POLES and RESONANCE. Pendulate’s Envelope Generator and LFO each have multiple outputs generated simultaneously, like a modular synth should. Every modulation output can be applied to every control in the monosynth, resulting in up to 221 modulation points, viewed and controlled in an intuitive single pane. The Double Pendulum, Wavefolder, and Low Pass Gate modules each have animations to show how each module responds to input, and to modulation. Along with three unique color schemes to customize the synth’s appearance, 136 Presets provide a launch point for creating experimentation – including artist presets from Matt Lange (Producer, DJ) and Matthew Wang (Composer Film/TV).