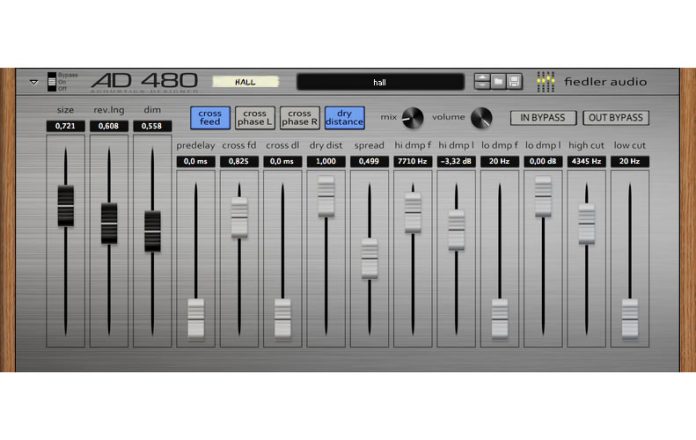 Fielder audio has delved into the world of Propellerhead’s proprietary Rack Extension format with a new reverb. The AD 480 is a tweaked emulation of the reverbs of days past. Now with a few more options, you can get this new reverb for your Reason projects.

Fiedler Audio/ Munich, Germany, March 23th, 2015 (ictw) – Fiedler Audio have just launched the AD 480 Reverb Rack Extension for Propellerhead Reason and Reason Essentials. The AD 480 Reverb now makes its first desktop appearance on the Rack Extension platform after its successful life as an App for iOS devices. Now that legendary, big machine, dense and warm reverb sound that makes great records and epic live sound is available for Reason.
The AD 480 Reverb RE algorithm is inspired by the sound of the sought after studio reverb units that were only available for the big budget recording studios and major touring acts.
The AD 480 Reverb RE is capable of simulating a great variety of acoustic spaces and its parameters allow to shape the sound in many different ways. The Parameter “size” practically provides an “algorithm” – a set of reflections – from a continuous range of values corresponding to a certain room size and thereby offering a lot more freedom than other reverbs with fixed “algorithms” (room sizes). Powerful filters shape the sonic color of the reverb tail and the “cross feed” function enables to control the directional behavior of the reverb tail according to the panorama angle of the input signal. The unique “dim” parameter determines the spatial dimensions of the reverb without influencing its first reflection pattern. At this parameter’s maximum the reverb is identical to the AD 480 Reverb for iOS.
The back panel of the AD 480 Reverb RE offers stereo outputs for the mixed signal as well as for wet and dry separated, providing great routing flexibility. The vast number of CV-inputs allow to automate and modulate almost all of the AD 480 Reverb REs parameters and support discovering entirely new ways to creatively use reverb in any kind of audio production.
Features Overview
professional reverb sound effect with variable room size
reverb time and spatial dimensions independently tweakable
extensive filter layout for a wide spectrum of sound
54 new presets with unique sound
108 excellent presets from the iOS version
separate outputs for mixed, wet and dry signals for flexible routing
20 CV-inputs for insane modulation

Pricing & Availability
The Fiedler AD 480 Reverb RE is available from the Propellerhead Rack Extension Store for Euro 69,- and USD 85,-